The remains of a chapel of the late 12th century are situated in this place, explored in 2019-2020 by the archaeological expedition of the National Conservation Area “St. Sophia of Kyiv” led by Tymur Bobrovskyi.

The chapel was a four-pillar building measuring 5×8 m, built of plinth and cement mortar on stone “dry” laid foundations.

The originality of the construction of this building is in the absence of side walls on its southern, western and northern sides, where open arches were arranged between the pillars erected on separate foundations. The eastern pair of pillars, resting on an integral monumental platform, was connected by an outwards outbowed partition, which formed an apse designed to accommodate the altar space of the chapel. The arches resting on the pillars of the building probably supported a low dome covered with lead plate with a diameter of about 3–3.5 m. The surfaces of the masonry were covered with white lime plaster, devoid of any decoration, and the floor of the building was probably wooden and only in the altar part it had brick paving.

The historical circumstances of the construction of this chapel are unknown, as it is not mentioned in ancient written sources, and the remains were accidentally discovered during excavations in 2018. Archaeological finds, building materials and some features of the building allow to date its construction to the late 12th century, proving the involvement of Smolensk masters. A label with the name Davyd recorded on one of the plinths may indicate the connection of this chapel with the “fraternal agreement” concluded in 1195 between the Kyivan and Smolensk princes — Riuryk and Davyd Rostyslavychi.

The chapel existed for a short time and at the end of the 14th century was already in a ruined state. Its aboveground remains were fully dismantled around the 17th century; at the same time, the basement of one of the pillars was practically destroyed by the basement of some monastery building.

Today the remains of the building of the late 12th century are in a conserved state, and their contours are traced on the surface of modern materials.

Fig. 1. Plan of the chapel remains of the late 12th century according to the results of archaeological research in 2019–2020 (drawing by T. Bobrovskyi) 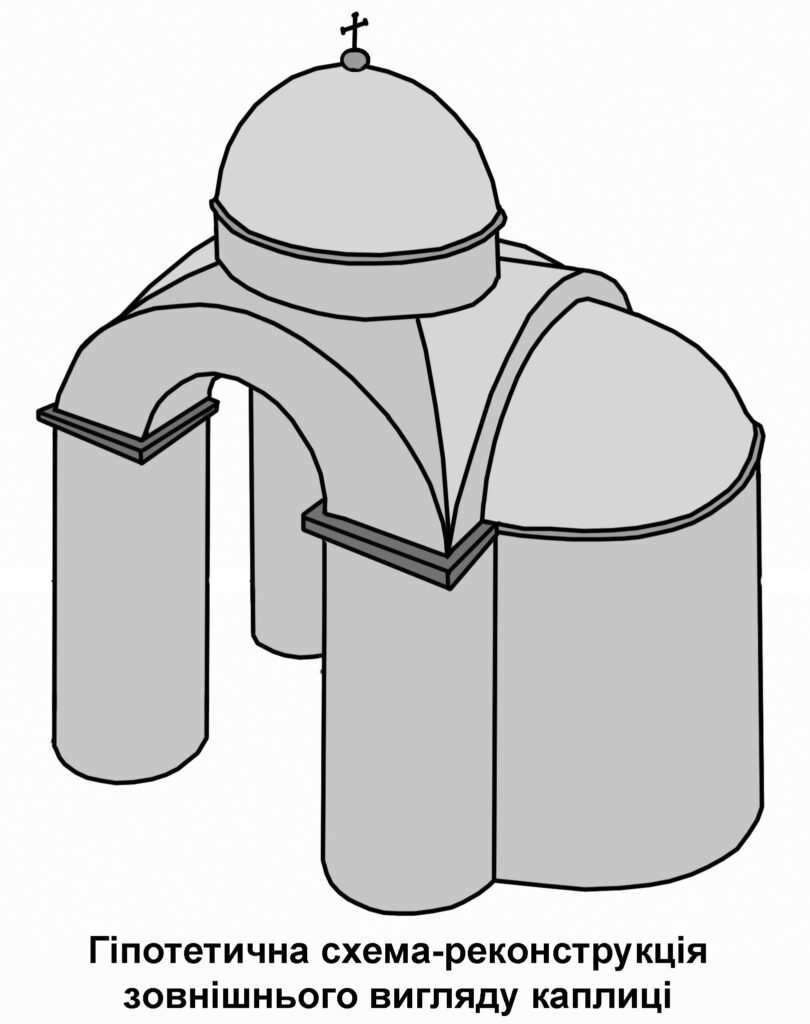