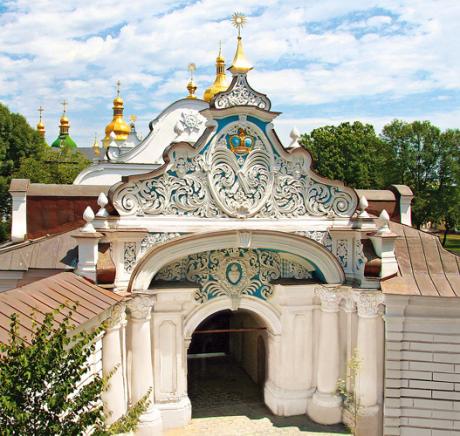 In the 18th century the Metropolitan’s Residence had a separate entrance from the city – the triumphal Zaborovsky Gate, which led to the street from the Golden Gate. This is one of the best works of J.G. Schedel, built in 1745 by order of Metropolitan Raphail (Zaborovsky) in honor of the renewal in 1743 of the Kyiv metropolitanate. The western façade with a pediment and part of the walls built near it have been preserved from the Gate. It was near Zaborovsky Gate that the walls closed the fence around the estate of the Sophia Monastery. In the 18th century the gate was a rectangular stone structure with an arched passage 3.2 m wide.

From the yard on both sides of the driveway were square guard rooms – corps de garde, two on each side. In the corner of the south-west room was a spiral staircase leading to a spacious attic. Adjacent to the Gate is a stone fence of the 18th century, which reaches a height of 4 m. The grandeur of Zaborovsky Gate enhances its rich decor. The gate is flanked by two pairs of perspective columns with lush Corinthian capitals. The front pair of columns supports an ornamented parapet, which perspectively extends to the arch, which rests on the second pair of columns. A magnificent baroque pediment rises above the arch, completely covered with stucco ornaments. The center of the ornamental composition is the mitre under the crossed branches of a palm tree – a symbol of spiritual power and a sign of the revived metropolitanate. The stucco ornament of the tympanum, which was formed between the arches, contains a cartouche with the family emblem of Zaborovsky – a burning heart with a cross on it as a symbol of love for God. The eastern facade of the Gate is also decorated with a high baroque pediment. With the construction of the city, Brama found itself in the narrow St. George’s Lane, so in 1822-1823 it was walled up, the corps de garde were dismantled, and a garden was laid out on the site of the metropolitan court. The building was revived in its original forms in 2007-2009. 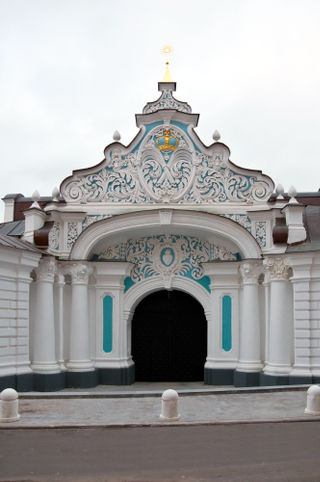 At the beginning of the 19th century, after planning the carriageway of St. George’s Lane, the ground level near the Gate was raised to 1 m, as a result of which the basement and bases of the columns were underground. The monument has lost its previous proportions, its visual perception has significantly deteriorated. Unfortunately, its historical function of the western passage to the metropolitan courtyard was also lost. In 1822–1823 it was walled up, the corps de garde were dismantled, and a garden was laid out on the site of the metropolitan court. All that remains of the monument is its western wall with an archway and a pediment with stucco decoration.

During its existence, the monument was carefully studied – measurements and drawings of the Gate in different years were made by architects A.I. Melensky, Ya.A. Steinberg, M.J. Kresalny.

Current restoration works were carried out. In the early 20th century the gate attracted the attention of members of the Kyiv Society for the Preservation of Antiquities and Art. The members of the society were in favor of removing the alluvial soil from the side of the alley, digging out the Gate to its original level, properly draining the rainwater and opening free access to the Sophia courtyard through it. However, these intentions, under various circumstances, never materialized.

According to the results of research 1982-1983 architect R. P. Bykova in the institute “UkrNDIproekrestavratsiya” developed a project to restore the monument in its original form. No work was carried out on the developed project due to lack of funding. Only at the beginning of the 21th century the project was adjusted by the architect V.M. Bezyakin. According to the project, after consultations with UNESCO / ICOMOS experts, Ukrrestavratsiya Corporation carried out restoration and renewal work on the site. 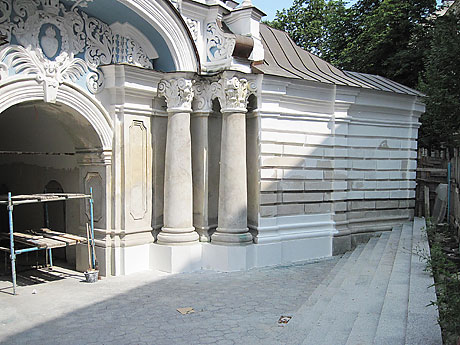 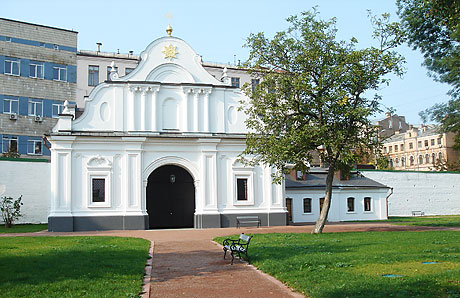 The tympana of the pediment are embellished with decorative niches: rectangular with a semicircular finish in the center of the lower tier (between the semi-columns), two oval niches on the sides of the pediment

The modern Zaborovsky Gate is a building with an authentic western facade, rebuilt during the restoration works of 2007-2009. Reconstruction of the corde-guard premises with an arched passage was carried out on the original foundations with a complete reproduction of the Baroque forms of the monument.

Zaborovsky Gate is a part of the wall system of the south-western part of the ensemble of St. Sophia Cathedral. Located parallel to the western facade of the Metropolitan’s Residence, it forms together with it the metropolitan court. In the current urban situation, the monument is surrounded by high front buildings of St. George’s Lane. However, thanks to the bright baroque forms, it still remains its main architectural dominant.

Zaborovsky Gate is one of the few surviving stone buildings of Ukrainian civil architecture of the 18th century, designed in the tradition of the Baroque architectural style. It is an integral and important part of the ensemble of St. Sophia Cathedral, which is included in the UNESCO World Heritage List.

Saturation of the facades of Zaborovsky Gate with architectural decor: columns in semicircular niches, the use of the method of unfastening architectural details, torn pediment, perspective placement of details, etc., creates a rich light and shade game, which gives the structure an exceptionally picturesque character and extraordinary blue walls – festive and light. The stucco decoration of the Gate was supposedly made by I. and S. Stobensky, who worked on the decoration of the Sophia Bell Tower.