In March 2021, the exposition of the Sophia Museum was supplemented by a 3D hologram, which shows the three-dimensional face of the young Prince Yaroslav the Wise. This reconstruction was created in 2017 by the team of Ukrainian specialists. The authors of the film “Ukraine. The return of its history” reconstructed the appearance of Yaroslav the Wise in 3D and compared it with the work of sculptor-anthropologist M. Herasymov, who in 1939, having the original skull of Prince Yaroslav, made a sculptural portrait of him.

A team of more than 30 experts was involved in the new Ukrainian reconstruction of Yaroslav the Wise’s face, including art expert Yurii Shatailo and forensic expert Andrii Pereidenko. Specialists worked on creating a face of the Kyivan prince within the framework of the 1+1 TV channel project “Ukraine. The return of its history”, co-authored by Akim Halimov (Ukrainian journalist, screenwriter, producer), and directed by Dariia Sarycheva.

Pereidenko Andrii Oleksandrovych – Deputy Head of the Laboratory, Head of the Department of Artistic, Psychological Research and Research of Intellectual Property Objects of the Kyiv Research Forensic Center of the Ministry of Internal Affairs of Ukraine. A.O. Pereidenko has the qualification of a forensic expert in forensic examination “Phototechnical, portrait and holographic image”. In particular, personal identification with the help of material images (photographs, portraits, drawings, etc.).

The face of Yaroslav the Wise was reconstructed using the methods of historical and forensic examination (based on a sculptural model of the skull, which was made by Mykhailo Herasymov in 1939) and a subjective art portrait.

The method of subjective portrait is used in criminology (since 1952 the author of the method – P. Shabo). This method allows you to make a holistic view of a person’s appearance. Currently, various technical devices and computer programs are used to make a subjective portrait (most often “Photofit”, “Portrait”, “Image”).

The use of the technique of subjective art critic portrait involves the study of life images. After a comprehensive analysis of historical sources and lifetime images, the personality is created collectively. This technique is used when there is no human skull. To do this, a set of historical sources and a set of characteristics that relate to this person is studied, as well as the forms of closest relatives are studied to distinguish common features.

The team of authors of the project found a lifetime image of Yaroslav the Wise and his descendants on old seals and in manuscripts preserved in Europe. In particular, the image of the grandson of Prince Yaroslav the Wise – Yaropolk, contained in the pages of the “Gertrude Psalter”. Miniatures from the “Izbornik of Sviatoslav” [Sviatoslav’s Collection] of 1073 were also studied.

The handwritten “Gertrude Psalter” / Egbert Psalter / Trier Psalter (now preserved in Cividale del Friuli, Italy) of the end of the 10th century contains 5 miniatures of Byzantine writing. In the mid-10th century, the book belonged to Gertrude, whose husband was Iziaslav Yaroslavovych I, son of Yaroslav the Wise. Among these miniatures, the greatest interest in the work of the project “Ukraine. The return of its history” took a miniature depicting Gertrude herself, her son Yaropolk and his wife Iryna.

The image of the young Yaroslav the Wise is carved on a massive lead bull (round seal), which was found by archaeologists in 1994 in Velykyi Novgorod and dated to the first third of the 11th century. Researchers V. Yanin and P. Haidukov suppose that the seal was made during the early Kyiv reign of the prince. Until recently, it was a unique portrait seal of Yaroslav the Wise. On one side of it the heavenly patron of Yaroslav – St. George was depicted, on the other one there was a portrait of the prince himself. The bust in a helmet and cloak, fastened at the right shoulder with a clasp, was accompanied by the inscription: “Yaroslav, Prince of Rus.”

Yaroslav Volodymyrovych is relatively young on the seal, most likely beardless. The most significant detail in the appearance of the prince is the so-called “cavalry mustache” (not even Semen Budionnyi, but Janis Fabriciuss). Valentyn Yanin proposed to make a portrait of the young prince Yaroslav the Wise, but then this project was not realized.

In the fall of 2014, “black archaeologists” found two more similar bulls: one in the modern Poltava region, the location of the other is not specified. Both bulls found on the territory of Ukraine are stored in private collections. At the same time, one of the seals depicts the prince as a young man (as on the bull from Novgorod), the other depicts Yaroslav the Wise with a mustache and a small beard, a more mature man.

According to forensic scientists, the image created by the method of subjective portrait can be trusted. The obtained image, according to Akim Halimov and Andrii Pereidenko, is the most approximate image of all available today.

To create a portrait of the young Yaroslav the Wise, the author of the project Akim Halimov and the creative team of “1 + 1 Production” searched for and researched the bones of the Rurikovychi that remained in Ukraine. In the “Ancient Chernihiv” and “Ancient Lutsk” Reserves the probable bones of princes Hlib Sviatoslavych, grandson of Yaroslav the Wise, and Dorogobuzh prince Iziaslav Inhvarevych were studied. According to the authors of the project, DNA examination of the two found skulls was conducted in Denmark, in one of the three largest DNA research centers in the world.

Specialists from the Karol Marcinkowski Polish University in Poznan (Poland) recreated the face of a man from a sarcophagus near the Savior Cathedral in Chernihiv. It is probable that this is an image of Prince Hlib Sviatoslavych. Scientists from Poznan University of Medical Sciences and Poznan University of Technology (Wojciech Kotziemba, Michal Rychlik, Dorota Lorkevych-Mushynska) also worked on the reproduction of the appearance of a man whose skull was found in the marble sarcophagus of Yaroslav the Wise in Sophia of Kyiv.

The sculptural portrait created by M. Herasymov, the author of the method of plastic portrait reconstruction, caused some doubts in Akim Halimov and the authors of the project. However, the reconstruction of the new face of Yaroslav the Wise was based on the measurements of the skull of the Kyivan prince, made in 1939 by M. Herasymov.

Anthropological reconstruction, the most reliable of all possible, involves the reproduction of human appearance on bones. In addition to anthropological reconstruction, the so-called external visualization is added, about which the skull bones cannot provide information: the presence or absence of a beard, certain facial features, facial wrinkles, etc.

Scientists do not have the opportunity to study the bones of Prince Yaroslav the Wise of Kyiv. The last study of the contents of the marble sarcophagus in 2009 (the study was initiated by the management of the National Conservation Area “St. Sophia of Kyiv”) revealed that the bones that were placed in the sarcophagus in 1964 did not belong to Yaroslav the Wise. Therefore, scientists and creators of the film “Ukraine. The return of its history” in creating a 3D reconstruction of the face of Yaroslav Volodymyrovych used data obtained during anthropological and radiological research in 1939 by well-known experts D. Rokhlin and V. Hinzburh.

At the initiative of the Director General of the National Conservation Area “St. Sophia of Kyiv” Nelia Kukovalska and with the patronage of the pharmaceutical company “Interchem” led by Director General Anatolii Reder 3D reconstruction of the face of Yaroslav the Wise was included in the exposition of the Sophia Museum.

The glass prism for the 3D hologram was made to order in Denmark by Realfiction, the world’s leading supplier of holographic 3D solutions. The Dreamoc XL3 Realfiction projects high-quality images in three dimensions and allows you to reproduce the smallest details. Interactive content enhances the impression and allows the visitor to be a part of the story.

The pharmaceutical company Interchim engaged a group of “Leater” companies an experienced Ukrainian system integrator and IT solutions provider, to set up the equipment and adjust the hologram. Since 1992 “Leater” has been working in the field of consulting, design, realization and implementation of information and audiovisual technologies, video surveillance systems, integrated security, solutions for training and entertainment. The company has experience in the museum field: in early 2021, the exposition of the Water Information Center (Water Museum) was updated.

For the National Conservation Area “St. Sophia of Kyiv”, the “Leater” integrator company helped to create a historic installation, supplied and adjusted the equipment of the hologram, a three-dimensional model of the face of Yaroslav the Wise.

The visual range of the 3D hologram is complemented by audio. This is a quote from “The Tale of Bygone Years”, a kind of testament of Yaroslav the Wise to his sons (according to researchers, a later insert to “The Tale of Bygone Years”): “… And if you are in love with each other, then God will be in you. And he will subdue your enemies under you, and you will live in peace. But if you live in hatred, strifing together, you will perish, and you will destroy the land of your fathers and grandfathers. Therefore, obey your brother, live peacefully among yourselves.”

Portrait of a person buried in the Savior Cathedral of Chernihiv. Probably Prince Hlib Sviatoslavych (? – † 1216/1219). Reconstruction was made by specialists of Poznan University of Medical Sciences. 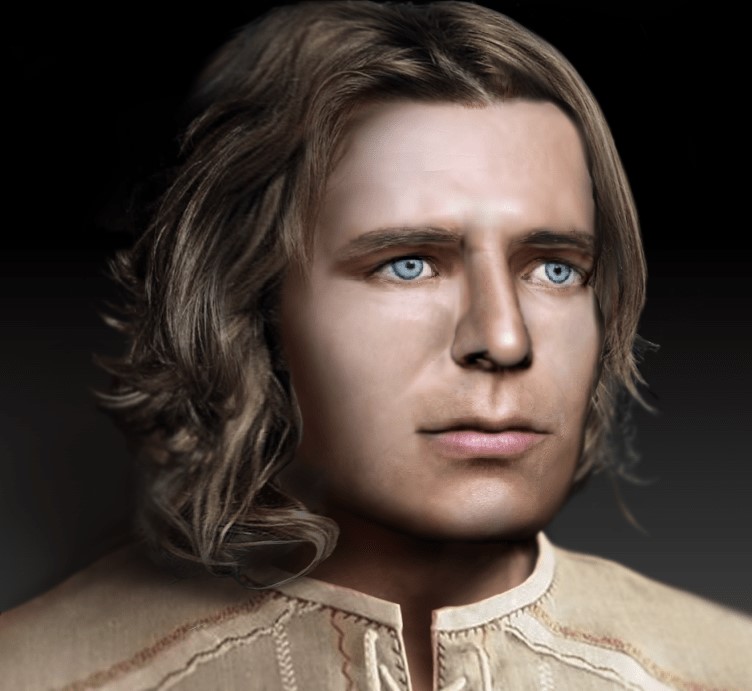 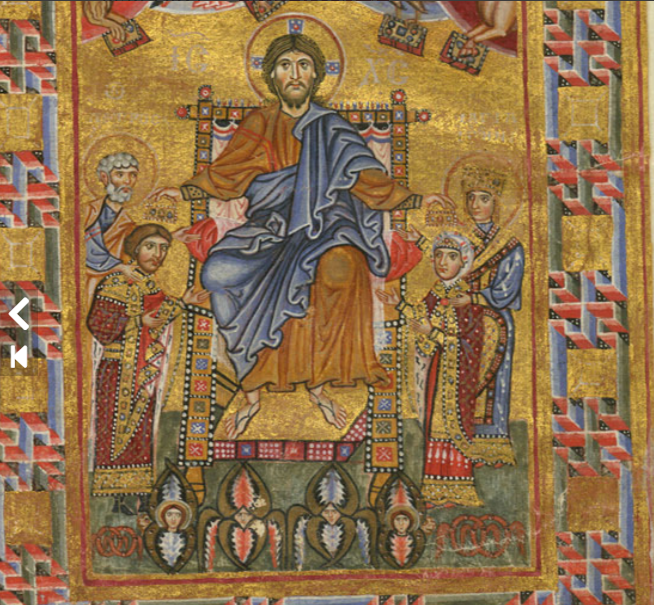 A miniature from Gertrude Psalter (mid-11th century): an image of Yaropolk and his wife Iryna in front of the Apostle Peter. Gertrude falls at the feet of the apostle. 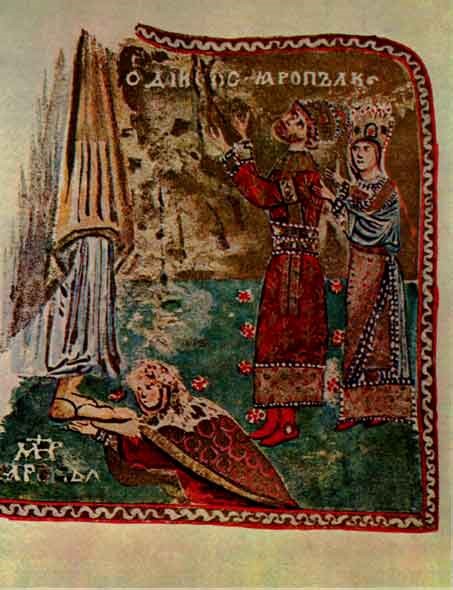 Miniature (fragment) from the “Izbornik of Sviatoslav” in 1073. In the foreground – Prince Sviatoslav (the third son of Yaroslav the Wise and Iryna-Ingigerda), who presents the book to the Savior. Next to him – the princess (possibly Oda Stadenska) with her youngest son Yaroslav, in the background – the eldest sons (Roman, Davyd, Oleh). 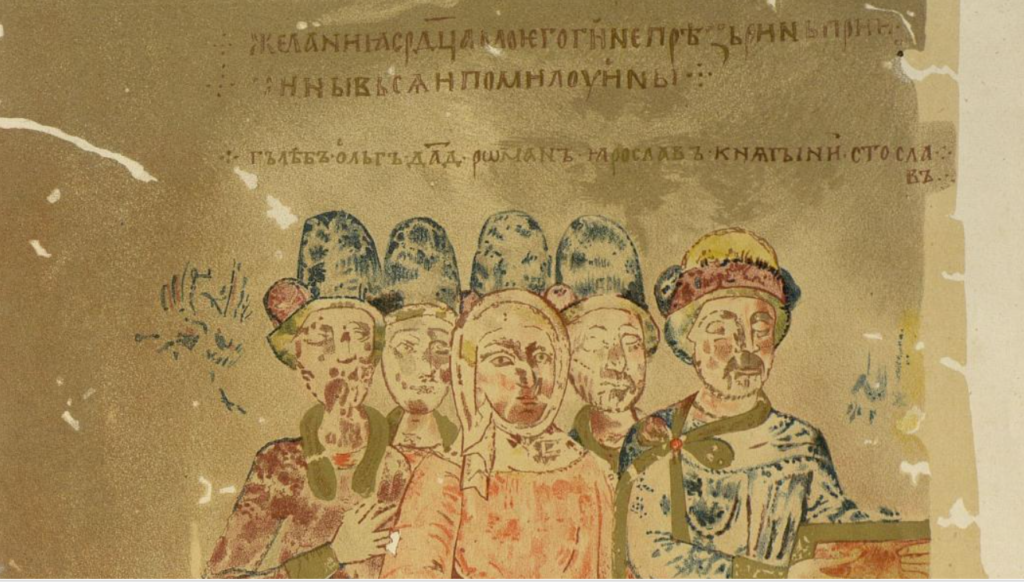 Lead seals (bulls) of Yaroslav the Wise (finds of 1994 in Novhorod, Trinity excavation; finds of “black archaeologists” in the Poltava region in 2014 (stored in private collections)). 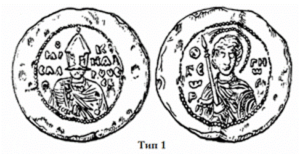 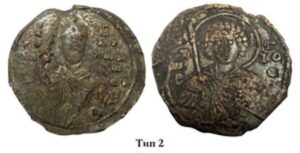 Sculptural portrait of Yaroslav the Wise. Plastic reconstruction of M. Herasymov, created on the basis of anthropological and radiological examination of the skeleton of a marble sarcophagus in St. Sophia Cathedral (1939, study by D. Rokhlin, V. Hinzburh). 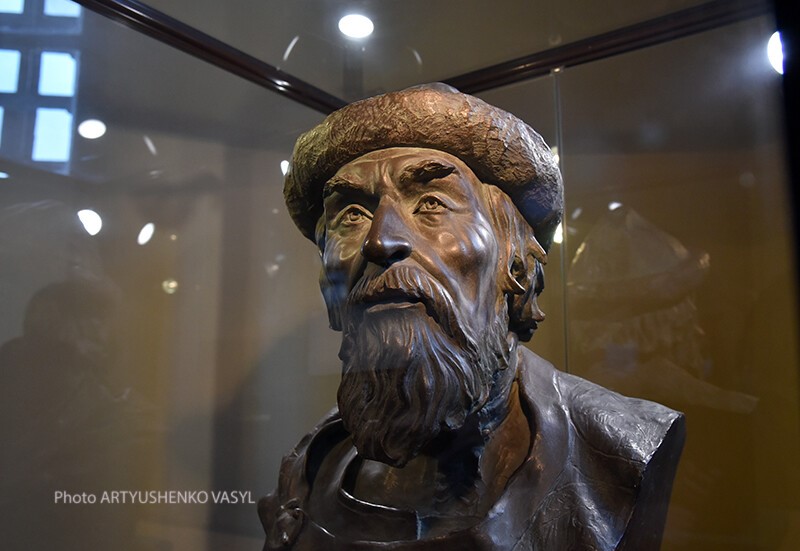 The face of Yaroslav the Wise, reconstructed using the methods of historical forensics and subjective art critic portrait. Authors of reconstruction A. Pereidenko, Yu. Shatailo. 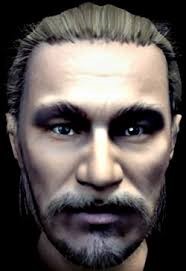