Home » Monuments reveal: from scientific works of employees » The work of the housekeeper of the Sophiiskyi archiereus house  of the late 18th - early 19th century

Upon arrival in Kyiv, each newly appointed metropolitan received a housekeeper with its employees, who were united in the Kyiv-Sophia archiereus house. This institution had its own structure with the division of responsibilities. The metropolitan was in charge of the house structure, he had a managerial role.

Executive power was delegated to the economic board. It included: housekeeper, treasurer, commissioner. Their task was to organize and control the work of the house staff, to preserve the cathedral treasury, to monitor the movement of funds and the execution of the orders of the metropolitan. Also, they had to take care of the integrity of the entire estate and contribute to the growth of the household – economy. Among the members of the board was the chief economist. In the late eighteenth – early nineteenth century men, representatives of the black clergy, abbots or hieromonks were appointed to this position, who were later ordained abbots.

A candidate for economic obedience must have a number of skills: be honest, educated, attentive and have certain skills in conducting economic and business activities. The post itself appeared in the structure of the house in 1786, but only on September 15, 1800 the Metropolitan of Kyiv Gavryil (Bănulescu-Bodoni) issued a resolution on streamlining the activities of the Economic Board. The document describes the powers and tasks, both for the board as a whole and for each of its members separately, including the housekeeper – is characterized by the following words: “The position of the economist is not limited: it requires constant diligent and reliable care for both the preservation and the increment of economy and order”.

To effectively perform these duties, you need to have good health and youthful energy, wrote the longtime economist Abbot Raphail: “the position of housekeeper, which in its vastness and constant care requires a healthy and well-mannered man, and not as old as mine,” at that time he was at least 67 years old.

The difficulty of performing the work was the considerable volume of the economy. Up to 80 people worked in the Sophiiskyi archiereus house. The territory at the disposal of the Kyiv metropolitans included: the Sophiskyii metropolitan house together with the accompanying farm buildings, country dachas on Shuliavka, Kudriavka, a farmyard in Pankovshchyna, fishing on Zaspa Lake, lands on Teremky, Belohorodka. It was not easy for the metropolitans to find the right person among the monks for the position of housekeeper. Having found a successful candidate, they were in no hurry to be released from the archiereus house, and sometimes returned to economic obedience. For example, in the late eighteenth – early nineteenth century Abbot Raphail became the record holder for the length of service in this position – a total of 18 years, was fired three times and twice returned to the archiereus house.

One of the last problems faced by each housekeeper in his position was the transfer of all the property of the archiereus farm to the newly appointed housekeeper. Difficulties in this process arose due to improper accounting of property. Accordingly, the transfer revealed a shortage. Kyiv metropolitans have repeatedly drawn attention to this problem. Instructing the housekeepers to have descriptions listing all the state property that was in the archiereus estates, as well as the obligation to make monthly information on the state of the economy. Based on such instructions of the metropolitans, every detail was registered and in case of its damage this fact was immediately revealed, the guilty compensated the loss, and a corresponding mark was made in the register. That is, there should have been no problems with the transfer of property from the previous to the newly appointed housekeeper.

However, real life is not so perfect. With each transfer of property there was a lack of certain things. To clarify all the circumstances of the disappearance and compensation for the lost, ex-economists were summoned to Kyiv or detained for many months and years after their termination. The following stories are indicative of this. The abbot of the Medvedivskyi St. Nicholas Monastery, Abbot Ioanykii (housekeeper from June 1803 to June 1805), gave his explanations about the former losses in early 1809, i.e. 3.5 years after his termination. Abbot Varsonofii (housekeeper from March 1809 to December 1813), the abbot of the Irdynskyi Holy Dormition (Vynohradskyi) Monastery, was released only in May 1816, after compensating for the lost items by buying and transferring porcelain dishes worth 108 rubles to the archiereus house.

Such a difficult job had some positive aspects. The housekeepers received a monetary reward and the trust of the metropolitan for their obedience. 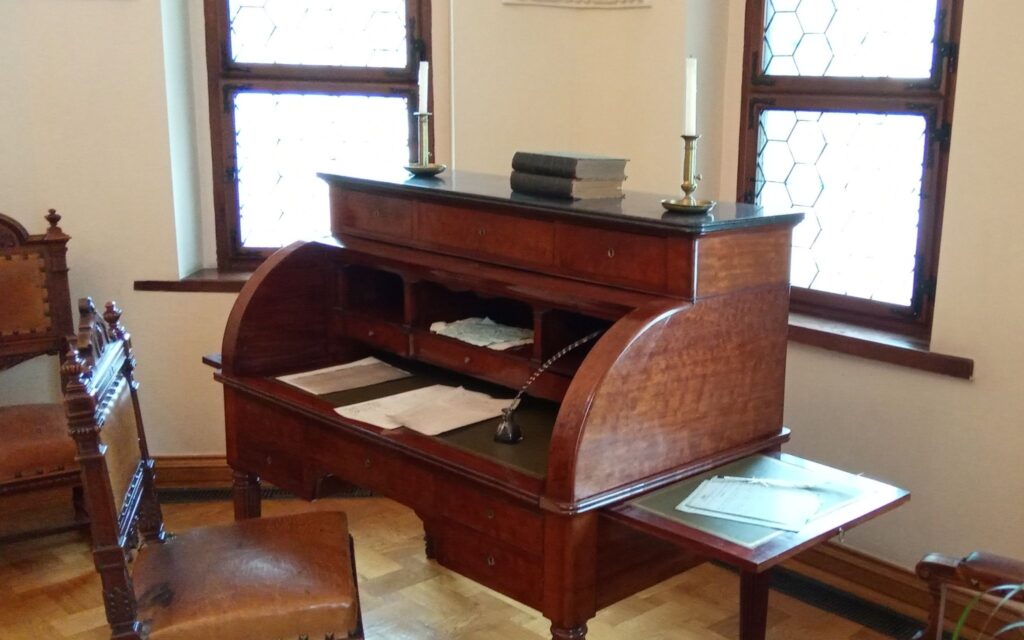 The workplace of the housekeeper and his assistant, a copyist, has been recreated in the interiors of the Metropolitan House Museum. Mahogany desk-cylinder (France, 1840s) 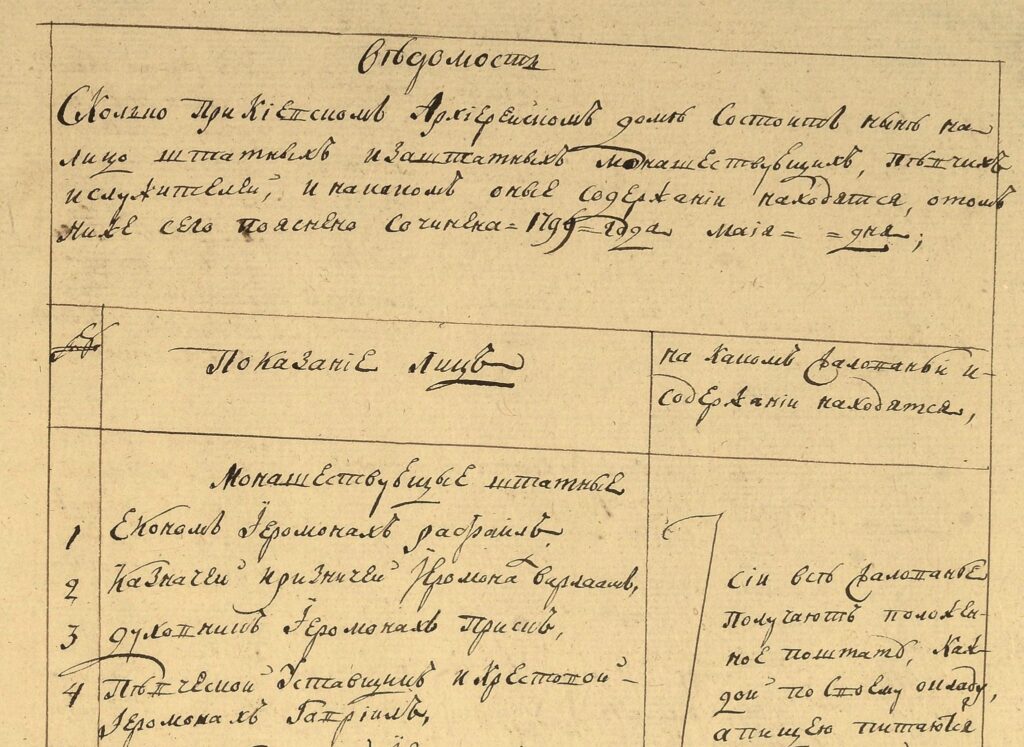 Photocopy of a fragment of information on how many full-time and part-time employees there are at the Kyiv archiereus house: monks, singers and ministers; as well as what content they have. May 1799. Central State Historical Archive of Ukraine, f. 184, des. 1, file no. 3, sheet 5.