The Meeting of Our Lord

Home » news » The Meeting of Our Lord

The Meeting of Our Lord

The composition “The Meeting of our Lord” (19th century), written on the north wall of the central nave of St. Sophia Cathedral (!) In the images of biblical characters conveys the features of contemporaries of the author of this work – Archpriest of St. Sophia Cathedral Petro Lebedyntsev and famous Kyiv philanthropist Mykola Tereshchenko.

The plot of the “Meeting” by the artist of the 19th century Ivan Selezniov appeared on the north wall of the central nave of the cathedral under the northern choirs. There was a custom in ancient Judea: a woman who gave birth to a child was considered unclean, and only after the days of purification she was able to come to the temple in Jerusalem and bring the child there to meet God. If she gave birth to a girl, the period of purification, prohibition – eighty days, if a boy – forty days. So, on the fortieth day after the birth of the Infant Jesus, His mother Mary and her husband Joseph came to the temple. Joseph holds a cage of doves to sacrifice, and Mary has just passed the Baby from her hands to Simeon. According to the Lord, after Simeon sees Christ, he must die. Such punishment was imposed on him by God for his disbelief in the birth and appearance of the Messiah in the world. Simeon was three hundred years old when the Savior was born, and he was already waiting for Him, but not only as deliverance from a long mortal life, but as the Messiah who would bring new faith and salvation to all mankind.

According to legend, the righteous Simeon was one of 70 translators who translated the books of the Old Testament from Hebrew into Greek. When he read, “Behold, the virgin shall conceive, and bear a son” (Isa. 7:14), and he would like to replace the word “virgin” with “woman”. But an angel of the Lord appeared to him and said, “You will see with your own eyes the fulfillment of this prophecy”. Simeon waited in faith until his old age to fulfill God’s promise. The legend says that he lived for 300 years and died the day after he saw the Child Jesus in the Jerusalem temple.

The little Christ in the arms of Elder Simeon represents a new, young, Christian faith that replaces the Jewish faith. The plot symbolizes the meeting of two beliefs, the change of the moon to the sun, night to day, darkness to light, the old world to the new, the people say – winter to spring!

When you look at the scene, you feel that there is something unusual in it and you cannot understand what it is. It seems that everything corresponds to canonical iconography, but something interferes, is not perceived… And finally – eureka! After reviewing the numerous plots of the “Meeting”, in most of them we did not find the image of Christ the Infant wrapped from head to toe! According to the ancient iconographic canon, the Infant Jesus in the composition “Meeting” is never depicted as swaddled. According to the rules, he is kept on a white canvas with open hands and legs, open hair – this is the iconographic type of Christ Immanuel in the “Meeting”. The swaddled infant Christ is shown only in the plot “The Nativity of Jesus Christ” but with an open head.

The search for an explanation prompted a surprisingly popular at the time various illustrations of the well-known miracle of salvation from the Dnieper waves of the baby and finding it near the miraculous icon of St. Nicholas, which was located on the first floor of Sophia of Kyiv.

This story of the miraculous salvation of a child by St. Nicholas became surprisingly popular in the nineteenth century and generated a huge number of artistic interpretations of the plot. The swaddled child was depicted near the miraculous icon of Mykola Mokryi (Wet) on the background of the St. Nicholas altar in the choirs of St. Sophia Cathedral, on other icons – St. Nicholas is holding a baby in diapers, almost identical to the image of Christ the Infant from the mentioned Sophia’s “Meeting”.

It seems that the popularity of the plot and the fact that the icon of Mykola Mokryi in the nineteenth century was located in the western part of the northern choirs of Sophia of Kyiv, just above the composition “Meeting”, inspired Ivan Selezniov the image of the swaddled Christ. Thus, we assume that the unusual image of the Infant in Selezniov’s composition was created under the influence of the iconographic plot of the infant saved by St. Nicholas and symbolized the theme of salvation, which was personified by the Savior himself.

The baby in Simeon’s arms in red (!) veils is depicted at the level of the altar. It seems that the old man will now turn around and place the Child on the altar, because the altar is intended for sacrifice. Christ is the lamb, the sacrifice, which is why the red color of His veils is a symbol of the Savior’s blood. The author combines two themes in one plot – the meeting of a new faith and sacrifice for the sake of humanity.

In the composition we are studying, Ivan Fedorovych Selezniov resorted to the method of portraiture of biblical images. In our opinion, the image of Elder Simeon, surprisingly coincides with the portraits, i.e., the appearance of the archpriest of St. Sophia Cathedral Petro Lebedyntsev. High open forehead, straight nose, long gray beard, beautiful, noble old age.

Joseph, Mary’s husband, who carries doves for sacrifice to the Jerusalem temple, is for sure written off from the face of the famous Kyiv patron, collector Mykola Artemovych Tereshchenko, a good friend of the author of this work – I. Selezniov. The similarity is so obvious that it leaves no doubt about the discovery of the prototype.

The image of Joseph, with portraits and photo portraits of the patron, are united by the same features – the outline of the face, deep pensive eyes, beautiful arched eyebrows, nose shape, hairstyle, especially striking coincidence of mustache and beard. The only difference is Joseph’s gray hair, if we see gray mustaches and beards in Tereshchenko’s portraits, but we did not find his images with pronounced gray hair. This is easily explained, according to the Holy Scripture, Mary’s husband was much older than her, he was over 80 years old and the author emphasizes this age with gray hair.

We are almost certain that female images also have prototypes, which we have not yet discovered. The ascetic, dark-skinned face of the prophetess Anna may have been written off by a servant of St. Sophia Cathedral. The classic, neat features of Maria probably belong to a woman familiar to the artist from his environment.

Thus, according to our research, former and modern visitors of St. Sophia Cathedral in the composition “Meeting” in the images of the characters of the plot had and still have the opportunity to see the portrait features of contemporaries of the author: a prominent religious and educational figure Petro Lebedyntsev; a famous collector of works of art, sponsor and patron of artists of the late 19th– early 20th centuries, Mykola Tereshchenko – a man on the basis of whose collection and in his own home, a modern museum “Kiev Art Gallery” was created, on the funds of which numerous buildings adorning the modern city center Kyiv were erected etc. Ivan Selezniov, by engraving their faces in the paintings of St. Sophia Cathedral, introduced the memory of these outstanding Kyivans into sacred eternity.

Did I. Selezniov’s contemporaries know about these portraits in the images of biblical saints? Undoubtedly, they knew, went to look, perhaps, not so much at the works of the artist, as at the Kyiv acquaintances. However, none of the contemporaries left written memories of this phenomenon, so today we have discovered these prototypes not as a result of studying archival documents, literary memoirs, etc., but purely empirically. At the same time, it is possible that a source will be found soon, that will confirm our perception of the presented images.

It is also significant that the works of this Ukrainian artist, once hidden under a layer of plaster, are now open and revived. 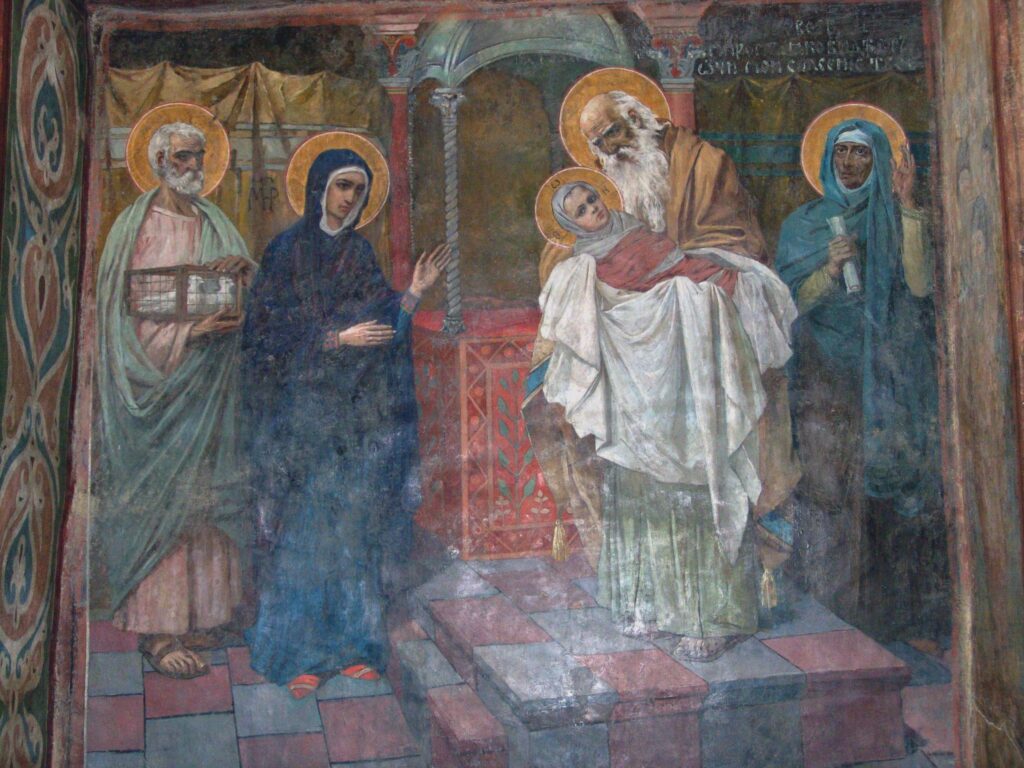 North wall of the central nave of Sophia of Kyiv 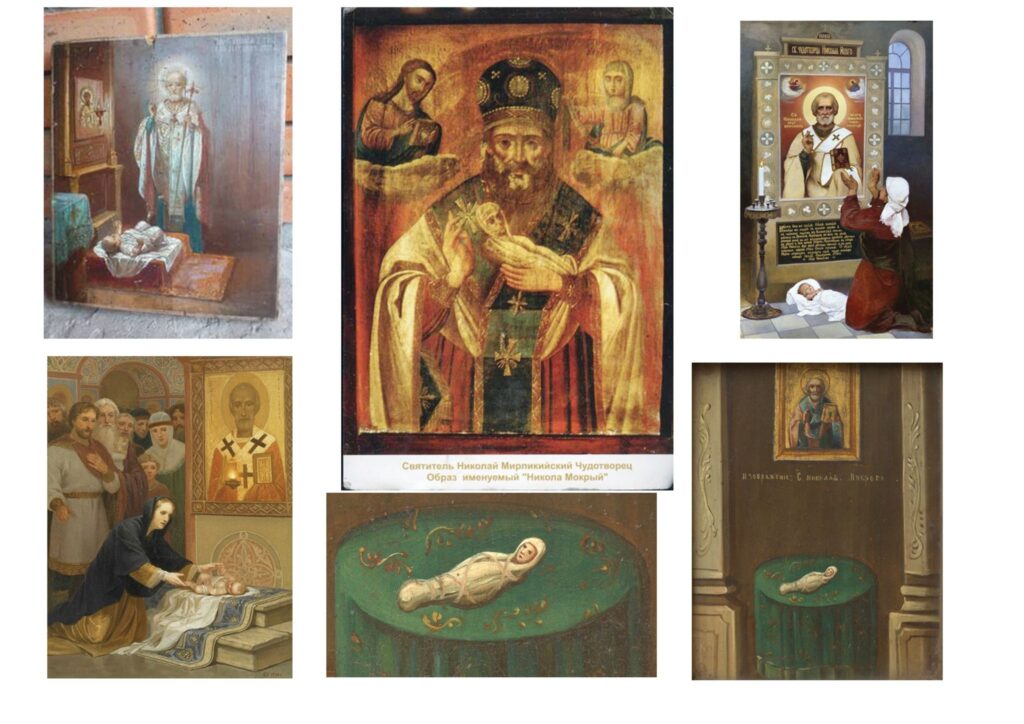 Il. 2 Icons of Mykola Mokryi (Nicholas the Wet) with a rescued baby.

Il. 3 (1) Elder Simeon from the composition “The Meeting of Our Lord”.

Il. 3 (3) The image of an elder from the composition of Ivan Selezniov “The Baptism of Jesus Christ” – a prototype of P. Lebedyntsev.

Il. 4 St. Joseph from the composition “The Meeting of Our Lord”.