The image of St. Ahafia of Palermo (Catania) in Sophia of Kyiv

Home » Monuments reveal: from scientific works of employees » The image of St. Ahafia of Palermo (Catania) in Sophia of Kyiv

The image of St. Ahafia of Palermo (Catania) in Sophia of Kyiv

February 18 is the day of remembrance of St. Ahafia of Palermo (Catania), one of the most famous and revered early Christian saints. Her fresco image is among the best in Sophia of Kyiv. It is depicted on the pillar of the arch-transition from the western division of the chapel of St. Peter the Apostle in the central nave. More than 500 individual images of saints have been preserved in the cathedral, but in the vast majority of cases the inscriptions-names near them have been lost. Research in recent decades has allowed us to identify many saints and understand the principles of their selection and placement. So it happened with the image of St. Ahafia. Previously, it was wrongly defined as St. Barbara the Great Martyr, because this young saint, depicted in rich secular clothes and a beautiful elegant cap, really looks like St. Barbara. But in fact St. Barbara is depicted nearby on the same pillar in the image of a martyr, and three graffiti inscriptions have been found on her image, calling the saint’s name “Barbara”. In the same way in the image of St. An ancient graffiti inscription with the name of the latter was found: “Ohafia”. These inscriptions are a kind of eternal prayers of their authors, often namesakes of saints, to their heavenly patrons. Iconographic confirmation of the definition of the image as St. Ahafia is a 12th century fresco. Novgorod Church of the Savior on Nereditsa, where as in Sophia of Kyiv St. Ahafia is depicted as a young virgin in rich patrician attire and elegant hat. She was born into a noble family in Palermo or Catania (Sicily), died a martyr’s death around 251. Before her death, after terrible torture, the Apostle Peter appeared to her, who miraculously healed her wounds. Therefore, the obvious connection between the image of St. Ahafia on the dedication of this chapel to the Apostle Peter. But here we can trace the local Kyiv context related to the life of the princely couple of the Baptists of Rus-Ukraine Volodymyr the Great and the Byzantine Princess Anna Porphyrogenita, who were the founders and builders of Sophia of Kyiv (1011-1018), completed by Yaroslav the Wise. Anna’s brothers, the emperors Basil II and Constantine VIII in 976-1028 transferred the relics of St. Ahafia in Constantinople, where since the ninth century there was a church in her name. In honor of St. Ahafia (Agata) was named one of the five sisters of the father of these emperors and Princess Anna – Roman II. Princess Anna, who was raised as a small child by Ahata when her mother Theophano was in exile, named Ahata one of her daughters, who was born in marriage to Prince Volodymyr. Sometimes Ahata, in the rare name of which by that time the Byzantine trace is quite clearly traced, is mistakenly called the daughter of Yaroslav, but this is not confirmed by anything. Interestingly, on the adjacent plane of the pillar, next to St. Ahafia (Ahata), we see the image of St. Cyprilla (or Cyrilla) is also named in the graffiti on this mural. St. Cyrilla is called Cyprilla in church calendars of the 10th – 11th centuries, and this name means “little lady”, which is completely consistent with the image of Ahafia depicted in Sophia as the patroness of Princess Ahata Volodymyrivna. No wonder Princess Ahata, who had royal roots after her mother “Tsarina Anna” (as the sources call her), is depicted in a purple dress among the daughters of Volodymyr and Anna in the prince’s portrait in Sophia of Kyiv. Ahata of Kyiv, who was born at the beginning of the 11th century, became the wife of the English prince (later king) Edward the Exile, who lived as a young man at the court of Yaroslav the Wise, who married him to his sister by his father Ahata. 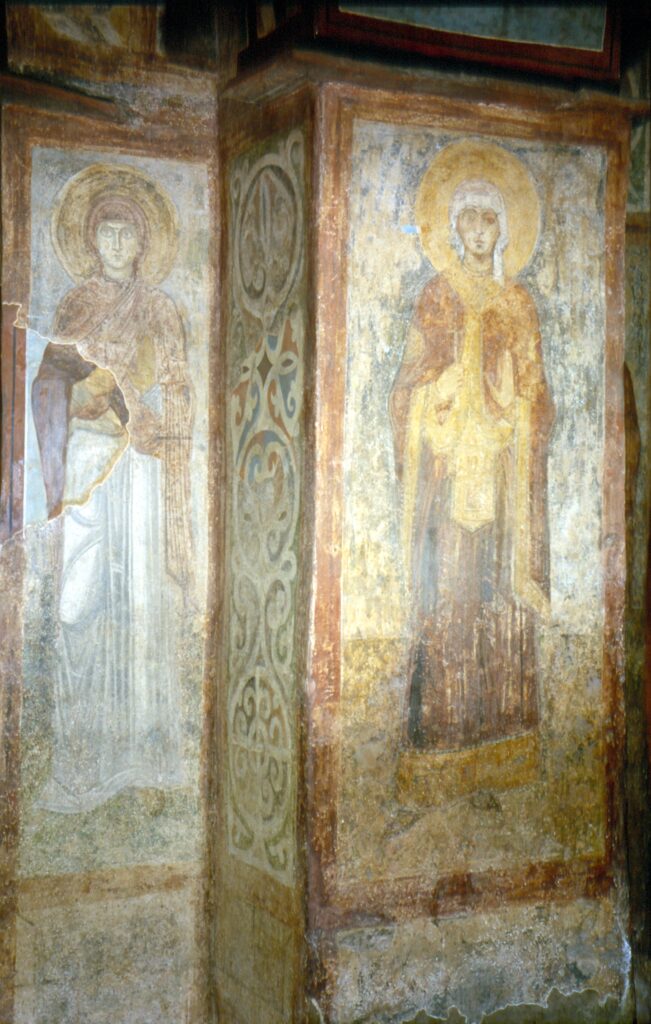 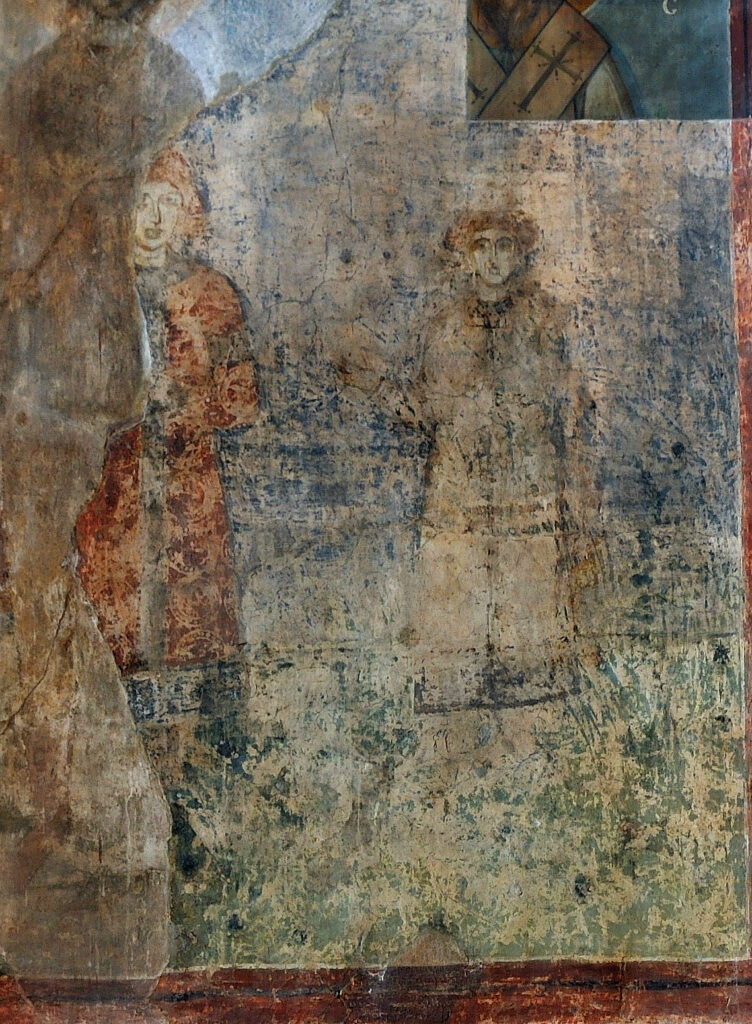