A study of architectural monuments is always accompanied by a visual fixation. Accurate measurements and execution of their drawings (according to the developed standards) are a priority in the research of modern architects. Equally important to history, however, is the artistic reproduction of rare buildings, emotionally colored, devoid of impartial objectivity.

The Cyril Church, a unique ancient monument of Kyiv, is inferior to the volume of fine materials in comparison with the famous sights of the city – the Sophia Cathedral or the Kyiv-Pechersk Lavra, which have always been “under the sights” of artists of different generations. However, the unique image of the temple is reflected in the diverse artistic interpretation of the authors, both past and present. Specialists who have been involved in the study of this old Rus building have not overlooked it.

Among the researchers of architectural achievements of the past are authoritative scientists Georgy Lukomsky (1984-1952) and Boris Roerich (1985-1945). The object of their research in the 20 years of the 20th century is the historical and cultural heritage of Ukraine: they both took care of monuments, made considerable efforts to organize the first art museum in our territory and so on. And as a result – a rich creative achievement of scientists of a wide range of scientific and artistic interests. The artistic heritage of the artists includes works of art dedicated to the Church of Cyril.

Boris Roerich’s painting has a lyric-epic sound. The majestic building is lit by the sunset of the autumn sun. In front of the viewer is the main facade of the Cyril Church with a sophisticated undulating pediment, plastic expressive silhouettes of emerald domes sinking in the thick of a lilac-blue sky. The whimsical rhythms of the bare branches of age-old trees with warm shadows on the walls seem to stir up the evening’s fatigue of an old historical monument. 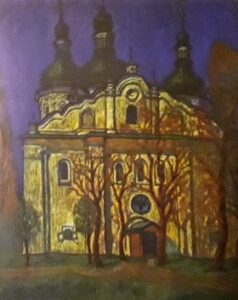 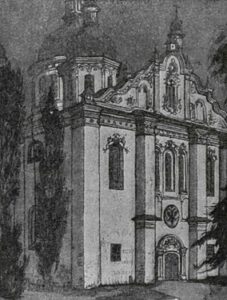 The church of the former Cyril’s monastery. 1911.

The works of Georgy Lukomsky, “a fellow and champion of the Kyiv Baroque”, are distinguished by the acute observations of the art expert. With undisguised enthusiasm, he depicts the Cyril’s Church, an ancient Rus-born monument, dressed in later times in the garments of Ukrainian Baroque. The artist’s meticulous gaze looks at its particularity. It is no coincidence that the foreground image reveals a light-shade game of decorative elements on the facades, a pyramidal structure of the total volumes of the architectural monument. With careful consistency, without unnecessary pettiness, the author emphasizes the monumental grandeur of the structure with purely graphic means.

“In addition to scientists with cold hearts and a withered soul, other people will come and tell everyone about your charming, humble, genuine art; and the time will come – they will cherish and love you with care. Slowly, but such times will come” [“Apollon”, No. 2, 1911].

Have these times come?

P.S. The works are published by reproduced sources.

The author is Ludmila Kryshen