Sophia of Kyiv – a Memorial of the Baptism of Rus-Ukraine: devoted to May, 25

Home » news » Sophia of Kyiv – a Memorial of the Baptism of Rus-Ukraine: devoted to May, 25

Sophia of Kyiv – a Memorial of the Baptism of Rus-Ukraine: devoted to May, 25

Sophia of Kyiv as a symbol of the “golden age” of Rus-Ukraine has always been perceived as a stronghold of its statehood, church and culture. Here, in the main church of the state – the Rus metropolis, the main events of church and state life took place and were consecrated, because Sophia has always been the spiritual heart of Rus-Ukraine. The dedication of the main church of the Kyiv state to St. Sophia of the Wisdom of God corresponds to its significance as a memorial to the baptism of Rus-Ukraine. This tradition comes from the Bible, according to which the wise King Solomon built a temple in honor of the Wisdom of the Creator, where He has always been. The idea of ​​a temple in the name of the Wisdom of God as the earthly House of the Lord God, the main sanctuary of the people, was inherited by the Byzantine and later the Old Rus Church, whose supreme temples were dedicated to Divine Wisdom. That is why from the beginning of Christianity as the state religion of different people in the main centers of the Eastern Christian Oecumene – Constantinople, Thessaloniki, Ohrid, Kyiv, Novgorod, Polotsk – St. Sophia Cathedrals are built. There was an old belief in Kyiv: “As long as Oranta the Unbreakable Wall stands in St. Sophia, so will Kyiv.” That is why the consecrated inscription over the Oranta of Sophia of Kyiv quotes verse 45 of Psalm: “God is within her, she will not be fall, God will help her at break of day.” This is the Heavenly Jerusalem, securely protected by the presence of God from world chaos. The image of the Heavenly Jerusalem (Paradise and the Church of Christ) is both Kyiv and St. Sophia Cathedral – its heart, and every Christian soul.

Based on all this, it is logical to think that the main temple of Rus-Ukraine as the most important symbol of a powerful sovereign state should have appeared in the days of Prince Volodymyr the Holy – the creator and builder of this state. No wonder the glorification of Prince Baptist Volodymyr the Great can be clearly seen in Sophia of Kyiv. The image of Volodymyr is the core, it runs through the entire mural of Sophia, as it had a special state-building significance in the fateful periods of the history of Rus-Ukraine, which is clearly reflected in the history, architecture and monumental painting of St. Sophia Cathedral.

Imposing these days on the chronological outline of the earliest Sophia’s graffiti, which testifies to the origin of Sophia in the second decade of the XI century, I dated its foundation (consecration to the Wisdom of God) on Sunday, November 4, 1011, and completion (consecration-inauguration) on Sunday, May 11, 1018. It is on these dates in the second decade of the eleventh century. Sundays (Lord’s) days fell, in which according to the canons it was possible to consecrate St. Sophia Cathedral. That is, the cathedral was founded and almost completed by Volodymyr in 1011 – 1015, and finally completed by his son Yaroslav in late 1016 – May 1018. That is why Metropolitan Hilarion – an eyewitness to the construction of Sophia of Kyiv – claims that Yaroslav completed the beginnings of Volodymyr, similarly , as Solomon completed the work of his father David in the creation of the Temple in Jerusalem: It is also significant that the consecration of Sophia of Kyiv on May 11 coincides with the day of consecration of the Tithe Church built by Volodymyr, which is mentioned in ancient sources both on May 11 and May 12. In my opinion, on the night of May 11-12, 989, from Saturday to Sunday (as is customary according to the rite), Volodymyr received the sacrament of baptism in Korsun, which was identified at that time with the baptism of all Rus-Ukraine.

The chronology of the consecrations of Sophia of Kyiv is also not accidental, because November 4, 1011 and May 11, 1018 are the dates that sanctified the national history, introduced it into eternity. After all, the year 1011, when Sophia of Kyiv was founded, was the year of Cyrioeaster, because then on March 25, as in the year of the Resurrection of Christ, the Annunciation and Easter coincided. This coincidence, which is very rare, is sacred because it symbolizes the fullness of things, the alpha and omega, the beginning and end of the earthly history of Christ the Savior: “I am the Alpha and the Omega, the Beginning and the End, the First and the Last” (Rev. 22:12 -13). 1018 is the year of the 30th anniversary of the Baptism of Rus, which introduced the people of Rus-Ukraine to the history of Salvation, brought them the Good News and gave them hope for the Resurrection.

Sophia of Kyiv also contains the great mystery of the day of the baptism of Rus-Ukraine, which is now tentatively timed to July 15 (28) – the day of Volodymyr’s death. This mystery is encoded in the composition that symbolizes the ascension of neophytes to Paradise, depicted by St. Epiphanius of Cyprus in his famous sermon on the Resurrection as a symbol of Baptism: “Arise and go from decay to immortality, from darkness to eternal life and light, from sickness to joy, from slavery to freedom, from dungeon in Upper Jerusalem, from earth to heaven.” . In the lower tier of the altar mosaics of Sophia, where the “Holy Order” is located, the Fathers of the Church (saints) are represented, who in word and deed contributed to the victory of Christianity over paganism and heresies. It is noteworthy that a number of saints begin the figure of Epiphanius of Cyprus, on whose day of remembrance, i.e. 12 (25) May, the Tithe Church was consecrated, and this date opened the history and the church calendar of the New Rus-Ukraine, where it was first inscribed. Next to St. Epiphanius is Pope Clement, whose relics were brought from Korsun by Volodymyr, laid in the Tithe Church and they became the first national shrine, because they consecrated the prince’s equal apostolic mission and all of his newly converted Rus-Ukraine. Kyiv cult of St. Clement, an apostle of the Seventy and a disciple of the apostles Peter and Paul, became the justification for the apostolic character of the Rus Church, and Clement himself was perceived as an educator and heavenly patron of Rus.

Based on the fact that the Tithe Church and Sophia are associated with the main event in the history of Rus, its baptism, the date of May 11-12 can be correlated with its culminating episode, namely the baptism of Volodymyr. No wonder the chronicle of the baptism of Rus identifies this event with the personal baptism of Volodymyr – the leader and embodiment of his people. It is known that Volodymyr received the sacrament of baptism in Korsun after the arrival of the Byzantine princess Anna. He seized Korsun, what is well established by sources, only after April 13, 989, after which the emperors Basil II and Constantine VIII sent here at the request of the prince his sister Anna [1]. Given that the sacrament of baptism took place according to the canon on the night from Saturday to Sunday, when Christ resurrected (baptism symbolizes the resurrection with Christ), we can assume that the prince and his fighting wife were baptized in Korsun on the night of 11 to 12 May 989, which fell on Saturday and Sunday [2]. The prince and his wife, according to the notions of those times “all of Rus”, formed the core of the Church as a Christian community. That is why the number of May 12 (25), meaning “birthday” of the Rus Church, reveals its history and the church calendar.

And so Sophia of Kyiv as a 1000-year-old memorial of the baptism of Rus-Ukraine gives us a real opportunity to celebrate this event on May 25. It is very symbolic that this day is chronologically connected with the celebration of the Day of Slavic Literature and Culture (May 24) and the Day of Kyiv (last weekend in May). God and destiny dictated so.

The author is Nadiya Nikitenko. 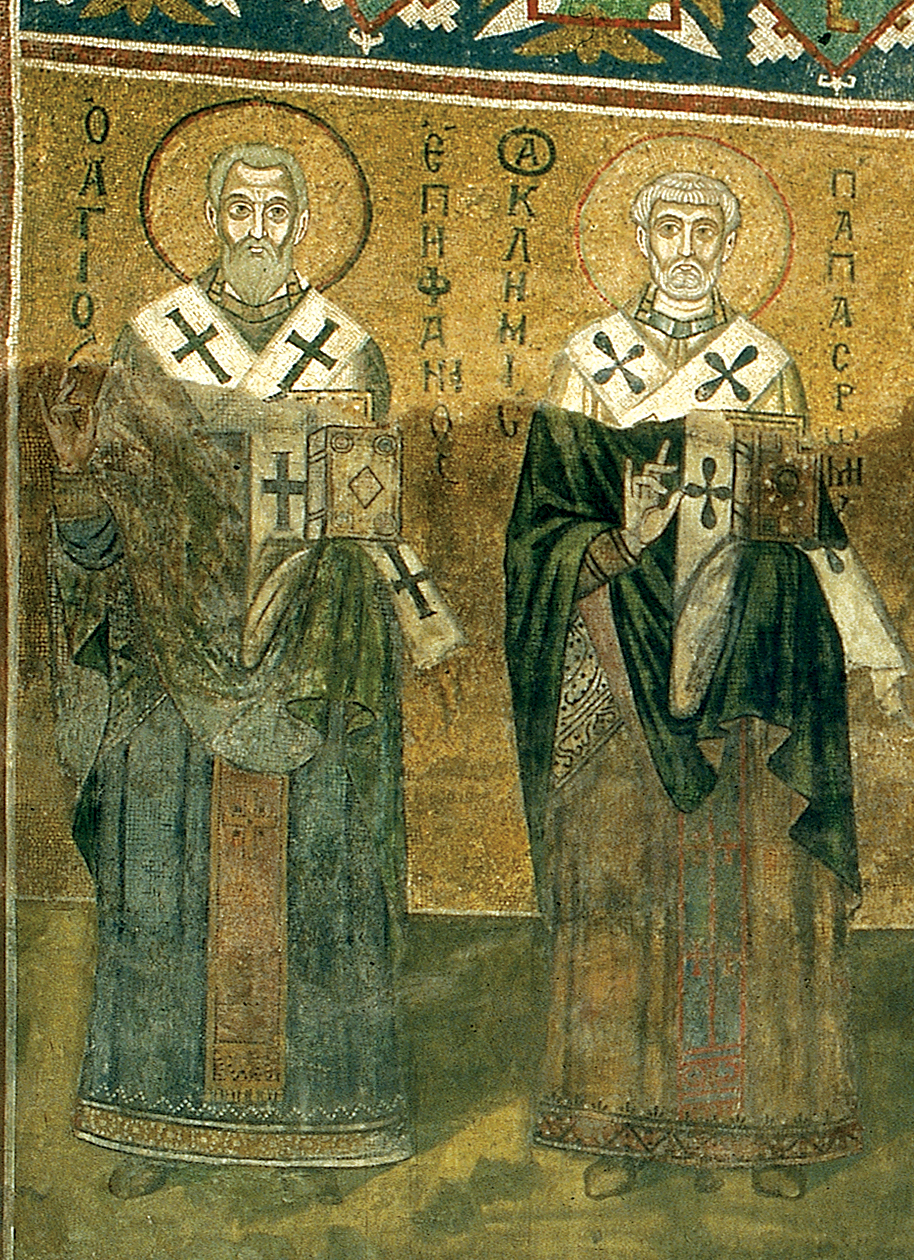