Saints of Sophia of Kyiv. Holy Martyr Panteleimon the Healer

Saints of Sophia of Kyiv. Holy Martyr Panteleimon the Healer

At all times of great trials, people went to Sophia for help, for strengthening spiritual and physical power, healing – both moral and physical. One of the most beloved saints was the great martyr Panteleimon, a non-silver doctor, who was considered to be a great and respected assistant in these matters. And it is no accident that we see him in the fresco of the 11th century, repeated twice, and in the drawing of the 19th century on the arch of the central nave.

The Holy Martyr and Healer Panteleimon was born in Nicomedia in the family of the noble pagan Eustorgius and the Christian Eubula. His name was Pantoleon (translated as “lion-like”), and his parents wanted to see him as a courageous and fearless young man. He attended a pagan school and studied medical skills with the famous doctor Euphrosinos. Endowed with many talents, very good-looking, he became close to the Emperor Maximian, who ordered that Pantoleon becomes his court doctor. At the same time, Pantoleon gets acquainted with Christians Hermolaus, Hermippus and Hermocrates. Hermolaus taught him Christian faith. And, in the name of the Lord, Pantoleon created the first miracle – reviving the dead boy from the bite of the echidna. After that miracle Pantoleon was baptized by Hermolay. Famous as a good doctor, he treats the seriously ill, heals the infirm, helps the needy for free. Seeing the good deeds of the son in the name of Christ, Pantoleon’s father was also baptized as Eustorgius. Maximian, having learned from the denunciation of the envious physicians about his faith, demanded from Pantoleon to deny it. But, having received a firm refusal, he exposed the young man to terrible tortures. During the ordeal, Christ appeared to him and gave him the name Panteleimon, which means “all-merciful.” Maximian, without reaching Panteleimon’s renunciation, ordered to execute him with a sword. After his death, great miracles of healing took place at the funeral and parts of the relics of the saint dispersed as the largest shrine all over the world. The cult of St. Panteleimon spread throughout the Christian world. Churches dedicated to the saint have already appeared in the 4th century, his paintings became popular in murals and icon painting.

In the Orthodox icon tradition, Panteleimon is depicted in the image of a beardless young man, with curly hair in a dark-colored coat with gold sleevelets and collar, with a cloak on his shoulders. With a cross in his hand or with a medicine casket and measuring spoon. He is considered to be the patron saint of doctors, warriors, and is being treated by healing patients. And today, physicians seek for the help of a heavenly helper in such difficult and noble work. 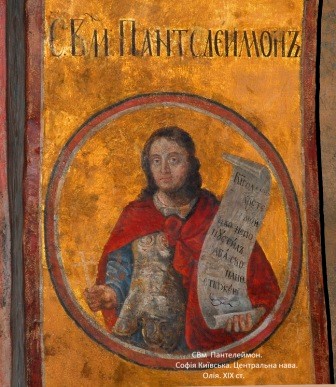 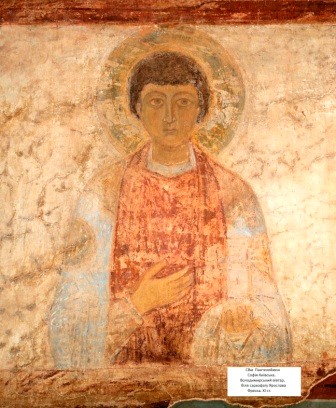