Saint Nina, the enlightener of Georgia on the fresco of St. Sophia of Kyiv

Home » news » Saint Nina, the enlightener of Georgia on the fresco of St. Sophia of Kyiv

Saint Nina, the enlightener of Georgia on the fresco of St. Sophia of Kyiv

January 27 (14 according to the Julian Calendar) commemorates St. Nina, the educator of Georgia. She was born about 280 in the city of Colossae, Cappadocia, where there were many Georgian settlements. Her father, Zabulon, came from a noble family. Saint Nina’s mother, Susanna, was the sister of the Patriarch of Jerusalem (some call him Juvenal). Nina was either a niece or a cousin of the patron saint of Georgia, St. George the great martyr. From her lips the people of Georgia learned about the life and martyrdom of her great brother. St. Nina converted the King of Georgia St. Mirian Equal of the Apostles. In 326 he sent a letter to the Equal of the Apostles kings Constantine and Helen, in which he expressed his intention to accept Christianity with all his people. She died peacefully in 335. Today, the relics of this righteous woman rest in the Bodbe Convent, located in eastern Georgia, two kilometers from the town of Sighnaghi in the historic region of Kakheti. The relics of St. Nina are the main shrine of the Bodbe Diocese of the Georgian Orthodox Church.

In St. Sophia of Kyiv there is a majestic fresco of St. Nina. It is presented in full growth in the south-western compartment of the deacon’s nave, on the northern plane of the pillar of the cross, which features the holy apostolic wives – Empress Helen and the first martyr Thekla. And on the western plane of the pillar, near St. Nina, appears St. Polychronia – mother of St. George the great martyr and aunt of St. Nina. Interestingly, along with St. Nina a large Holy Cross is depicted, which marks the place of laying in the foundation or wall of part of her relics. St. Nina’s beautiful face with black eyebrows, she tilted her head slightly towards the Holy Cross and squinted there. Images of St. Equal of the Apostles queens Helen, Nina and Thekla were of great importance to the Empress (Byzantine princess) Anna Porphyrogenita, who together with her husband Prince Volodymyr the Great christened Rus-Ukraine and brought the Holy Cross to the mountains of Kyiv. 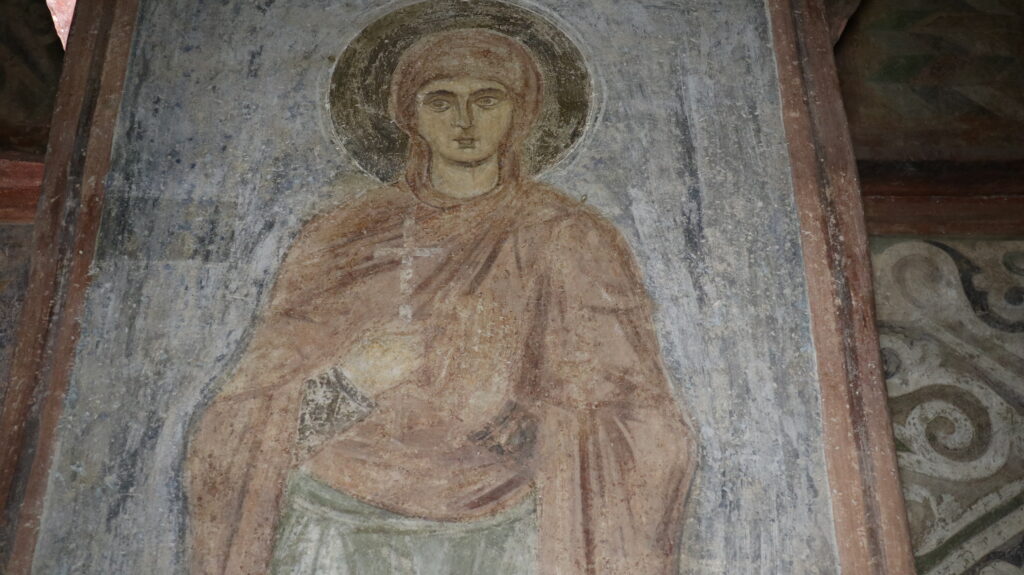 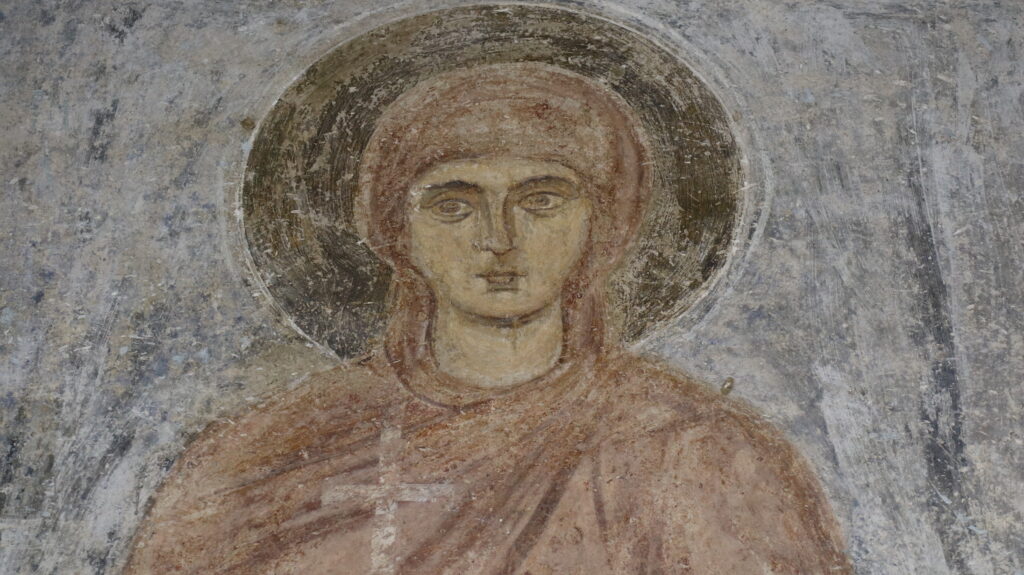