Presentation of the patronage project “Three Generations of Devote Believers”

Presentation of the patronage project “Three Generations of Devote Believers” 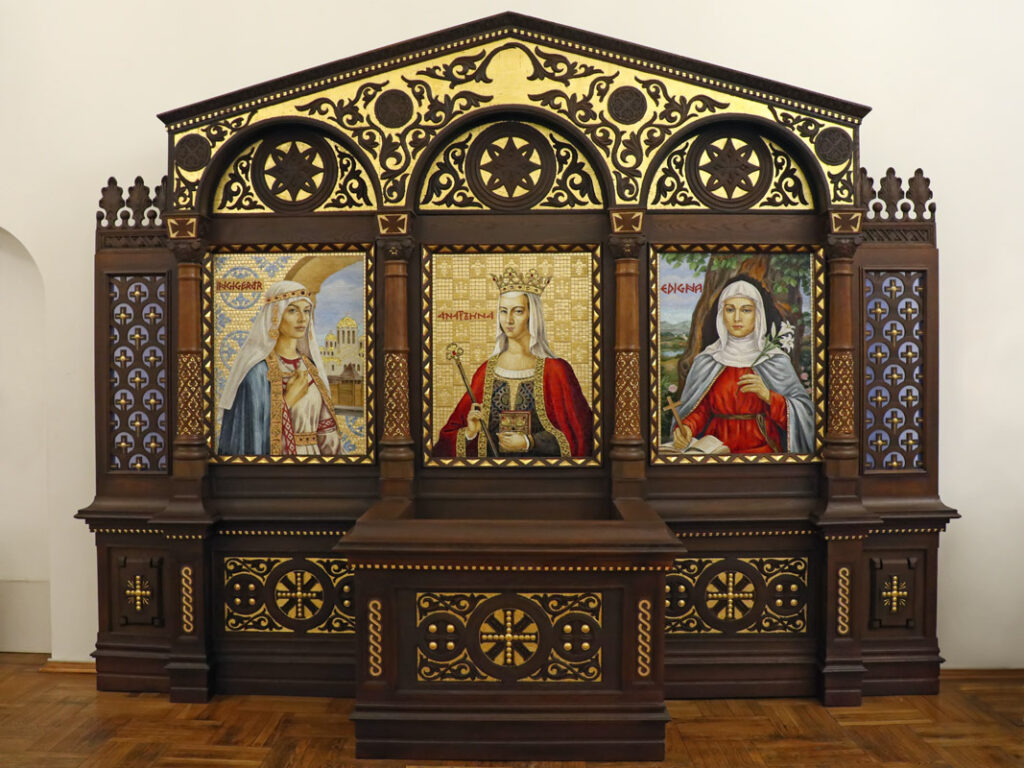 November 18, 2021 at 17.00 in the Cathedral of the National Conservation Area “St. Sophia of Kyiv” ceremonies will be held on the occasion of the donation to the museum of mosaic portraits and carved kiot.

THE PROJECT “Three Generations of Devote Believers” was created by the philanthropists of the National Conservation Area “St. Sophia of Kyiv”, a group of Olos-Ukraine companies and their students. Three mosaics, framed by a masterfully carved kiot made according to authentic 19th century patterns, are dedicated to female images of the dynastic history of Rus-Ukraine – Ingigerda, wife of Grand Duke of Kyiv Yaroslav the Wise, Anna – Princess of Kyiv, daughter of Yaroslav and Ingigerda; and Blessed Edigna – French Princess, heavenly patroness of Bavaria, daughter of Anna Yaroslavna and her husband, King Henry I of France.

The idea of ​​the project is related to the scientific research of the same title “Three Generations of Devote Believers: Ingegerd of Sweden, Anna of Kyiv and Edigna of Bavaria”, which belongs to one of the scholars of the National Conservation Area “St. Sophia of Kyiv” (Dr. Olena Yasynetska).

These female historical figures of Ukrainian-European dynastic history are closely interrelated with the Cathedral of St. Sophia of Kyiv: Princess Ingigerda together with Yaroslav the Wise completed the construction of the cathedral, participated in its decorating and consecration, she was later buried and now rests in the marble sarcophagus of the cathedral. Princess Anne, the future Queen of France, grew up under the vaults of St. Sophia cathedral, and, leaving for distant France, left an autograph-graffiti on its walls. The heavenly patroness of Bavaria, Blessed Edigna, daughter of Anna Yaroslavna and granddaughter of Ingigerda, undeservedly unknown in her ancestors’ homeland, must be rescued from obscurity and properly venerated in Ukraine.

The mosaics were performed by young masters Oleksii Loboda and Zakhar Lukash from the Pivovarov Stained Glass Studio. The kiot was made by famous Ukrainian wood sculptor Olexandr Zakusylo. The mosaic portrait of Anna Yaroslavna was created based on the lithograph of a French master of the 19th century François-Séraphin Delpech, and mosaic portraits of Ingigerda and Edigna – based on paintings by contemporary Ukrainian artist Artur Orlonov.

OLOS Group of Companies jointly with its disciples has created three mosaics and kiot on their own initiative and at their own expense and solemnly donated them to the National Conservation Area “St. Sophia of Kyiv”.

The event will be attended representatives of the Embassies of Sweden, France, Germany in Ukraine, patrons of the Conservation Area, the cultural community, the media.