Our Lady Pecherska and Sophia of Kyiv

Home » news » Our Lady Pecherska and Sophia of Kyiv

Our Lady Pecherska and Sophia of Kyiv

Continuing the theme of the “Mohyla Renaissance” in Sophia of Kyiv, let us turn to another theme unfolded in the Annunciation Chapel of the Cathedral.

Petro Mohyla’s brilliant ecclesiastical career began in 1827, when he became the archimandrite of the ancient and majestic Kyiv-Pechersk Lavra. At that time, the Lavra was the real “mother” of monasteries and a stronghold of monasticism in Ukraine and throughout Eastern Europe.

The first half of the 17th century marked the emergence of new theological topics in Ukraine, development and renewal of traditional theology. One of such directions was the cult of the Mother of God, activated by the penetration and spread of the Western rite in the Ukrainian lands. Petro Mohyla, who had close ties with the Catholic world, got to the Kyiv-Pechersk Lavra and got acquainted with the history and traditions of this spiritual center, realized that there is a good foundation for the development of the Marian theme. Remaining on the strong and inviolable foundations of Orthodoxy, he understands that the traditional for Kyiv theme of the Virgin Mary, approved in the city’s oldest shrine – Sophia of Kyiv, the image of Orans, can be confirmed by the ancient cult of honoring the Mother of God in this monastery. Petro Mohyla especially honors the miraculous image of Our Lady of Pechersk. He collected all the information about miracles and healings near her image and near the relics of the cave saints and fixed them in a book, which was later published by Athanasius Kalnofoisky entitled “Teraturgima or miracles performed in the Pechersk monastery and both its caves.” The title page of his Catechism adorned the image of Our Lady Pecherska (of the Caves).

The appeal to the image of the Mother of God has deep Kyiv traditions that originated in Byzantium. Just as Constantinople was betrayed by Constantine under the care of the Mother of God, so Kyiv and the Kyiv-Pechersk Lavra existed under her protection. It was believed that some lands were under her special care – such as Mount Athos, Georgia, Kyiv. In confirmation of the special protection of Kyiv land, a miraculous Pechersk icon of the Mother of God preserved in Lavra to the 13th century; according to the church tradition, it was written by Alypius of Pechersk in the 11th century. She represented the Mother of God sitting on the throne, holding the Infant Jesus on her knees (such iconography is defined as “All-Merciful”). The reverend Fathers Anthony and Theodosius with unfolded scrolls with writings are on either side of her. In Theodosius text are the words “Lord God Almighty, Creator of all visible and invisible creatures, by Your gaze build the house of Your Immaculate Mother by me, Your servant Theodosius, establish it immovably until the day of Your Last Judgment for praise and praise to You.” Anthony’s scroll contains the following: “I beg you, children, to abstain and not be lazy. Having in this Lord the Helper.”

The further history of this icon is as follows. Prince Roman Mikhailovych of Chernihiv, being in Bryansk, went blind. But, hearing about the miracles of healing that take place near the icon of Our Lady Pecherska, he ordered to bring this icon to Bryansk for his healing. The icon was taken along the Sven River, spent the night on its bank, and in the morning the icon was not found in the boat. She, strangely, came across a tall oak on the river. After such a miracle, the prince came on foot to the tree and, praying fervently, vowed to build a monastery on this site, annexing all the surrounding lands. Seeing through, the prince kept his word, a monastery was founded on this place, where the icon was kept. Later, traditionally, this image came to Russia and is stored in the Tretyakov Gallery. In the Kyiv-Pechersk Lavra, in the Far Caves, near the relics of St. Theodosius, there is a list of the 17th century from a miraculous image.

Arranging the Annunciation Altar of Sophia, decorating its walls and vaults with Marian plots of the Akathist cycle, the Metropolitan simply could not help but turn to the image of the Virgin. And, indeed, the mural depicts the image of Mary several times – two images of the Virgin are preserved in the altar – on the north pillar of the pre-altar niche and in the very apse conch – in the image of Orans. They are within reach of visitors. But the most revered image of the Mother of God Pecherska could be seen only at the altar. That is, the image was open only to the clergy, who performed sacred rituals.

The composition has been preserved in fragments, the left part of it was destroyed at a later time, during the unfolding of the pre-altar arch. But it is clear that we have a sample of a mural that transferred to the St. Sophia Cathedral the image of a revered Lavra shrine, bridging and consolidating the spiritual bridge between the two centers of holiness and spiritual support of Ukrainian Orthodoxy.

This icon was famous for the healing of the blind, the obsessed and, like Orans, intercession from enemies. 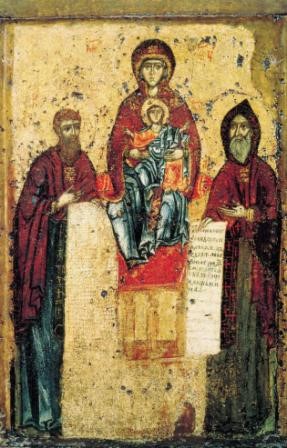 Icon of Our Lady Pecherska. XI century. Tretyakov Gallery of the Russian Federation 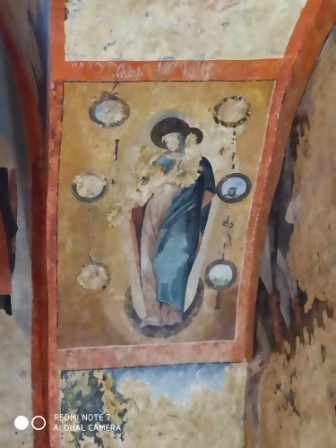 Our Lady with the baby. Sophia of Kyiv Annunciation altar. XVII century. 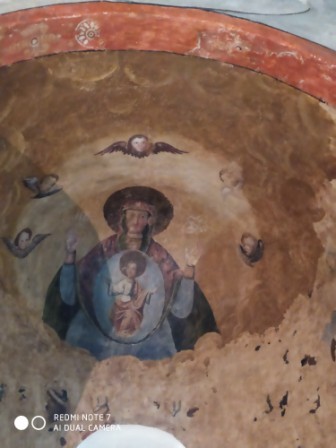 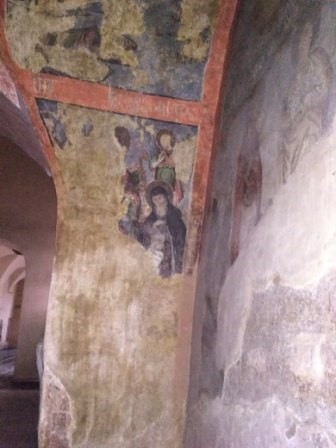 Our Lady Pecherska. Sophia of Kyiv. Annunciation altar of the XVII century. 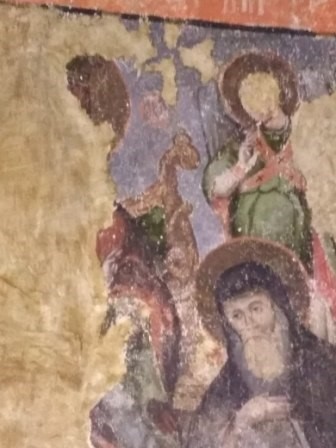