Home » Monuments reveal: from scientific works of employees » On April 7 we celebrate the Annunciation of the Blessed Virgin Mary - the Dedication day of the Golden Gate

It turns out that the Golden Gate of Kyiv, like all temples, had its own feast of the throne, which was never paid attention to. This is the great twelfth feast of the Annunciation of the Blessed Virgin, which reveals the history of Salvation and is the third most important feast after Easter and the Nativity of Christ. That is why the Gate Church is dedicated to the Annunciation, which crowns the monument and is its holy throne. According to the chronicle “The Tale of Bygone Years” (hereinafter TBY), there is a tradition to date the Golden Gate to 1037 and consider it a building of Yaroslav the Wise. The year 1037 is wrongly considered to be the oldest mention of the monument. In fact, the oldest information about the Golden Gate of Kyiv is contained in the contemporary of PVL Polish chronicle of Gallus Anonymous (early 12th century) under the year 1018. In accordance with the TBY and German chronicle of Thietmar of Merseburg (1018), it tells about the war for power of Yaroslav of Novgorod with his brother Sviatopolk of Kyiv, who was supported by his father-in-law – Polish Prince Boleslaw I the Brave. On August 14, 1018, they took Kyiv, but did not take the gates themselves, because the Kyivans, who saw in Yaroslav the usurper from the North, opened them to the victors and Boleslav struck the Golden Gate with his sword to capture the city. The sword was chipped from the blow, hence its name – “Scherbets”. This coronation sword of the Polish kings was kept in the first capital of Poland, Gniezno, and became one of the symbols of the Kingdom of Poland. Therefore, the earliest information of 1018 about the Golden Gate is quite reliable. Cutting (striking) the Golden Gate with the sword, which is found in chronicles and legends, in the Middle Ages meant not only the conquest of Kyiv – such a gesture was a sign of insult, sacrilege, because the Golden Gate was the sacred guarantor of the city inaccessibility.

The results of modern research show that the construction of the Kyiv fortifications was started with the Golden Gate and almost carried out by Volodymyr the Great, whose work was completed by his son Yaroslav. Like St. Sophia Cathedral, the fortifications with the Golden Gate and the Gate Church appeared at the end of Volodymyr’s reign – at the beginning of Yaroslav’s reign in 1011-1022. These were the sacred years of Κύριο Πάσχα (the “Lord’s Easter”), when, as on the day of Christ’s Resurrection, the Annunciation and Easter coincided mystically, which is very rare thing. If we analyze the chronicle of 1037, which first speaks of the construction of a “big city” (i.e.  fortifications) with the Golden Gate and Sophia, and only then – the Church of the Annunciation, we can conclude that for some time the main gate of the new Kyiv fortress functioned without a gate church. Apparently, it was short-lived, only a few years. No wonder the contemporary of the Golden Gate, Metropolitan Hilarion of Kyiv, in his “Word of Law and Grace” calls the gate not Golden, but Great, since the later name (Golden) probably appeared after the construction of the gate with a gilded dome. If Volodymyr built the Golden Gate, Yaroslav built the Church of the Annunciation on it, consecrated at the Lord’s Easter in 1022. On this day, Hilarion declaimed his “Word” in front of the Kyiv elite in the Church of the Annunciation, composed of two texts read on the coincided Annunciation and Easter.

The Golden Gate of Kyiv, as well as the main gate of the same name in Jerusalem, Constantinople, Trier, Spalato (Split), and a little later – Volodymyr-na-Kliazmi, were perceived as the “gate of Salvation”. They were a battle tower with a passage, which was crowned by the Church of the Annunciation. In the literature it is widely believed that the gate temples are the buildings inherent exclusively in ancient Rus architecture. The historian of architecture Yu. Aseev believed that the construction of gate churches was not typical for Byzantine architecture, it is not typical for Europe at that time. In fact, there are many examples of church gates in Byzantium, Mount Athos and Europe. The type of building itself, which combines a gate and a temple, is probably adopted from Byzantium.

According to biblical tradition, the Golden Gate is the one through which Christ entered the Eternal City (Jerusalem), it is considered to be the Gate of the Lord. This is the honor of the Mother of God, to whom the church above the Golden Gate of Kyiv is dedicated. Through it, that is, “through the Virgin”, they entered the city. When the rays of sun reached the passage, people believed that Christ the Savior, the Sun of Truth, entered the city through the Golden Gate, symbolizing the eternal triumph of Christianity. From the Golden Gate to St. Sophia was the path of triumph, which was the main street of Kyiv. The triumphant winners and honored guests were greeted by Kyivans at the Golden Gate in a procession, carrying icons and banners and singing church hymns. The procession headed to St. Sophia Cathedral, where it was greeted by the Metropolitan of Kyiv with relics of saints and church relics. The processions ended with the entrance to the main metropolitan cathedral “as in Upper Jerusalem”. A solemn service was held in the cathedral, consecrated with grand mosaic images of Christ Almighty and the Mother of God Orans – the Unbreakable Wall. So in the second decade of the 11th century the sacred core of Kyiv as the New Jerusalem was born. The golden gates of Constantinople and other cities, including Kyiv, as the most sacred, originating from the Jerusalem prototype, had a special city-protective meaning. That is why in Constantinople and Kyiv they were placed on the side of the field, where danger always lurked, and that is why the enemies tried in every way to take the city through the Golden Gate to deprive it of the supreme protection of the Mother of God. The main gate in Kyiv is called the Golden Gate, undoubtedly by analogy with the main city gate of Constantinople. The toponymy of the buildings, given by the chronicler in the article of 1037 (St. Sophia Cathedral, the monasteries of St. Heorhii and St. Iryna, the Golden Gate), inherits Constantinople. The analogy can be traced not only in the names of temples and gates, but also in the ideas of urban planning and planning structure of the “city of Yaroslav”. Volodymyr and Yaroslav sought to build not just a city, but the capital of the Christian state, similar to Constantinople – the New Jerusalem. The city was conceived as an integral architectural ensemble, one harmonious whole, closed by a ring of fortifications. The architecture of Kyiv of that period creates the image of a single sacred space, in the center of which in the Church of St. Sophia there is the Mother Orans – a personification of the ideal Church and the first inhabitant of Heavenly Jerusalem, who introduces the Rus neophytes in the city. Both the image of the Mother of God Orans in St. Sophia Cathedral and the Golden Gate with the church, which also represented the Mother of God, as well as the first Kyiv Church of the Mother of God Tithe of the 10th century, testified to the perception of the Byzantine idea of ​​the Mother of God as patron saint. Monuments of ancient Russian literature also point to the symbolic significance of the church at the Golden Gate. In the final part of the “Words of Law and Grace”, glorifying Yaroslav the Wise, Metropolitan “Ruthenian” Hilarion, addressing Volodymyr, says that Yaroslav completed the construction of fortifications and the Church of the Annunciation: “And your glorious city crowned with majesty as a crown. He gave his people and the city of the holy, glorious, quick to help Christians, the Holy Mother of God. He also built a church for her at the Great Gate in the name of the first Lord’s feast of the Holy Annunciation.” The greeting of the angel to the Virgin Mary Hilarion redirects to the city: “Rejoice, believer, city, the Lord is with thee!” These words mean the Incarnation of Christ through the Mother of God, His coming to Kyiv.

In ancient times, inheriting the Byzantine tradition, sacred images were placed on the gates. There is no doubt that a fresco or, rather, a mosaic image of the Mother of God was placed on the facade of the Golden Gate. It is mentioned in the chronicle, telling about the military actions of 1151. Grand Duke Iziaslav Mstyslavych, together with his allies – Princes Viacheslav Volodymyrovych and Rostislav Mstyslavych – negotiated with Ambassador of Yurii Dolhorukyi at the Golden Gate. During the negotiations, Viacheslav, looking back at the Holy Mother of God, who was above the Golden Gate, said: “And let her judge us, Most Holy Mother of God, with Her Son and our God, in this age and in the future.” Probably, the Golden Gate contained an image of the Mother of God with the Infant (Odyhitriia). In May 2016, a mosaic panel “Virgin of Nikopei” was installed on the facade of the Golden Gate by the National Conservation Area “St. Sophia of Kyiv”, supported by the state and church authorities and the general public, and this event received a great resonance in society. The author of the panel is the Honored Artist of Ukraine L. Totskyi, the scientific consultant is Doctor of Historical Sciences N. Nikitenko. Mary holds the Infant Christ in front of her like a shield. The icon of the “Virgin of Nicopei” (Victorious) was considered miraculous, one that protects the people and statehood. Thus, the installation of this icon at the Golden Gate of Kyiv has a deep symbolic meaning for us. 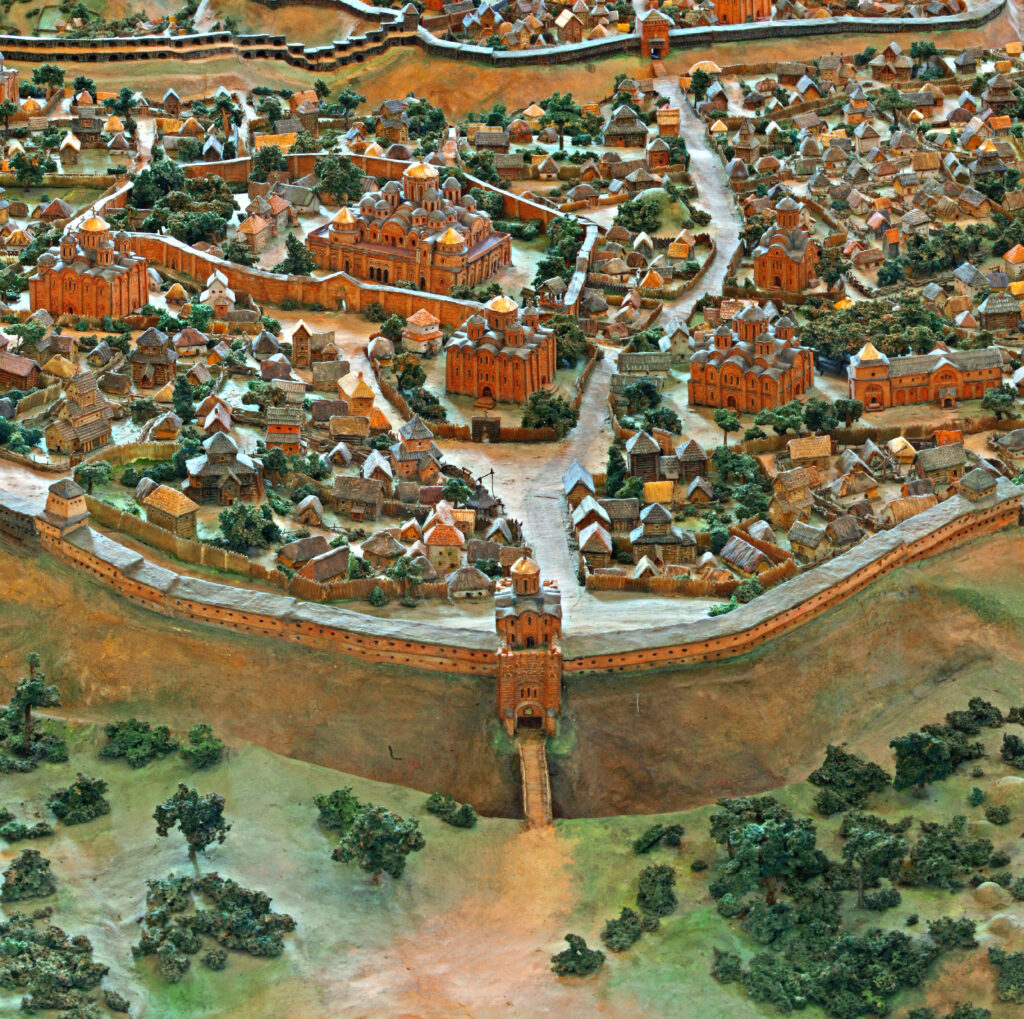 Golden Gate on the model of Kyiv of the 10th-13th centuries. Author Dinora Maziukevych. 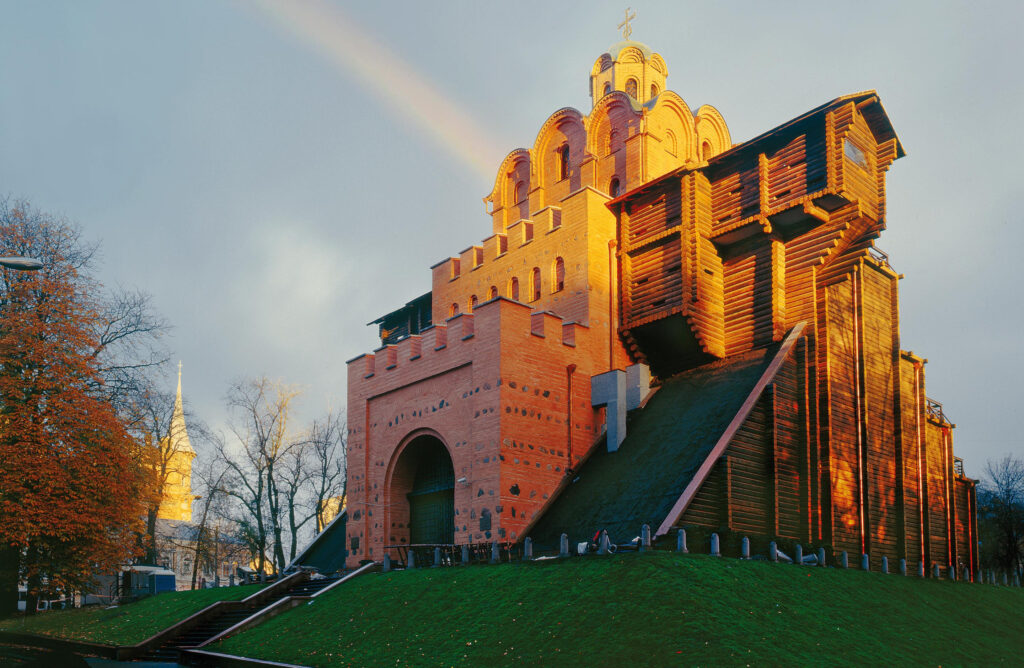 Golden gate on the floor side. Pavilion-reconstruction. 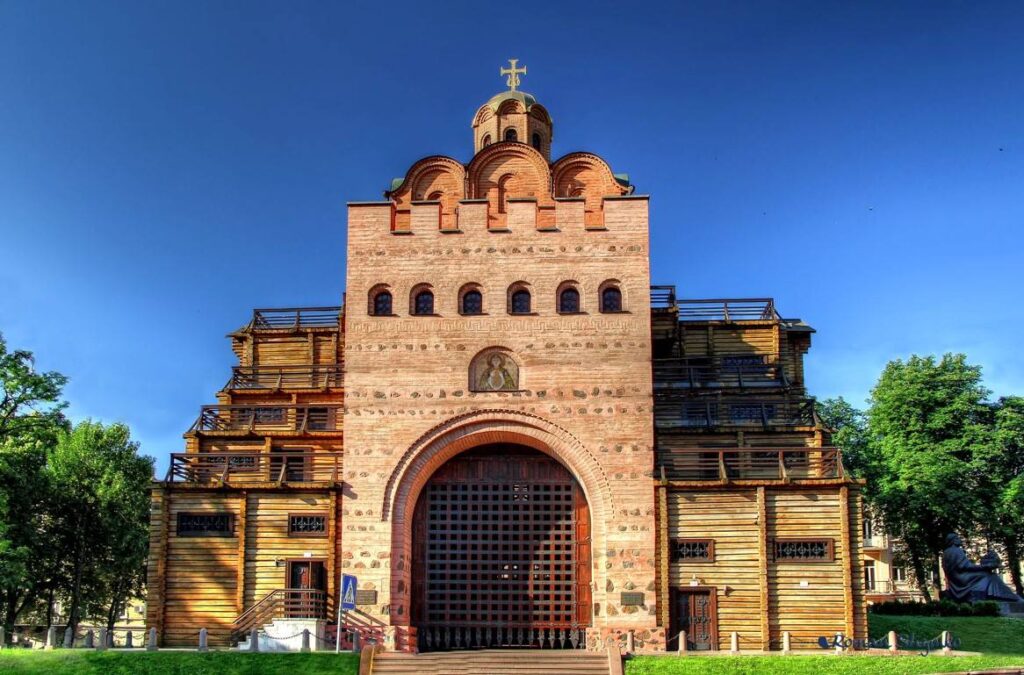 Golden Gate from the city side. Pavilion-reconstruction. 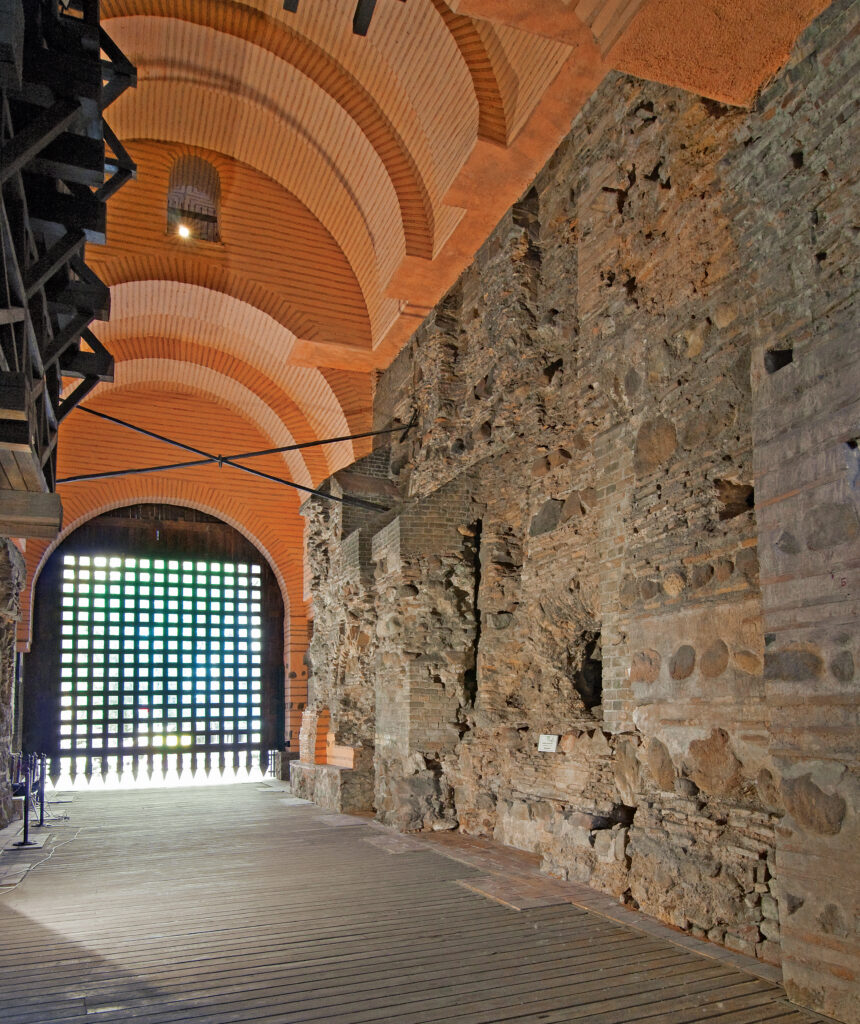 Ancient masonry in the passage of the Golden Gate. 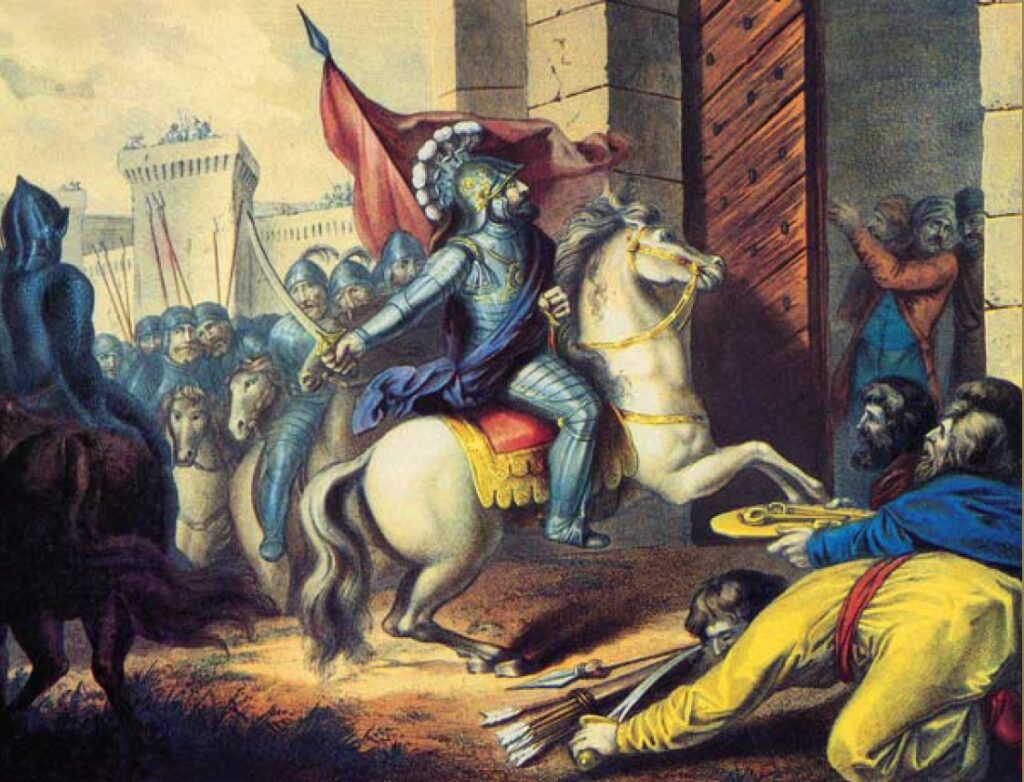 Boleslav the Brave strikes the Golden Gate with his sword. From a painting by F. Smuglevych. 1787 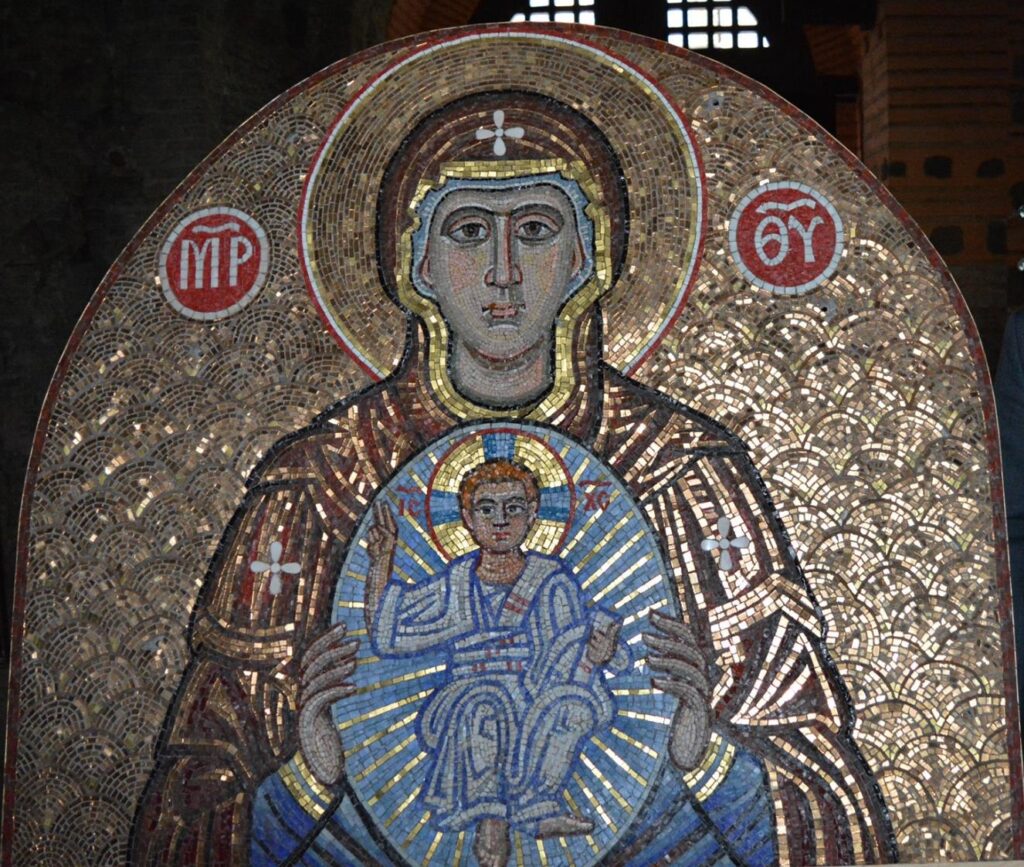