Visiting the restored pearl of the Conservation Area “St. Sophia of Kyiv” – Metropolitan’s House, numerous visitors are pleased to see the ancient interiors and surroundings of the Metropolitan’s Residence and become acquainted with the life of the Kyiv exarchs. However, having entered one of the rooms on the ground floor with preserved unique murals of the XVIII century, few people pay attention to one of the compositions-icons on the south wall. It is worth mentioning that these paintings were unexpectedly opened by Sophia restorers during the restoration works of 2005-2008, and it was they who indicated the purpose of this premises. The choice of plots and their location indicated the placement here of the Metropolitan House Church – the founder of this building, Varlaam Vanatovych. Why this church was not mentioned in the official sources that came to us is a separate story. But the icon, which was a part of the iconostasis, attracts special attention. By location – to the right of the Savior icon – it is the Temple Icon of the House Church. It gave the key to understanding the iconographic program of the church painting and its dedication. The icon represents two figures on the backdrop of a picturesque landscape. In the lower right corner on the background there is a small figure of Christ standing on the earth with his right hand raised upwards, his fingers folded in a blessing gesture. This hand is directed to the majestic figure of Christ in the foreground, who is energetically lifted upward, holding a bannerol in his hands (part of the image lost). There are halos above the heads of both figures. The story presented here, attributed as the “Resurrection of Christ,” is rare for the Orthodox tradition, but it is dominant in the late Middle Ages in Western art, which was imitated by the Renaissance. According to this iconographic rule, Christ is standing firmly on the earth and holding the Resurrection Holy Banner with the Red Cross, a sign of victory over death and the devil, or hovering over a revealed sarcophagus in a clouded glow with a banner in his hand. But in such coverage of the event its “grounding” and the loss of the incomprehensibility of the Sacrament were seen.

Returning to the story of the Metropolitan’s Residence in Sophia of Kyiv, it can be considered as an original model of church painting, in which the artist embodied the theological idea of ​​the pious Resurrection of Christ, tactfully passing the contradictory details for theologians and “tearing it away” from traditional attributes of terrestrial being. We do not see here any other actors usual for this plot, nor any funeral attributes. The main event – the Resurrection – is conveyed in an allegorical form. Christ is in two hypostases before us – earthly and heavenly, but they are inseparable. We are reminded of the inseparability of the Son of God with the human race and the care of this “little flock” to which the Heavenly Father commanded the Kingdom of Heaven.

The author is Irina Vilchynska 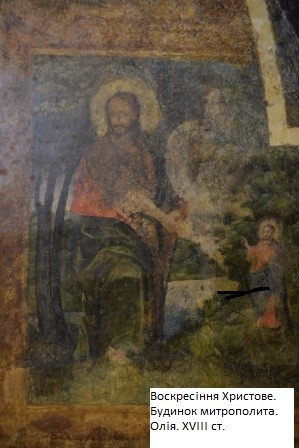 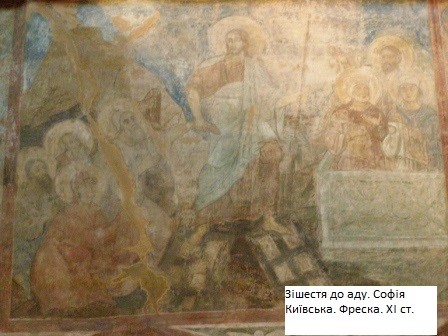 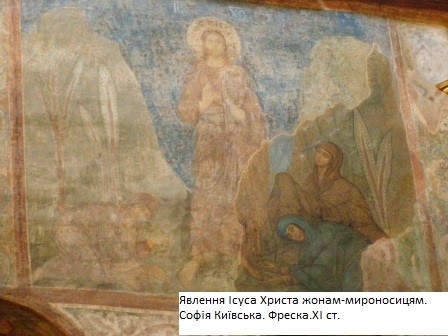 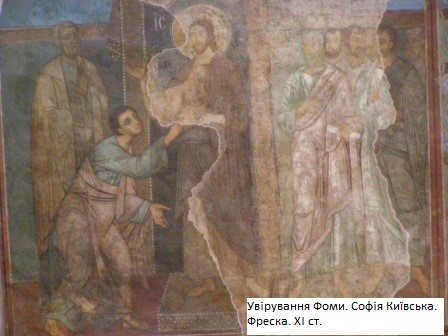