Little-known portraits of Kyiv princes in Sophia of Kyiv

Little-known portraits of Kyiv princes in Sophia of Kyiv

After the triumphant greatness of Sophia in the princely times of Volodymyr and Yaroslav, comes the time of devastation and decline in the history of the greatest church in Kyiv. The new rise of the Christian shrine took place during the time of Metropolitan Petro Mohyla, one of the most prominent and influential figures in Kyiv’s church history. Having placed the Kyiv metropolitan chair, which was in fact destroyed at the time, in a country raging and divided by interfaith strife, he had to find the support, the connecting cement, that would unite and strengthen the community. Petro Mohyla was brought up in a deep Orthodox tradition and had close ties to the Catholic world, he had a remarkable diplomatic flair. But he realized that to unite society on a spiritual level is possible only on the basis of the awakening of historical memory and return to the spiritual origins of Christianity – the Byzantine tradition. Petro Mohyla directed the ideological orientation of his activity to the revival of Orthodoxy and the rise of the glory of Kyiv in the princely era, together with the image of the Baptist of Russia – Volodymyr Sviatoslavych. Having become a metropolitan, Petro Mohyla embodies his own church-political program in St. Sophia Cathedral. Part of this program was the arrangement of a chapel in the western outer gallery of the cathedral, where he planned to install a shrine with a part of the relics of Volodymyr, found by him near the Church of the Tithes. The chapel itself was decorated accordingly – the mural program consisted of the plots of the Akathist cycle. The plots are extremely interesting, they reveal not only the general conceptual idea of ​​Petro Mohyla, but also reveal the personal preferences of the metropolitan. Let’s focus on one of them – the composition “Light-bearing Candle”.

The “Light-bearing candle” is one of the brightest examples of the transfer of the artistic metaphorical form of ikos 11 into the figurative form. In it, the Virgin appears in the image of a light-bearing candle, which, like a ray of sunshine, dispels the darkness of night and shows the faithful the path of mind and soul. The composition, which is presented in the Annunciation Chapel, is extremely interesting not only for its theological interpretation, but also for those characters which appear next to the Virgin. The Virgin herself is a touching and expressive image. Her slender figure, resembling a candle itself, wrapped in a green cloak with a red heel, raised on a high pedestal… At its foot, the remnants of darkness swirl, which is dispersed by the light of a candle in her right hand. And she extends her left hand to the crowd of people, as if addressing them and blessing them at the same time. To her left is a group of secular figures, led by well-written images of the rulers. Given the bright, elegant clothes, crowns on their heads – these are statesmen, community leaders. In addition, they have clearly defined portrait features.

First man we see is a kneeling man folding his arms in front of him in a prayerful posture. He is dressed in rich red clothes, covered with gold, in a gold coat. His clothes resemble a royal mantle. On his head – a gold crown decorated with gems. Precious pendants go down to his shoulders on both sides. The face is elongated, with a straight elongated nose and large expressive eyes. He has long curly half-gray hair, the same, curly forked beard and dark blond mustache. This middle-aged man in royal robes clearly stands out from the crowd. If we turn to the history of the iconography of the co-apostolic Volodymyr the Baptist, we can be sure that this image corresponds to the basic rules of reflection of this historical figure.

On both sides of Volodymyr we see two male heads – also in royal crowns, with expressive facial features. On the left – a middle-aged man with an elongated face, dark blond hair, a sharp beard. He has a straight long nose, sharp, small eyes, an ascetic face. The man looking to Volodymyr’s right has a round, beardless young face, large expressive eyes, with which he looks inquisitively in front of him.

We can assume that these are Volodymyr ‘s sons – Borys and Glib. Icons with images of Volodymyr, Borys and Glib are known from the end of the 14th century. The distinctive iconographic features of these images are the age difference, which is emphasized by the means available to artists. It is known that the older brother, Borys, was already a mature man, unlike the young man, almost a child, Glib. So, Boris on icons usually has a courageous face, elongated with a pointed chin. The sharp beard and mustache have not yet been touched by gray, but he is a courageous and experienced warrior. Glib has a round, beardless youthful face. The nose is shorter, the facial features are softer, almost girlish. And this is clearly seen in the Sophia composition. Headdresses, which traditionally depict brothers (princely pointed hats trimmed with fur) have been replaced here with crowns, which hints at the right of succession of their father’s, “royal” table.

A little farther, behind Volodymyr, retreating half a step, stands a gray-haired man with a thick long beard, long gray straight hair. Hands crossed on his chest, as before taking communion. The clothes on it are no less rich than on the predecessor. The royal mantle plays a golden glow. Probably, this is how they imagined Volodymyr’s successor, Yaroslav. He is represented here by an old man. And, indeed, if Volodymyr died before the age of 60, then Yaroslav died a deep 75-year-old man.

So, we assume that we have a rare example of portrait painting of the 17th century, even more interesting because among the characters depicted in the icon, you can see not only historical figures canonized at the time (Volodymyr, Borys, Glib), but also Yaroslav The wise who has not yet been canonized. We can assume that this composition was a donator’s one. Unfortunately, the face of the leader of the group of clergymen approaching the Virgin on the right has not survived. But, given the remnants of the image of the characteristic attire, we can assume that Petro Mohyla was depicted here as the founder, guardian of the shrine and the successor of the great princes of Kyiv. And, considering the particularly respectful attitude of Petro Mohyla to the image of the Mother of God, known since the time of his stay as Archimandrite of the Kyiv-Pechersk Lavra, it becomes clear why the image of the Virgin is addressed by the founder. 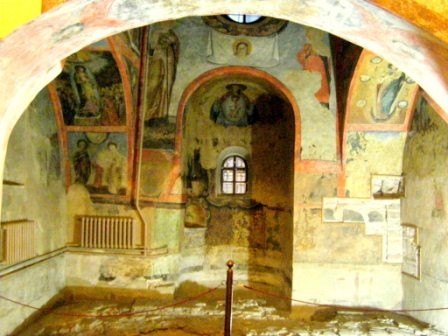 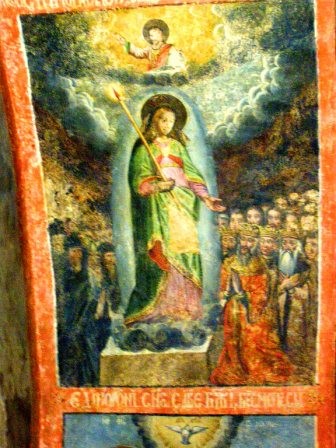 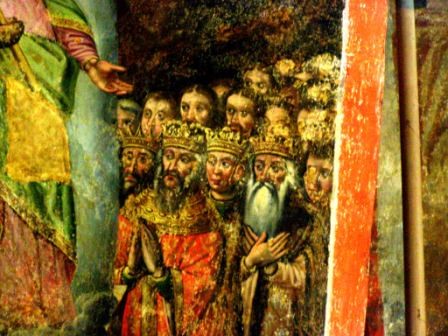