The Swedish princess Ingegerd (in baptism Iryna) was a wife of Yaroslaw the Wise. A jewelry that could have belonged to her was found in Sweden in 1995.

In a hot July day an archaeology student made a remarkable discovery at an excavation in Sigtuna; a gold finger ring with a distinctive ”angular” appearance, bearing several ridges decorated with dots. The ring lay there in the soil, totally uncorroded, apparently brand new, so that it took some time to convince its finder that this was not a hoax but truly a gold ring from the Viking period.

The site where the ring came to light was the Early Mediaeval churchyard in the St. Gertrude quarter, viz. Sigtuna Museum’s own demesne.

The ring was lying in the fill between some of the graves, 90 cm. below the present ground surface. The archaeologists believe that it may have been carried up from a lower layer in connection with the digging of a grave, for the churchyard is located on the site of a building from the Viking era. The purpose of the excavation was to determine the nature of the building, the theory being that this was the site of the royal manor of Erik Segersäll and Olof Skötkonung, founded c. 980.

It is only an assumption that the ring belonged to Princess Ingegerd, by reason of its size – it was intended for a girl or a woman with a slender finger – and the fact that Ingegerd probably grew up in Sigtuna; almost certainly at the place where the ring was found. 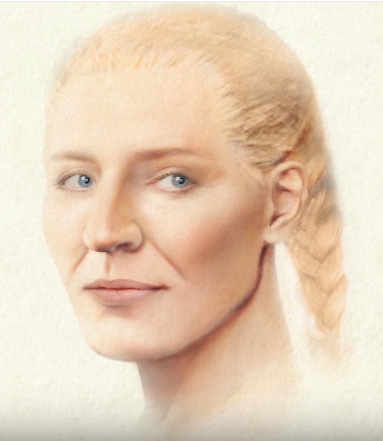