Honoring the Athos icon of Our Lady of Vatopedi

Home » news » Honoring the Athos icon of Our Lady of Vatopedi

Honoring the Athos icon of Our Lady of Vatopedi

February 3 is a day of honoring of the Athos icon of Our Lady of Vatopedi, called Delight and Consolation.

In front of the icon they pray for the gift of peace of mind in sorrow and grief, pray for healing from serious illnesses.

The list from this image was a family icon of the Tuptalo family: Sava Tuptalo – a centurion of the Zaporizhian army, founder of the St. Cyril’s Monastery, his wife the pious Maria Mykhailivna, his three daughters, who were alternately abbots of the Jordanian Monastery in Podil, Kyiv and the only son of Sava Hryhorovych Danyil Tuptalo, the future saint Dymytrii of Rostov, writer, brilliant preacher and, finally, the famous author of the Lives of the Saints.

At one time, the father gave the family icon to his son Danyil (in in monasticism Dymytrii) and this family heirloom accompanied the monk Demetrii, later abbot of many monasteries in Ukraine, and at the end of the life of the abbot of St. Yakiv Monastery in Rostov Veliky and gave him the strength to complete his great work on writing the Lives of the Saints, as well as reminded of his family and his beloved Ukraine. When Dymytrii felt that his life was coming to an end, he sent this icon to Kyiv to the St. Cyril’s Monastery with a request to install it over his parents’ grave. The whole family of the saint, except him, is buried in the narthex of the St. Cyril’s Church in Kyiv.

The icon of “Delight and Consolation” is located in the monastery of Vatopedi on Mount Athos. It is worth noting that once this image was part of a mural, which was later removed from the wall and placed in a kiot. For many years, the icon has been covered with a silver setting, only the faces of the Mother of God and the Infant are open. The image itself has been repeatedly renewed, but the expression of the eyes of the Virgin, despite the renewal, remains invariably insightful, which introduces awe. The legend of the Vatopedi monastery says that once robbers wanted to attack the monastery. They hid under the monastery walls and planned with the first ray of sunshine, as soon as the gates opened, to break into the monastery, loot all its treasures and kill the monks. At the end of the morning prayer, all the brothers parted and only the abbot remained in the church. Suddenly he heard the voice of the Mother of God echoing from Her icon: “Do not open the gates of the monastery today, instead climb the walls and drive away the robbers.” However, looking at the icon, he saw Jesus raise His hand, closing the mouth of the Mother of God and saying to Her: “Do not worry about this sinful flock, leave them. They will die at the hands of robbers, because the lawlessness in this monastery has increased.” However, the Mother of God slightly turned away the Son’s hand to free Her mouth and repeated this warning twice more. When the abbot climbed the walls of the monastery, he saw that he was surrounded by robbers and ordered not to open the gate. With the help of guns, the brothers drove away the enemies, so the monastery was saved. When the monks returned to the temple, they saw that the image had changed its appearance, in which it is still.

It is worth noting that the icon was originally written on the type of “Hodegetria” (“Pointing the Way”), where the Virgin points to Christ, which is “Way, Truth and Life”. (John 14: 6). Thanks to this act, we see that the Mother of God showed her mercy by saving the monks, because for her mercy is much more important than justice, and the Lord God does not punish, but guides people to the true path. 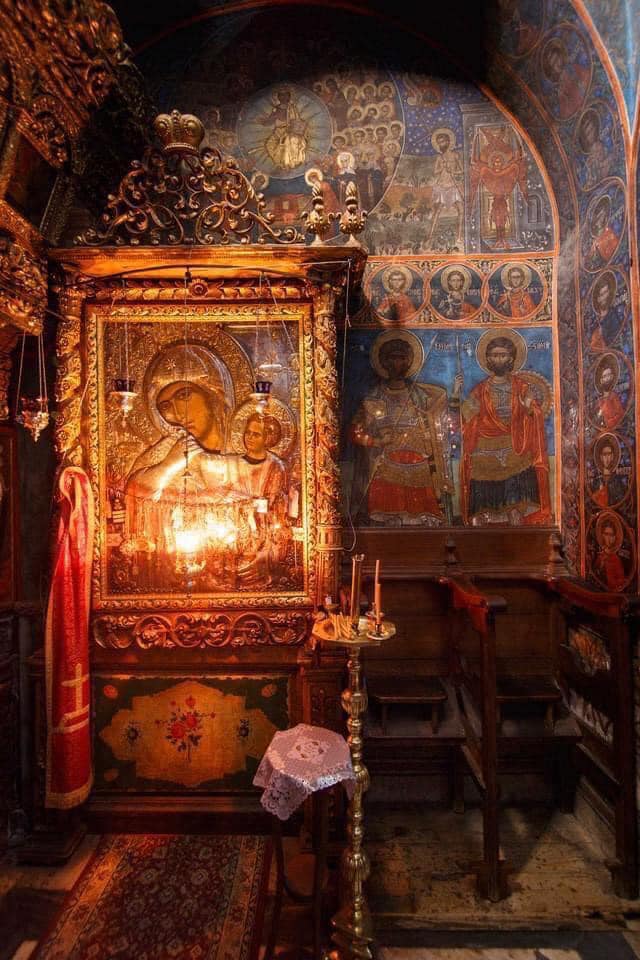