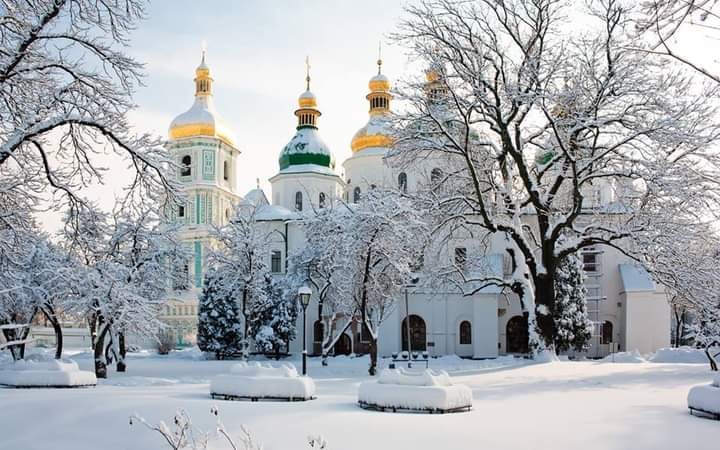 “Roman starts a song of all winter: the year closes, winter begins, cunning patterns on the windows are painted, eyes are delighted with snow.” So once upon a time, winter came in a snow-covered coat. This year, December began with light rain, the first timid frost, and thin ice that barely covered the streets. But such trifles can be forgiven to him, because the month is rich on holidays, almost every day is a holiday!

On the 4th of December we celebrate the Presentation of the Blessed Virgin Mary. The holiday is dedicated to the event that Saints Joachim and Anna brought their three-year-old daughter Mary to the Jerusalem Temple to serve God. The Virgin Mary lived at the church until the age of 12 – until her engagement to the righteous Joseph. The holiday is one of the twelve main holidays of the annual cycle.

According to the folk custom, water was consecrated on this holiday: it was taken in a place where three waters converge, poured through a flame, and then used that water against diseases, sorcery and love spells. In the midnight, women sat naked on the doorstep and spun self-seeding hemp to “get the yarn in hand.”

St. Catherine the Great Martyr, the heavenly patroness of brides and marriage, is honored on December 7. Before the day of Catherine put a cherry twig in the water, as it blooms before Christmas, there will be a wedding soon.

December 13 is the day of remembrance of Andrew the First-Called, who is considered the founder of the Church of Christ in Ukraine. Already in the first half of the 11th century the first Ukrainian icons with his image were created.

On this day, the girls foretold the future husband: they let the chicken into the house at night – if it quietly began to bite the grain, the groom will be calm, if the chicken ran – will be formidable and quarrelsome.

On December 17, we honor Barbara the Great Martyr, a saint who has the gift of healing and saving people from sudden death. According to the life of St. Barbara, compiled by Metropolitan Ioasaf Krokovskyi, in the 18th century, there was a terrible plague in Kyiv, which did not affect St. Michael’s Monastery, where the relics of St. Barbara were located.

This day was also divination, but only by girls. They burned paper on a plate, and recognized the groom’s face by the outlines of flames or ashes.

St. Nicholas the Wonderworker is honored on December 19. “Nicholas is the one whose miracles spread throughout the earth, the one whom the whole earth and all who live on it glorify. St. Nicholas is glorified at sea, glorified on land, called in all dangers. When a terrible storm threatens and the sea roughs, then everyone calls St. Nicholas with tears; when misfortune befalls us, then St. Nicholas is our patron…” This is how the Italian philosopher Bonaventure, who lived in the 13th century, mentions the holy miracle worker.

All day before his holiday, St. Nicholas bakes fragrant sweet stars, which he puts in bags. And the next day, in a lush coat with helpers-angels, he delivers treats to polite children, also fulfilling many of their requests.

December 22 is the day of remembrance of St. Anna – the mother of the Holy Virgin. Anna and her husband Joachim could not conceive a child for a long time. And when they were completely desperate because they were elderly, an angel appeared to them and announced that they would soon become parents. All women who wanted children on the eve of the holiday consumed only bread and water. In the morning they went to church, confessed, partook of communion and prayed to the Holy Intercessor for future descendants.

As we can see, centuries-old Christian holidays and folk customs are intertwined in the Ukrainian traditions of celebrating major religious holidays.

Sophia of Kyiv invites you to celebrate together! In December, visitors to the Conservation Area will have exhibitions, tours and lectures, workshops and quests. Cozy and warm halls of the Metropolitan’s House, Backery, Zaborovskyi Gates are waiting for you!