St. Theodore Stratelates served as military commander of the eastern Roman city of Heraclea (Asia Minor). He was generously gifted and endowed with a special beauty. For wisdom and mercy, God enlightened him with the knowledge of Christian truth. The bravery of the holy warrior became famous after he killed a giant serpent that lived in an abyss near the city. St. Theodore spread the faith of Christ among the citizens of his city, for which after great suffering he was beheaded in 319.

In church literature and art he is compared with St. Theodore Tyron and sometimes impose their images on each other, which is not surprising: both came from the same area, were warriors who defeated the serpent, but had different titles: the word “Stratelates” translates as military commander, and “Tyron” means recruit. In medieval art, they were partly depicted and honored together, as they both embodied the Christian army and the military power of the state, were the patrons of its people, closely associated with St. the great martyr George the Victorious or the Serpent Fighter – each of them defeated his serpent.

All of them are depicted in the frescoes of Sophia of Kyiv – the church built by Volodymyr the Great and completed by his son Yaroslav the Wise. Built in 1011 – 1018 by the prince’s order and at the prince’s expense, St. Sophia became a majestic memorial to the triumph of Christianity in Rus-Ukraine. The special veneration of the holy soldiers in Sophia as princely patrons can be clearly seen in the frescoes of the ancient northern inner gallery (now the nave of the Volodymyr altar), which was the “porch of the holy soldiers” (as it is called in science). In this “gallery of warriors” the central frescoes of Saints Theodore Stratelates and Theodore Tyron appear next to each other on the south wall. The image of St. Theodore Stratelates is best preserved. Although the fresco is damaged, it impresses with its beauty and perfection. The unique millennial fresco clearly presents us with a portrait of a wise and brave prince. A slender face with a slightly slanted sideways pensive focused gaze and a head of curly hair, rich attire and armor demonstrate the aristocratic beauty, high spirituality and military steadfastness of the young ruler of Kyiv. Purple royal boots and a mantle attract attention, and this rank, as it is known from sources, was possessed by the son of Volodymyr and the Byzantine princess Anna Porfirogenita – Borys. Interestingly, very old graffiti with the princely trident of Borys Volodymyrovych and the inscription “Borys” are scratched next to this wall. It is possible that the beloved son of Volodymyr and his heir at the Kyiv throne – Prince Boris, who commanded his father’s army when St. Sophia was built, i.e. was Stratelates, is represented in this amazing fresco… 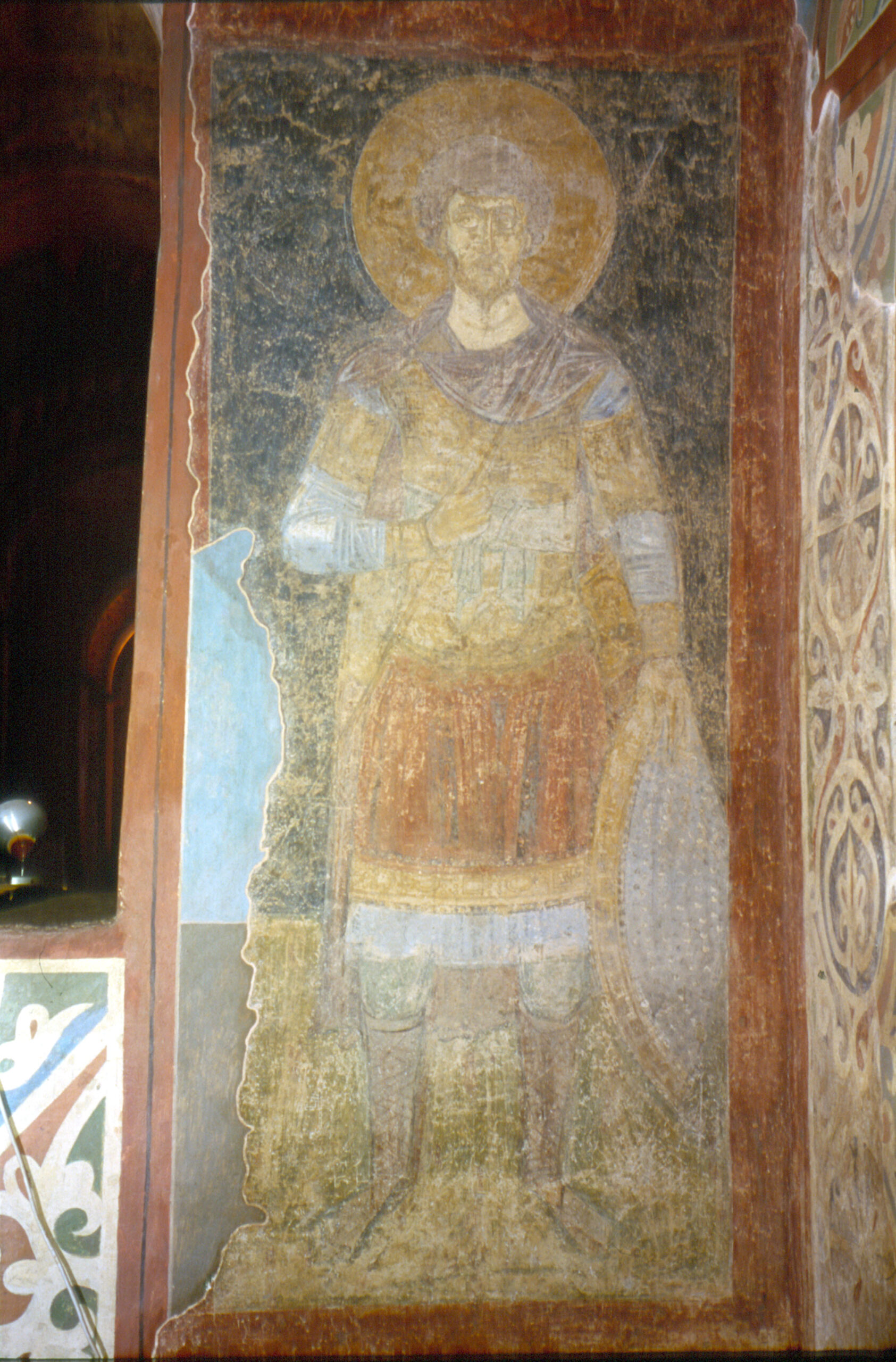