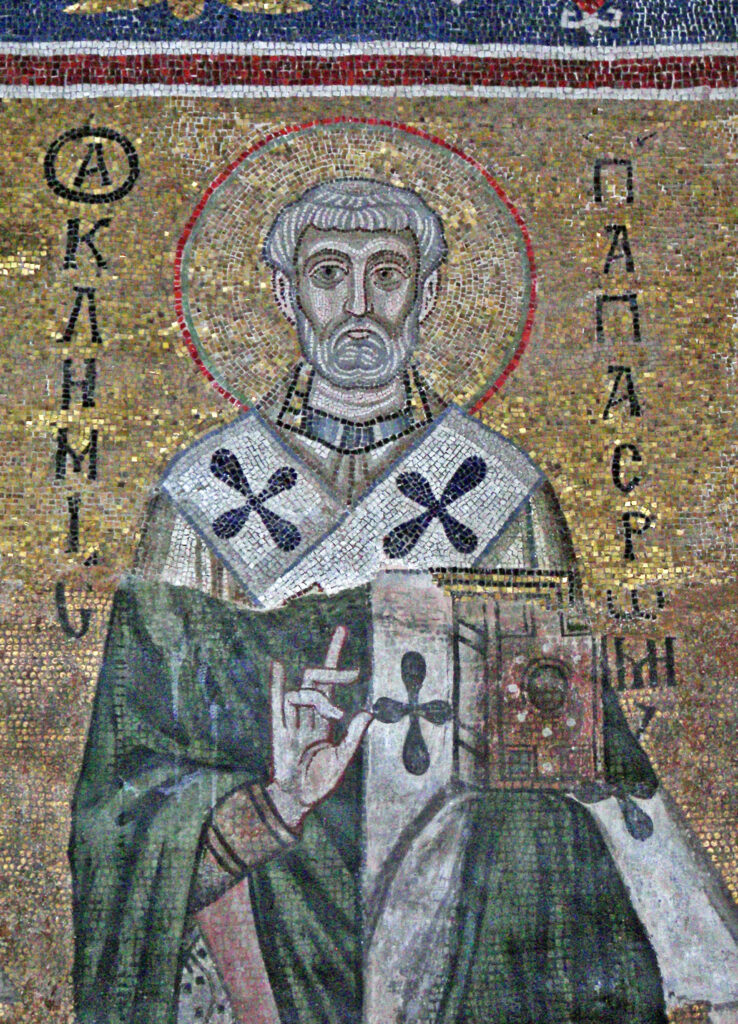 Hieromartyr Clement, Pope, died about 101, commemorated twice – November 25/December 8 (martyrdom) and January 30/February 12 (relics) is one of the “apostolic men” and the most revered of the early Christians. St. Clement was converted to Christianity by St. Apostle Peter and preached with St. Paul the Apostle, ordained by the Apostle Peter and became Bishop of Rome. He was called the second, third and fourth bishop of Rome after the Apostle Peter. We have received a number of works under the name of Clement, but only one of them is authentic – First Epistle to the Corinthians, the earliest evidence of Clement’s veneration as a martyr dates back to the end of the 4th century.

According to the church tradition, he was exiled under the emperor Trajan (98-117) at the turn of 1st – 2d centuries from Rome to Chersonesos Tavriiskyi for hard labor in stone masonry, where he preached Christianity and baptized people with great success, so he became the founder of the church organization of Chersonesos.  Clement was delated, and Trajan ordered to drown him with an anchor around his neck, so that Christians would not find and honor his remains.

In 861 Cyril (Constantine), a Slavic educator and philosopher who found himself in Byzantine Kherson (ancient Chersonesos and Korsun of Rus chronicles) on his missionary journey to Khazaria, on his own initiative, after a long search discovered the relics of Clement, the existence of which the townspeople no longer knew anything. The Thessalonian brothers Cyril and Methodius brought the relics of Clement to Great Moravia, and most of them were transferred to Rome. There, Pope Adrian II consecrated the Gospels and the Psalms on the church throne, translated by Cyril and Methodius from Greek into Slavic thanks to the Slavic alphabet they created. They are called the first teachers of the Slavs, because the writing they created became the basis of Slavic culture.

In Rus, the veneration of St. Clement has its own tradition. It is known from the chronicle that Volodymyr brought the relics of St. Clement from Korsun that he seized in 988/9 to Kyiv and laid them in the Tithe Church, where they consecrated the co-apostolic deed of Volodymyr and all the newly converted Rus, whose apostle was considered St. Clement of Rome. It is known from the chronicle that the head of St. Clement was worshiped in Kyiv, i.e. the main part of his relics, which was left by Cyril and Methodius in Korsun. For two and a half centuries, until the Mongol-Tatar invasion, the relics of St. Clement were one of the main shrines of Kyiv.

It is clear why the Kyivan cult of St. Clement of Rome was vividly reflected in Sophia of Kyiv. Well-known is the famous mosaic “Holy Order” in the main altar of the cathedral, which begins with the majestic images of Sts. Epiphany of Cyprus and Pope Clement. I am sure that these images emphasize the important actions of Prince Volodymyr Sviatoslavych as the Chrictianiser of Rus – the construction of the Tithe Church, consecrated on the day of St. Epiphanius of Cyprus (May 12) and the introduction of the cult of St. Clement of Rome as a nationwide, as he was considered patron of newly converted nations.

But it turns out that there is also a fresco image of St. Clement of the Pope, which was previously unknown. Recent research has revealed this image directly under the prince’s portrait in the central nave of the cathedral. Clement of Rome, very reminiscent of the Apostle Peter, is depicted in the fresco, as in the mosaic, with a short curly beard and a hat with short curly hair, with tonsure. By close analogy with the above-mentioned mosaic of Sophia, I identified the image of this saint as Clement of Rome and associated him with Volodymyr the Great, under whose image he appears in the prince’s portrait. This is not accidental, because Volodymyr was the initiator of the cult of St. Clement in Kyiv as a nationwide and actively implemented it.

This accentuation of the image of this saint is fully consistent with the ideological and decorative program of St. Sophia Cathedral, commissioned and built by Volodymyr the Great, and the finalist of his father’s work – Yaroslav the Wise. That is, the cathedral appeared at the end of Volodymyr’s reign – at the beginning of Yaroslav’s reign, in 1011 –  1018, which reliably confirms the earliest graffiti of Sophia with the dates of their writing on its frescoes –  1018, 1019, 1022, 1023, 1028, 1033 and 1036. Since the portrait illustrates the consecration of Sophia, which is a symbol of the Christianization of Rus, in this case it is emphasized that it took place on the holy relics of Clement of Rome – “The Apostle of Rus”. 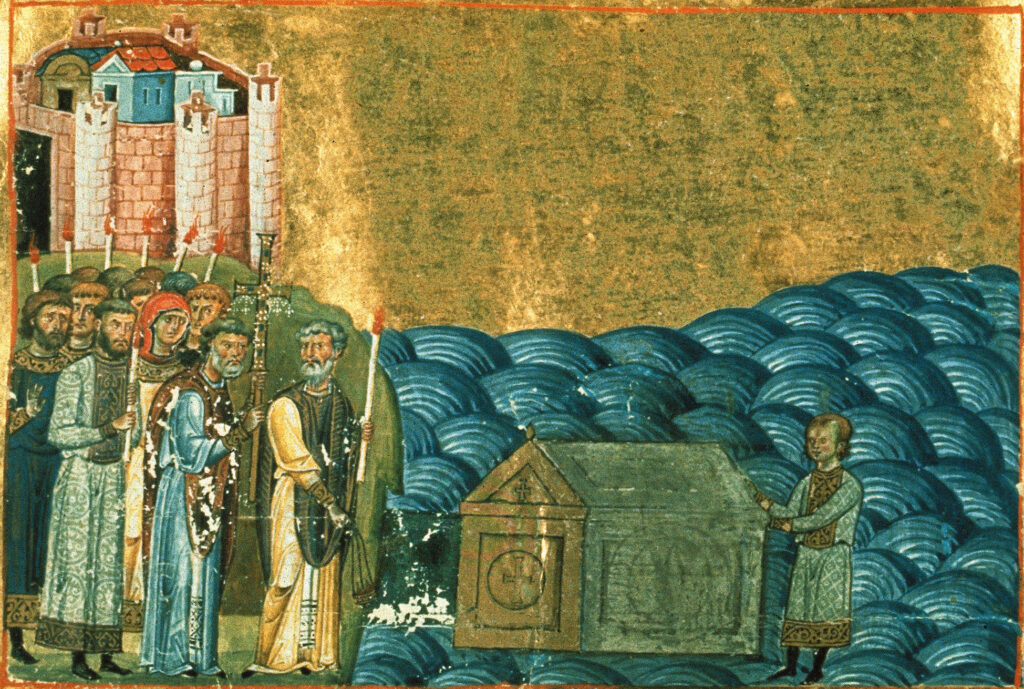 Acquisition of the relics of St. Clement of Rome. Miniature Menology of Basil II (985)