December 12, 2020 marks the 30th anniversary of the inclusion of the site “Kyiv: Saint-Sophia Cathedral and Related Monastic Buildings, Kyiv-Pechersk Lavra” in the UNESCO World Heritage List

December 12, 2020 marks the 30th anniversary of the inclusion of the site “Kyiv: Saint-Sophia Cathedral and Related Monastic Buildings, Kyiv-Pechersk Lavra” in the UNESCO World Heritage List

The initial nomination of the site was prepared only for the Saint Sophia Cathedral, which ICOMOS later recommended to supplement by including the Kyiv-Pechersk Lavra.

In 1989, under the leadership of the then director of the National Conservation Area “St. Sophia of Kyiv” Valentyna Nykyforivna Achkasova and deputy director for scientific work Irma Fantynivna Totska, a nomination dossier was prepared for the introduction of the St. Sophia Cathedral of the 11th century with the monastic buildings of the 18th century on its territory and the Kyiv-Pechersk Lavra to the UNESCO World Heritage List. 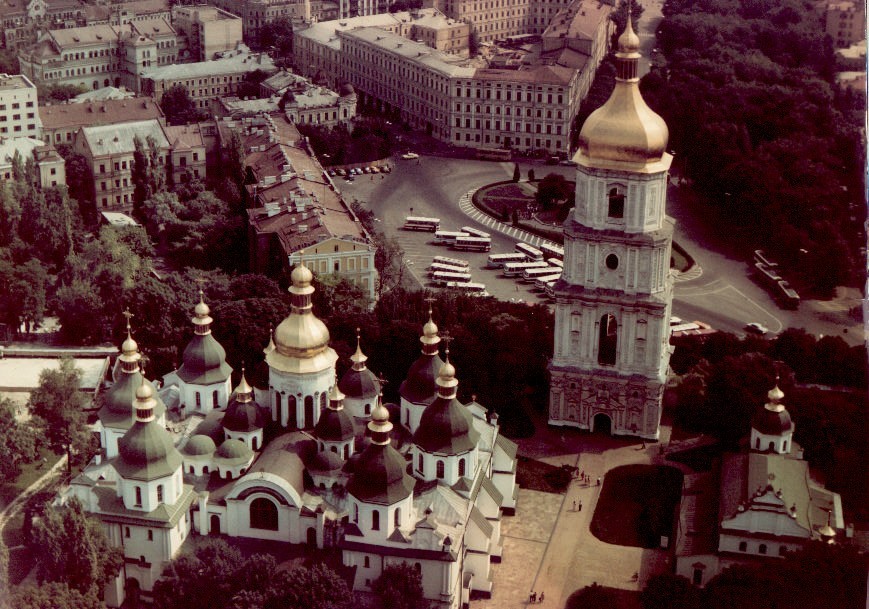 On December 12, 1990, during the 14th session of the World Heritage Committee in Banff (Alberta, Canada), an object called “Kyiv: Saint-Sophia Cathedral and Related Monastic Buildings, Kyiv-Pechersk Lavra” was added to the UNESCO World Heritage List at number 527. 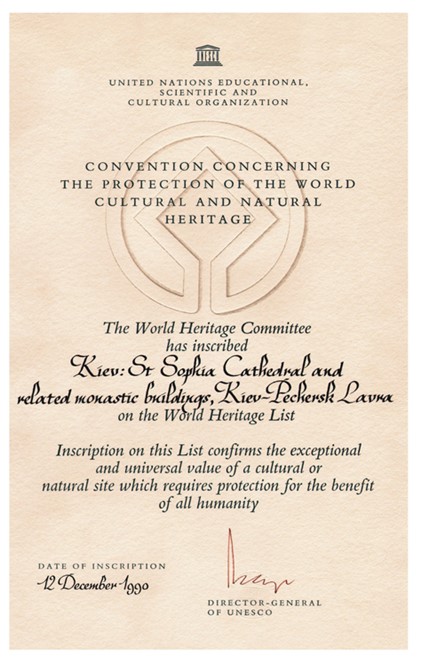 This object became the first Ukrainian object in the List. It consists of two territorially separate parts – the Cathedral of St. Sophia with related monastic buildings and the ensemble of the Kyiv-Pechersk Lavra with the Church of the Savior in Berestov. These largest national shrines are united by the time of their appearance and role in the spiritual and cultural life of the country.

The site is included in the World Heritage List according to the following criteria: (i) (ii) (iii) (iv).

Criterion (i): The cultural heritage site “Kyiv: Saint-Sophia Cathedral and Related Monastic Buildings, Kyiv-Pechersk Lavra” is a masterpiece of human creative genius both in its architectural composition and in its decorative adorn. 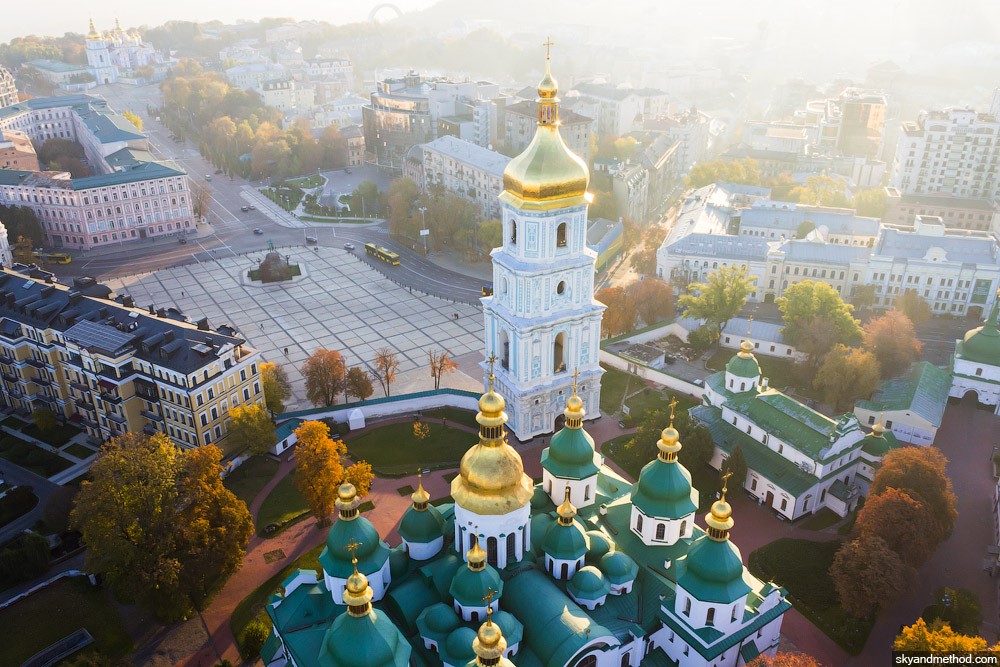 St. Sophia Cathedral is a unique monument of architecture and monumental art of the early 11th century, which has the world’s largest ensemble of mosaics and frescoes of that period. The architectural features of the cathedral include additional naves added to the five-nave core and a pyramidal three-dimensional composition of the cross-domed church. The monumental painting of the cathedral is the only ideological ensemble, which reflects the main theological ideas of this era and is an outstanding monument of Byzantine art. The huge pantheon of Christian saints depicted in the Cathedral has no similar in number among the Byzantine monuments of the time. The specificity of the cathedral’s frescoes is also a complex of unique secular frescoes of stair towers in the tradition of court Byzantine art.

The ensemble of the Kyiv-Pechersk Lavra is a masterpiece of Ukrainian art, which was finally formed during the Baroque era. It combines unique above-ground and underground buildings and structures of the 11th-19th centuries combined with a plastically expressive landscape.

Criterion (ii): The World Heritage Site is the result of the cultural interaction of Kyivan Rus, Byzantium and Western Europe. The architecture and monumental painting of the object reflect the Byzantine architectural and artistic traditions, which have acquired a new interpretation in it under the influence of the local order. This manifested itself in both spiritual imitation and architectural planning, including the tradition of the underground Orthodox cult architecture of the Kyiv-Pechersk Lavra. The Assumption Cathedral was an example for the construction of such temples in the Eastern European region during the 12th-15th centuries.

Criterion (iii): “Kyiv: Saint-Sophia Cathedral and Related Monastic Buildings, Kyiv-Pechersk Lavra” is an important evidence of the centuries-old cultural tradition of the Byzantine area in general and Kyivan Rus in particular. Over the centuries, the site has had a significant spiritual impact on Eastern Europe and beyond.

Criterion (iv): Saint-Sophia Cathedral is a unique building that reflects in its architecture and frescoes the specifics of the donor’s order. The construction of the cathedral marked the beginning of the architectural school, which influenced the cult architecture and monumental art of Kyivan Rus, and then Eastern Europe.

The Kyiv-Pechersk Lavra is a valuable architectural ensemble that was formed over almost nine centuries and now reflects changes in stylistic trends in architecture, as well as the process of improving engineering structures.

St. Sophia Cathedral of the Wisdom of God is the oldest Christian church that has been completely preserved in East Slavic lands. Born in the era of Christianization of Rus, it became the cradle of Kyivan Christianity, the main shrine of Rus-Ukraine, a symbol of the Ukrainian nation, statehood and culture, glory and state wisdom.

Built in 1011–1018 at the turn of the reign of Volodymyr the Great and his son Yaroslav the Wise, as the main Christian church in Rus, the cathedral became its spiritual, political and cultural center. Chronicles were kept at the cathedral and the first known library in Rus with a scriptorium was created, where books were translated and rewritten.

The name of the cathedral “Sophia” comes from the Greek word “Sophia”, which means “Wisdom”. Dedicated to the “wisdom of Christian teaching”, the cathedral, according to the creators, was to affirm Christianity in Rus. 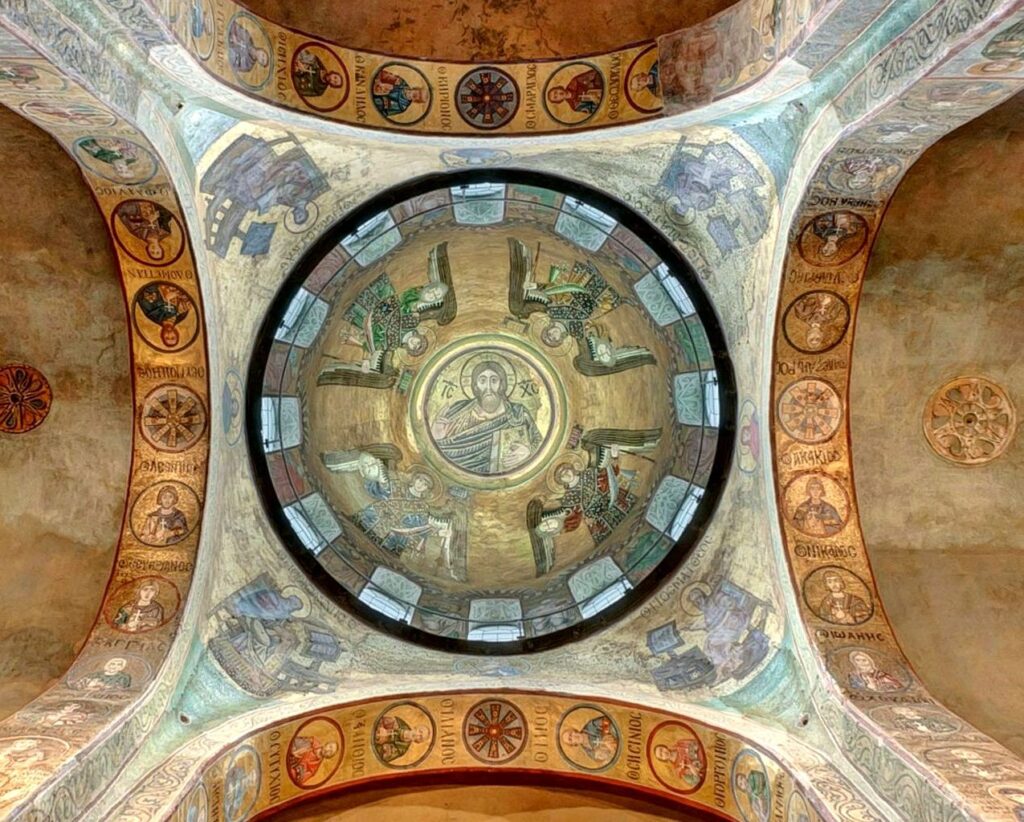 Saint-Sophia is one of the masterpieces of the sacred architectural heritage. Majestic architecture, unique mosaics and frescoes place it on a par with the most significant monuments of human civilization.

The shape of the cathedral corresponds to the Byzantine architectural and artistic traditions and is a classic example of the Byzantine five-apse cross-domed church. However, the Byzantine architectural forms and methods of construction under the influence of Slavic culture and the tastes of the Kyivan prince acquired a new interpretation. The original feature of the original architectural and spatial composition of the cathedral is a distinct pyramidality: from open single-tiered external and two-tiered internal to the crown composition in the form of a system of stepped vaults and thirteen cupolas, headed by a central cupola. 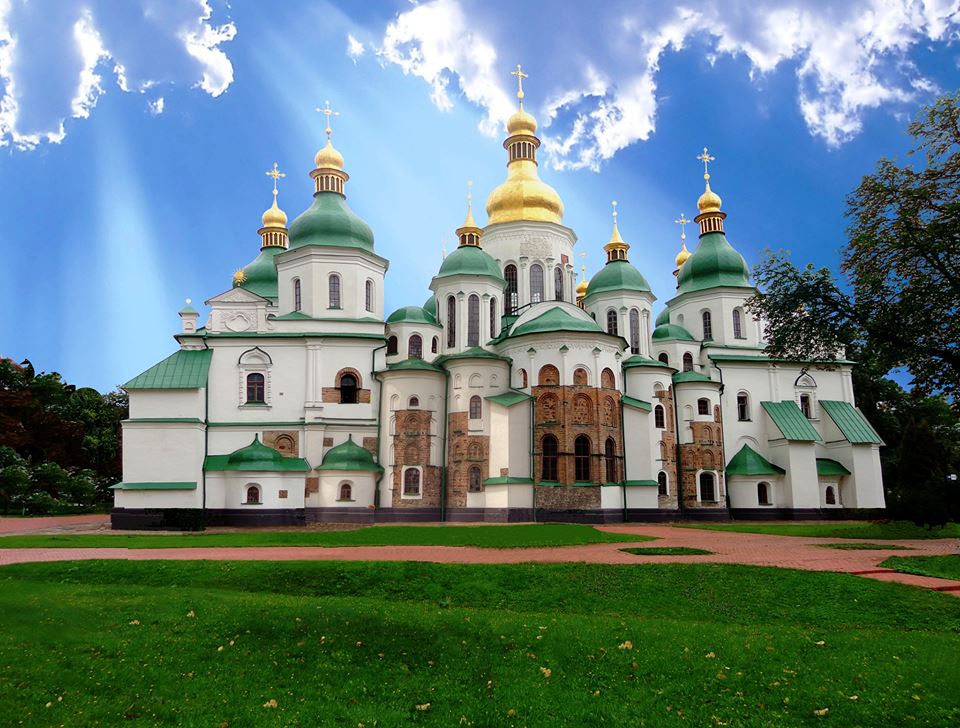 As a result of repair and restoration works of the late 17th – early 18th centuries the cathedral has acquired a baroque appearance, which in its main features has survived to this day. The characteristic dynamic pyramidal-spatial composition of the original core was somewhat relieved by the addition of the second floors above the northern and southern external galleries and the construction of six new large cupolas. However, even now we see a clear vertical axis of the central part of the temple. The architectural mass, growing to the center, ends with a dominant central cupola, which unites around a complex composition of eighteen cupolas and cruciform cylindrical vaults.

The almost 1000-year existence of the cathedral testifies to the extraordinary expediency and perfection of its engineering and architectural structure, its masterful technical execution.

The cathedral has preserved an ancient interior and a unique complex of mosaics and frescoes of the 11th century, which are true masterpieces of world art. The total area of ​​the frescoes of the 11th century is about 3000 m2, which is about a half of the original painting area. Of the 640 m2 of mosaics, 271 m2 have survived. In places of loss of ancient images is an oil painting of the eighteenth – nineteenth centuries.

With the construction of the monastery buildings around the Cathedral of St. Sophia in the eighteenth century (Bell Tower, Refectory, Bread, Metropolitan’s Residence, Bursa, Fraternal Corps, South Entrance Tower, Zaborovsky Gate) formed an architectural ensemble, which became a shining example of the monastery ensemble of the Baroque era. The ensemble still retains its historical role of the main ensemble of the Upper Town and plays an active compositional role in it.

For centuries, the cathedral has preserved a unique harmony of architectural forms, expressive national flavor and, together with other cultural heritage sites, forms the traditional historical environment of Kyiv.

Welcoming remarks by Nelia Kukovalska, Director General of the National Conservation Area “St. Sophia of Kyiv”, on the occasion of the 30th anniversary of the inclusion of the site in the UNESCO World Heritage List

These days we are celebrating the 30th anniversary of the inclusion of our monument in the UNESCO World Heritage List. It was a great honor for us and a recognition of the cultural, historical, architectural, artistic and urban value of our monument. We have joined a large family of the world’s best objects created by mankind throughout its existence. We were the first of the Ukrainian monuments recognized as such, which the world learned about as treasures of immovable heritage, which in its value characteristics is the property of the whole world.

The oldest components of our site – Saint-Sophia Cathedral – the Wisdom of God and the medieval buildings of the Kyiv-Pechersk Lavra for over 1000 years were the core, the heart of Rus-Ukraine, served as a symbol of its spiritual importance in the world, the starting point of our European kinship and close cooperation with the Christian world. Together with the buildings of later times, they are still symbols of our state, cultural and spiritual centers, where the most significant events take place and history continues to be created…

Being recognized by UNESCO since December 12, 1990 and being under its protectorate, we have received additional opportunities to develop and preserve our unique monument, its proper protection and promotion in the world. Since then, its preservation has become not only a matter of national importance, but also a matter of world importance.

During these years, with the support and assistance of the WHC UNESCO, international projects and numerous scientific and cultural events have been established. Our specialists had the opportunity to study and train in UNESCO schools, improving their professional level. We have repeatedly received highly qualified assistance from UNESCO experts and its advisory missions.

With the support of UNESCO, we plan to continue to implement a number of important projects, in particular, thanks to the international assistance of the UNESCO Foundation (IA 2918), approved in 2018, we hope to modernize the hydrogeological monitoring system in the ensemble of Saint-Sophia and Kyiv-Pechersk Lavra.

We also strongly believe that our other valuable objects (St. Cyril’s Church – a masterpiece of architecture and monumental art of the 12th century, St. Andrew’s Church – a pearl of the Baroque of the 18th century, by the famous Italian architect Rastrelli, which now belongs to the Tentative List) will expand the nomination and will be jointly included in the World Heritage List.

So, once again, I congratulate all of us on the 30th anniversary of our listing and express my sincere gratitude to the UNESCO World Heritage Committee for its tireless and constant support, for the professionalism of its team, for the great efforts that have made many monuments around the world recognition, protectorate, protection and inspiration for further development.