Cross-encolpion of the 13th century

Cross-encolpion of the 13th century

In previous posts, we have already reported the discovery of the cross-encolpion of the 13th century during archeological excavations near St. Sophia Cathedral in November this year. This was also reported in the media.

At that time, most of the surface of the cross was contaminated and only part of the images could be seen. Now, thanks to the efforts of the restorer Olesia Skoromna, we have the opportunity to see in detail all the images and inscriptions on the cross. Cleaning from surface contamination required painstaking work of several days, because the cross was in the ground for almost eight centuries. The ground that “stuck” to the surface had to be removed with a soft miniature brush and a special solution so as not to damage the surface.

And here, in front of us is a cross-encolpion, on the front of which there is a relief image of the figure of the Virgin with prayerfully open palms in front of her chest. In the middle of the cross, around the Mother of God, there is an inscription “С[ВѦ]ТАѦ БОГО[РОДИ]ЦЕ ПОМАГАЙ” (“Seek for Your succor, Saint Mother of God”). The ends of the cross are decorated in the form of round medallions; they contain relief images of saints. In the side medallions are Saints Cosmas and Damian, and in the upper and lower medallions are Saints Peter and Basil the Great. They are accompanied by inscriptions: КОЗМА, ДАМѦНЪ, ПЕТРЪ, ВАСИЛ (KOZMA, DAMѦNA, PETER, VASIL).

All the inscriptions are embossed, made in a “mirror” reflection – the master cut the letters on the foundry from directly, as if not taking into account that when casting the inscriptions will be reversed. Academician Borys Rybakov believed that encolpions with mirror inscriptions appeared in 1239–1240, after the northeastern lands of the Kyiv state were invaded by the Mongols. These encolpions were made in one of the jewelry workshops in Kyiv, in connection with the threat of invasion by the Mongol hordes – the Mother of God, the prayer to whom is on the cross, was supposed to defend them from Kyiv. The mirror inscription, it seems, had a sacred meaning and was to strengthen the protective function.

It is known that between the wings of the encolpion crosses, relics were placed in the recesses – holy relics, consecrated cloth or a part of the Life-giving Cross. After the find is handed over to the collections of the National Conservation Area “St. Sophia of Kyiv”, it will be sent for restoration, during which it is planned to completely clean the cross from contamination and open the folds. It is possible that a relic has been preserved in the middle of our find. So stay tuned. 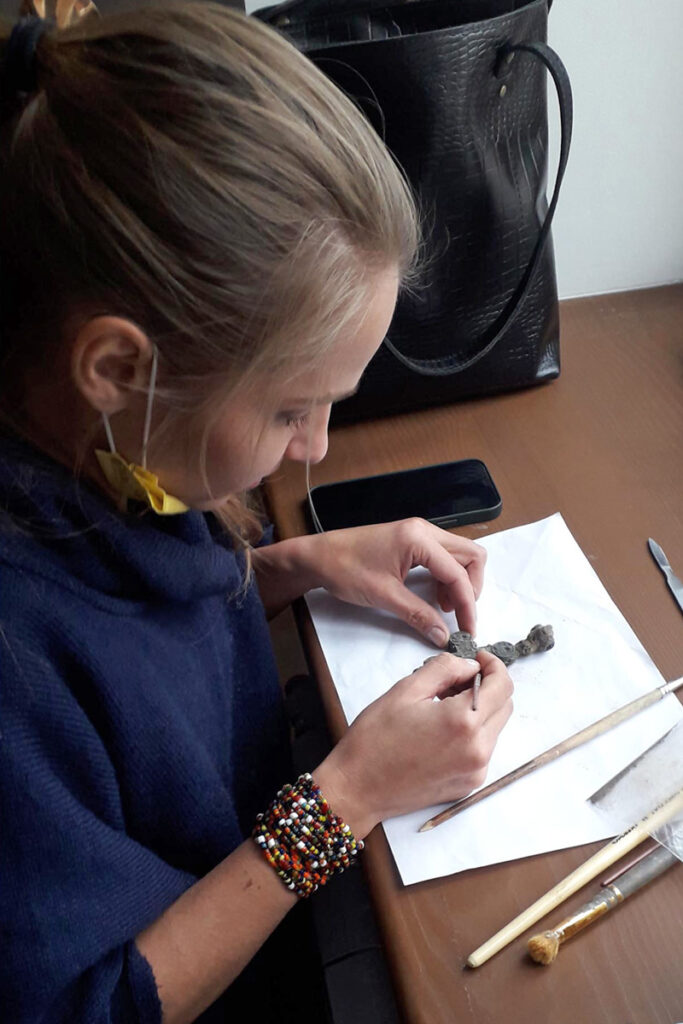 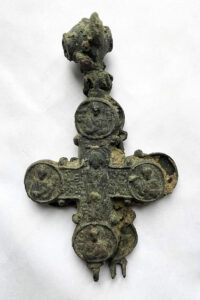