The world-wide museum community finds thousands of ways during the quarantine period to continue sharing knowledge with its visitors, encouraging them to stay home. One of the most common and interesting ways is museum flash mobs. So, the other day, the British Yorkshire Museum has launched a new flashmob #CreepiestObject, as part of which it urges museums to share photos of the scariest museum exhibits. National Conservation Area “St. Sophia of Kyiv” joins the flash mob with tremendous pleasure. So, for your attention, our exhibit in the #CreepiestObject flashmob is a “Gothic Games” mural in the northwestern tower of St. Sophia Cathedral in Kyiv, beginning of the XI century.
The “Gothic Games” mural, also known as “Battle of Mummers”, is a part of the stairs towers murals series of St. Sophia Cathedral in Kyiv, the paintings of which tells of the wedding of Prince Volodymyr Svyatoslavych and Anna Porphyrogenitus. The mural depicts a theatrical duel of a man in a dog mask holding a spear with a mustached beardless warrior, armed with an ax and a small round shield. The man in mask (cynocephalus) is dressed in a beast mask with an open toothy mouth, that is, he demonstrates a beastly grin before attacking the enemy. Goths are dressed in narrow pants and boots made of thin leather, which fit the leg; on the thighs of the mimic we see red, possibly leather, triangular belt-shield. During the Rus-Ukraine period, it was widely believed that a warrior, a sorcerer, or a common man turned on a wolf, girding himself with a sacred belt. The werewolf regained his humanity by removing a similar ceremonial belt. A detailed description and plot of the frescoes of the towers is in the book by Nadiya Nikitenko “The Secular Frescoes of St. Sophia of Kyiv. Mysterious History Code”. 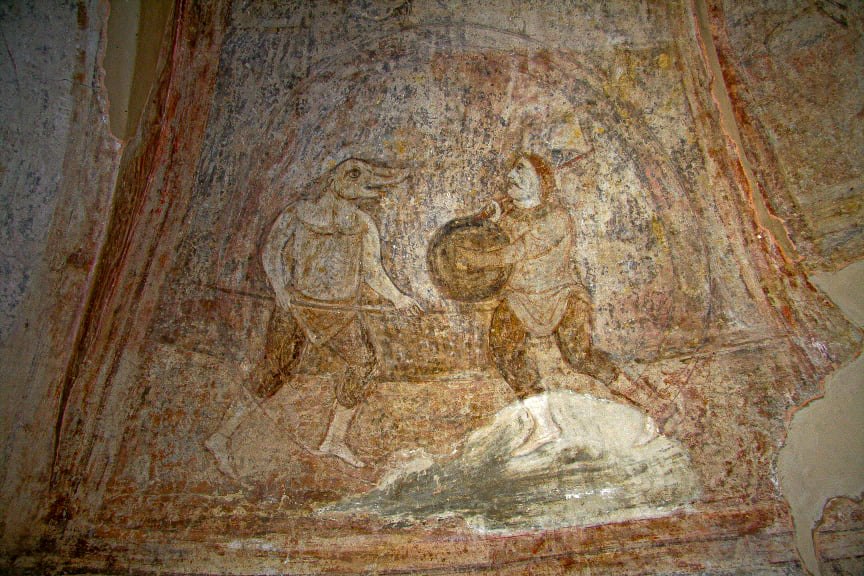