Anna Porphyrogenita – the wife and companion of Volodymyr the Great: frescoes of Sophia testify

Home » news » Anna Porphyrogenita - the wife and companion of Volodymyr the Great: frescoes of Sophia testify

Anna Porphyrogenita – the wife and companion of Volodymyr the Great: frescoes of Sophia testify

There is a person in our history who has made an invaluable contribution to the people’s destiny, but this person is undeservedly forgotten. But the memory of her is preserved in the Sophia of Kyiv millennial. It is about the wife and partner of Prince Volodymyr Sviatoslavych in the baptism of Rus-Ukraine, the Byzantine princess Anna. Born on March 13, 963, in the Porphyry Hall of the Imperial Palace, she was called Porphyrogenita, the princess by birth, who was born when her parents ascended the throne. And this, according to the concepts of those times, meant the highest nobility in the whole world at that time.

Anna was a paternal fifth generation blood princess. Her great-grandfather was the founder of the Macedonian dynasty, Emperor Basil I, called the Macedonian (867-886), who was born into a family of poor Armenian immigrants in Macedonia. The period of the Armenian Macedonian dynasty (867 – 1056) was the time of the highest prosperity of medieval Byzantium. Prominent representatives of this dynasty were natives of noble Armenian families, emperors-warlords Nikephorus II Phokas (963-969), John I Tzsimiskes (969-976) and especially – Anna’s brother Basil II the Bulgar-Slayer (976-1025). The dynasty also gave Byzantium emperors-scholars, legislators and writers – Anna’s great-grandfather Leo VI the Philosopher (886-912) and grandfather of Constantine VII Porphyrogenitus (945-959).

In sources that contain scanty information about Anna, and thus in historiography, Anna is mentioned only incidentally, in the context of the story of the baptism of Volodymyr and Rus’-Ukraine. At the beginning of the reign of Anna’s brothers Basil II and Constantine VIII in Byzantium, a revolt broke out by the usurping military leader Bardas Phocas, which put the legitimate emperors in a dead end. They appealed to Prince Volodymyr of Kyiv (980-1015) for military assistance, but in return were forced to agree to Volodymyr’s counter-demand to marry Anna, although on the condition of the baptism of the prince and his people. The demand of the pagan prince Volodymyr to give him a porphyry-born princess was offensive and unprecedented for the Byzantines, because even the Christian rulers were not considered equal by the Byzantines. The emperors of the Holy Roman Empire Otto II and his son Otto III, the Bulgarian Tsar Samuel, and the King of the Franks Robert II the Pious courted Anna in vain. Otto II got a refusal in humiliating form, and Otto III and Samuel were subjected to ridiculous deception by the Byzantines.

The revolt was suppressed by a 6,000-strong military corps sent by Volodymyr, but the emperor was in no hurry to fulfill the agreement. Then Volodymyr seized Korsun (Chersonesus, Byzantine Сherson) – an outpost of Byzantium in the Crimea (in modern Sevastopol). Then he sent a request from there to the emperors to send Anna to him, threatening if they refused to turn to Constantinople. Despite Anna’s tears, she was sent with dignitaries and priests to Korsun, where Volodymyr’s baptism and his marriage to Anna took place – these events played an exceptional role in the history of Rus’-Ukraine.

Together with Volodymyr, Anna ruled Rus’ for 22 years (989-1011), which marked a fateful epoch in its history – the adoption and establishment of a new faith, the building of the Christian state and the Church. The role and activity of Anna, around whom the Byzantine spiritual and cultural elite rallied, are evidenced by ancient authoritative sources. The German chronicler Thietmar of Merseburg (d. 1018) says that Volodymyr accepted the holy Christian faith at the insistence of his wife Anna. It is confirmed by the chronicle “The Tale of Bygone Years”, which tells of the baptism of the suddenly blind in Korsun Volodymyr on Anna’s advice: “Get baptized – you’ll see the light”, what happened. Arab Christian historian of the XI century Yahya of Antioch notes that Anna brought with her to Rus’ “metropolitans and bishops and they baptized the Tsar and all those whom his lands embraced,” and after arriving in Kyiv, “built many churches in the country of the Rus’.” It is known from sources that Anna was Volodymyr’s adviser and co-author in concluding the church’s charter, made rich donations from her own treasury to the Tithe Church, and received foreign ambassadors in Kyiv, which testifies to her high social status and political activity. Today it is already known that Anna together with Volodymyr founded and built not only the Tithe Church (989-996), but also St. Sophia of Kyiv (1011-1018), so together with him she is widely glorified in the mosaics and frescoes of the cathedral. The frescoes of Sophia of Kyiv show that during the reign of Volodymyr and at the beginning of the reign of Yaroslav (1016-1018; 1019-1054), who completed his father’s work in creating the cathedral – the “Rus’ metropolitanate”, Anna was an iconic figure in the church and political life of Rus’ and Byzantium. Secular frescoes of the stair towers of Sophia, leading to the prince’s choir, recorded the reception at the turn of 987/8 in Constantinople the marriage embassy of Volodymyr by Emperor Basil II at the hippodrome and the coronation of the royal bride Anna during her engagement with Volodymyr. No wonder Anna is called the “Tsarina” in all sources. In the prince’s portrait in the central nave of Sophia, Volodymyr and Anna appear in royal attire as crowned statesmen. Volodymyr is also depicted on his coins, Anna – on miniatures. According to then-matrimonial norms, they received the Caesar’s title, which raised the prestige of the Kyiv dynasty. It is no coincidence that Yaroslav the Wise called his older children Volodymyr and Anna. Apparently, even then the names of the princely couple of the Baptists of Rus’ were preparing for canonization, but for unknown reasons this did not happen. Volodymyr was canonized only in the thirteenth century, but Anna was not canonized and was virtually forgotten as a historical figure.

Historians believe that Anna persuaded Volodymyr to arrange on the Holy Mount Athos the Rus’ monastery of the Virgin Xylurg (Drevodel) and persuaded her brothers Basil II and Constantine VIII to provide one of the monasteries of Mount Athos. This oldest Rus’ monastery, mentioned in the Athos Act of 1016, was dedicated to the Blessed Virgin, as was the Tithe Church.

When Anna died in 1011, she was buried in a marble sarcophagus in the Tithe Church, and in 1015 Volodymyr found his resting place next to her, also in a marble sarcophagus. According to Thietmar of Merseburg, their sarcophagi stood openly in the side altar of St. Clement of Rome, that is, there was an open access arranged to the prince’s burial site, consecrated by the relics of the “apostolic man” Pope Clement, which was brought by Volodymyr from Korsun and laid in the Tithe Church.

Anna carried through a real spiritual feat as a person and as a stateswoman. Anna’s invaluable contribution to the national history of Rus’-Ukraine requires a worthy recognition of her merits. For a long time we have consistently emphasized that the most adequate honoring of Anna would be her canonization as a Holy and Equal to the Apostles princess of Kyiv, so that she would take a worthy place among the Saints next to her husband Volodymyr the Equal to the Apostles. Sophia of Kyiv convinces us of this. The need for such an act was evidenced by the current preparation for the canonization of Anna by the Orthodox Church of Ukraine. 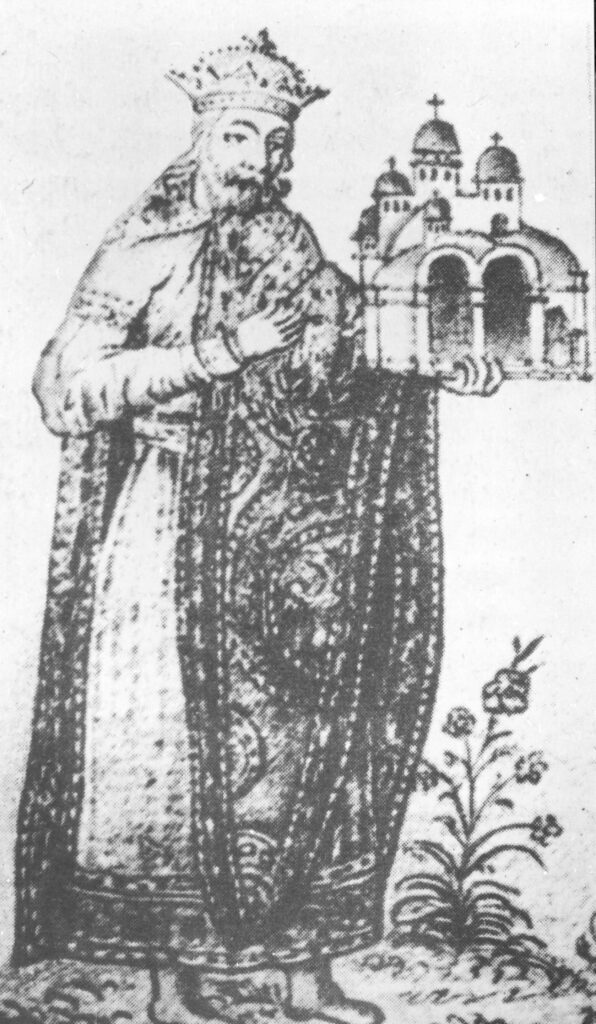 Volodymyr in the prince’s portrait 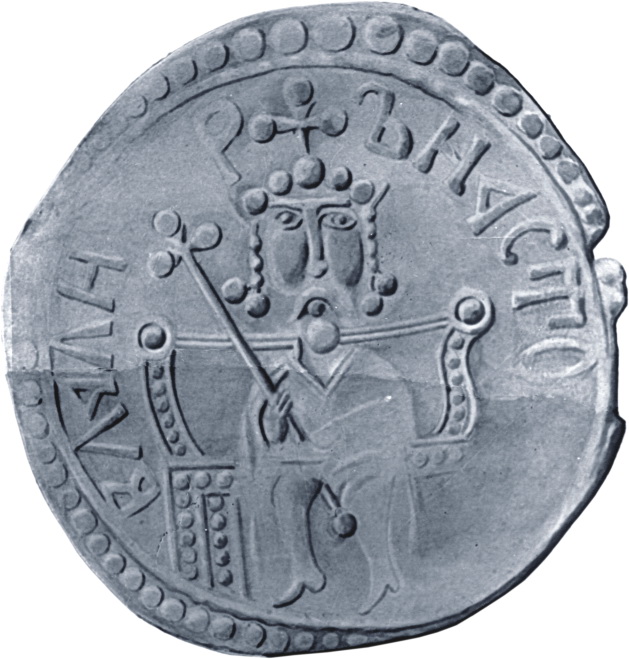 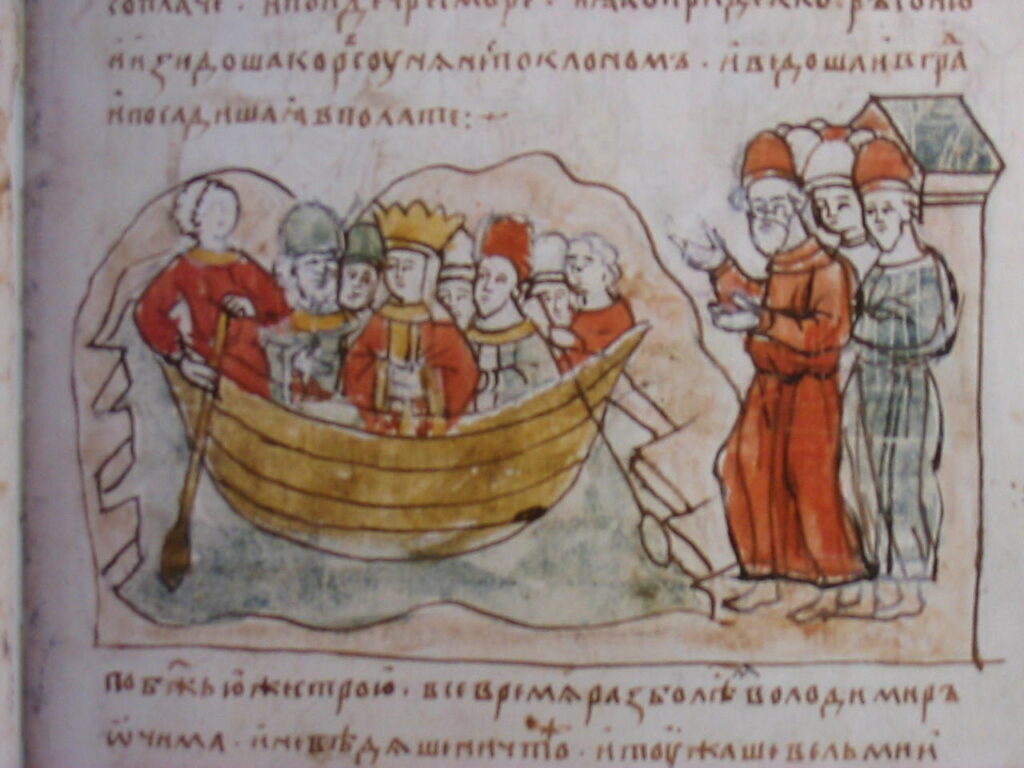 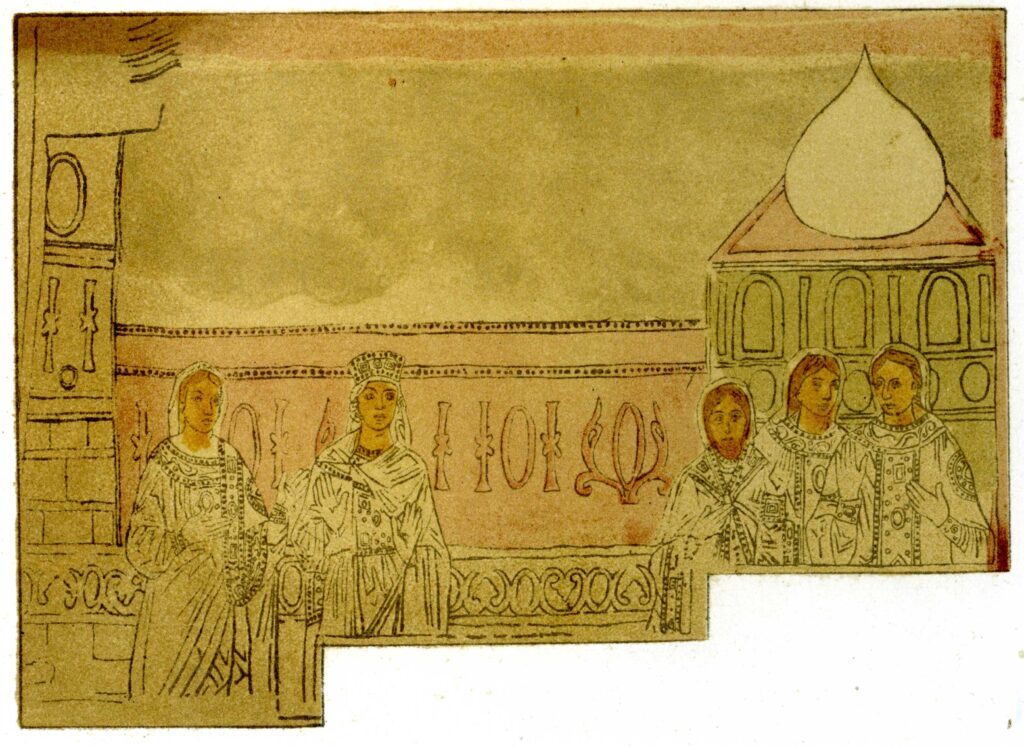 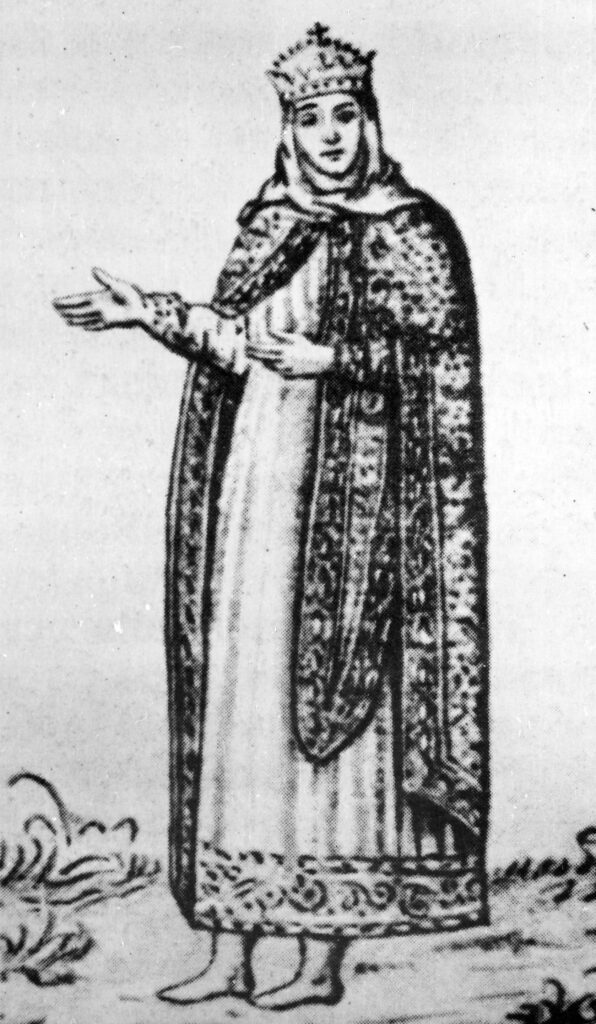 Princess Anna in the prince’s portrait 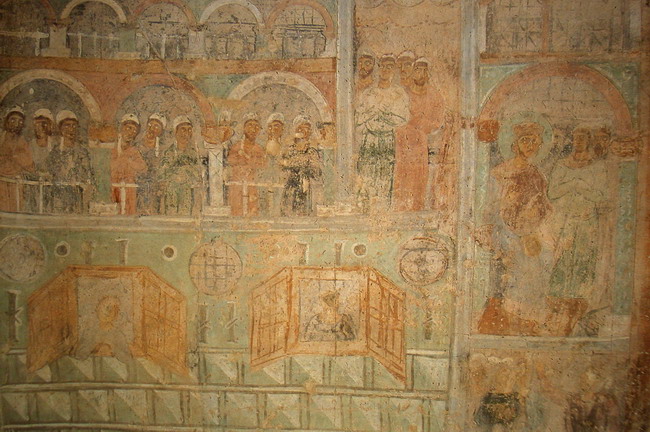 Basil II and spectators at the hippodrome