This hope was also shared by princes from the Olgovych family, buried in St. Cyril’s church in Kyiv. On the walls of burial niches from the XII century fresco images of angels are preserved; they helped the souls of the dead to rise to the Kingdom of Heaven.

THE SECRETS OF ST. CYRIL’S CHURCH

The dead will sleep forever,

Their graves are gone,

But the honor must be done!

The funeral purpose of the St. Cyril’s church of the XII century is revealed in the architecture of its narthex. In its southern and western walls there are four burial niches – arcosolia (from Latin arco – “arc”, solium – “sarcophagus”). These niches were designed by the customer of the temple, Prince Vsevolod Olgovych.

The first of the known burials in the Church of St. Cyril dates back to 1179. This is the burial of the wife of Vsevolod Olgovych, daughter of Mstyslav the Great, Maria Mstyslavivna (Agafia). It is said in Hypatian Chronicle under 1179: “That same summer, Princess Vsevolozhaya ceased, accepting the monastic scheme was buried in Kyiv, at St. Cyril …” [i].

The chronicle does not indicate the specific place of her burial in the temple, but a careful study of archival materials, as well as fresco painting of the Church of St. Cyril, suggests that it is located in the southwestern burial niche.

Mary was the daughter of Prince Mstyslav Vladymyrovich, the granddaughter of Vladymyr Monomakh. The Christian name is Agafia. She gave birth to five children: Svyatoslav Vsevolodovych (c. 1123–1194), Yaroslav Vsevolodovych (1139–1198), Anna Vsvolodovna, Zvenislav-Anastasia Vsevolodovna (died between 1155-60) and another daughter whose name is not known for sure. She survived her husband by 33 years. Before her death, she took a vow. 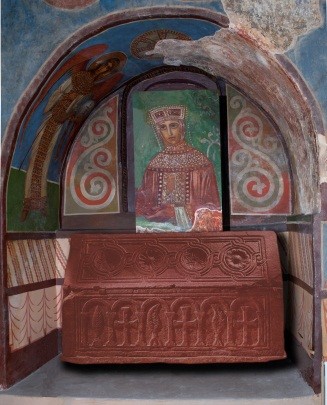 The outline of the seal of Princess Maria Mstyslavivna

According to the annals, in the same year, in 1179, the daughter of Mary Mstyslavivna, the Polish princess Maria Kazymyrivna, died and was buried in the Church of St. Cyril.

In 1178 Vsevolod Cherny (Red), grandson of Vsevolod Olgovych and Maria Mstyslavivna, married the daughter of the Polish King Casimir.

In 1179 Svyatoslav Vsevolodovych chose the daughter of the great Polish prince Casimir II the Just Mary as the bride for his son Vsevolod Svyatoslavych, who at the time of his marriage was only fifteen years old. A year later, Maria became ill, according to V. Tatyshchev, after a difficult birth, she became a nun (named Anastasia) and died shortly afterwards. After that, her son, Mykhail Vsevolodovych, remained. 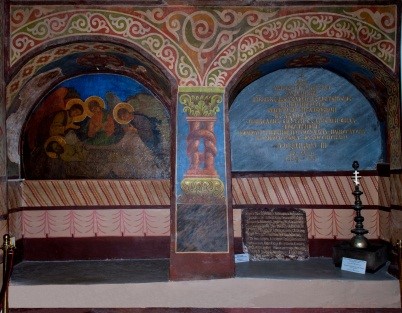 Arkasolia niches. The southern part of the narthex of St. Cyril Church, where the sarcophagi of Maria Kazymirivna and later her husband Vsevolod Chernyi may have been arranged.

July 27, 1194 Cyril’s necropolis was replenished with a famous burial place. In the palace of the Cyrilovski country residence at the age of 78t the eldest son of Vsevolod Olgovych died, Grand Duke of Kyiv, one of the main characters of the ancient poem “The Lay of the Warfare Waged by Igor” – Svyatoslav Vsevolodovych. On July 25, Svyatoslav fainted, and when he came to his memory ordered to take the vow. In the evening he died. They buried the dead in his cherished paternals Cyril monastery (“was buried in the monastery in the church of St. Cyril that was founded by his father”) [iii]. 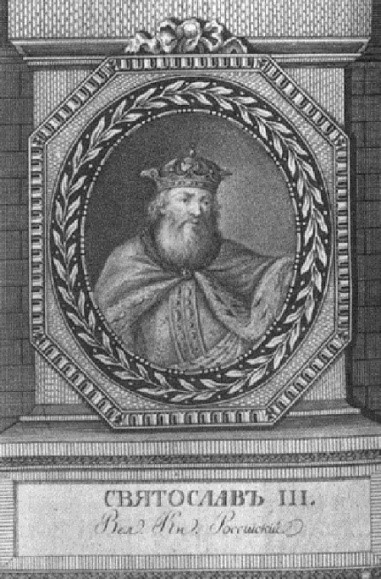 It is believed that Svyatoslav was buried in the niche of the northwestern part of the narthex. 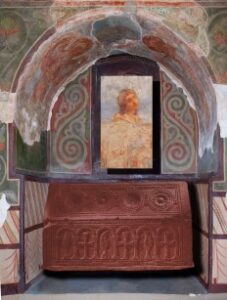 Collage of O. Kostyuchok. Image of Prince Svyatoslav from the painting of the Cyril Church.

In 1215, the son of Svyatoslav – Vsevolod Cherny (Red), was buried in the Church of St. Cyril. He was first mentioned in Hypatian Chronicle in connection with his marriage to the Polish princess Maria Kazymyrivna in 1178. Vsevolod Chernyy died as Prince of Chernihiv but was buried in the family burial ground of the princes of Olgovych – in the Church of St. Cyril in Kyiv. This burial was the last in the ancient history of the Cyril necropolis.

We think that the princely sarcophagi were made of pink slate, from which the floor of the temple and the parapets on the choirs were laid out, and the ancient altar wall templon. Today, unfortunately, there are no princely sarcophagi. It is believed that they were robbed by the invaders of Prince Janusz Radziwill in the 17th century. The funeral niches and fresco images of angels on the slopes of these niches have been preserved, and they preserve the memory of those from the 12th to the 18th centuries died under their cover. Apparently, the angels helped the souls of the dead to ascend to Paradise and contemplate their souls on visitors to the Church of St. Cyril.

The Cyril monastery with all its secrets awaits admirers of history and art.

The author is Irina Margolina.