“THE STAR THAT SHINES FROM KYIV”, dedicated to the 370th anniversary of the birth of St. Dymytrii of Rostov.

The exposition is arranged on the second floor of the “St. Cyril’s Church” museum. Address: 12 Oleny Telihy Street, Kyiv 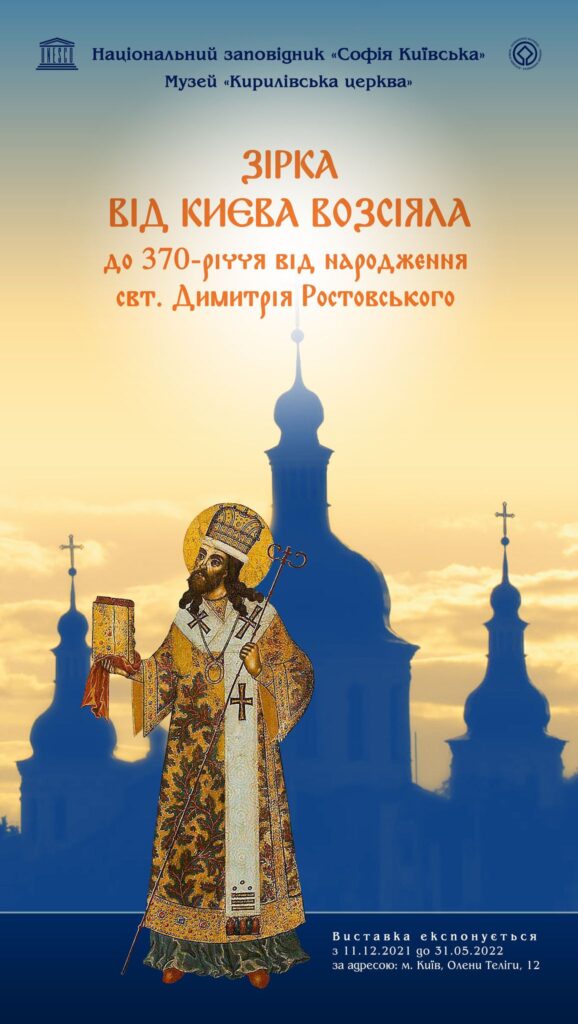 THE STAR THAT SHINES FROM KYIV

December 2021 marked the 370th anniversary of the birth of the glorious saint of Rus-Ukraine, Dymytrii of Rostov (secular name Danylo Savych Tuptalo, 1651–1709), a native of Makarov, near Kyiv. On the occasion of this date, the exhibition “THE STAR THAT SHIS FROM KYIV” is opened in the “St. Cyril’s Church” museum of the National Conservation Area “St. Sophia of Kyiv”.

Dymytrii of Rostov (Danylo Savych Tuptalo) is Ukrainian church figure, scientist, writer and preacher, theologian, hagiographer, author of “Lives of Saints”. The life of Danylo Tuptalo was closely connected with the Cyril’s Holy Trinity Monastery in Kyiv, where in 1668 he was named Dymytrii in honor of St. Demetrius of Thessaloniki accepted monasticism from his favorite teacher – Abbot Meletii Dzyk.

As an outstanding preacher, Dymytrii of Rostov became famous as the “Ukrainian Chrysostom”, known not only in Ukraine but also in Lithuania and Belarus. During his monastic life he was the abbot of many monasteries – in Baturyn, Hlukhiv, Chernihiv; from January to June 1697 – abbot of the Kyiv-Cyril’s Monastery.

The patron of the Cyril’s Monastery was the father of Abbot Dymytrii – the Cossack centurion Sava Tuptalo. In his honor in June 1693, on the Day of the Holy Trinity, Fr. Dymytrii pronounced a brilliant sermon in St. Cyril’s Church. He took care of St. Cyril’s Church throughout his life, even when he was appointed Metropolitan of Rostov and Yaroslavl. Metropolitan Dymytrii died in 1709, and in 1757 he was canonized.

In the choirs of St. Cyril’s Church an altar in honor of St. Dymytrii of Rostov was arranged and consecrated in the 19th century. In 1944, during the renovation of the museum in St. Cyril’s Church of, a relic was found in the choir – a board with a memorial inscription that was part of the kiot of the Tuptalo ancestral icon – the Vatopedi Mother of God. The icon and the kiot have not survived, and the board is presented as a rarity in the exhibition.

In the northern part of the narthex of the St. Cyril’s Church, a pantheon of burials of members of the future saint’s family was created: parents Sava and Maria, three sisters and a nephew. Almost immediately after the death of Sava Tuptalo (1599–1703), a portrait was erected over his burial. Over time, the portrait grew old, so it was repeatedly replaced by new ones. Unfortunately, the fate of those original portraits is unknown. Today, the memory of the Tuptalo family is being revived in the museum within the project “Revival of the Lost Shrines of the Cyril’s Church” (initiator and author of the project – Candidate of Historical Sciences Iryna Marholina). In 2021, Honored Artist of Ukraine Oleksandr Olkhov created a life-size portrait of Sava Tuptalo and presented it to the Conservation Area. This portrait, as well as works of art from the funds of Kyiv museums are presented at the exhibition.

We express our sincere gratitude to the patrons of the project – Ihor Poluektov and Oleksandr Olkhov, partners of the exhibition – the National Preserve

as well as Kyiv artist Olena Melnikova for the provided photos.