For centuries, Sophia of Kyiv was the burial place of the highest clergy and princes, the first of whom was Yaroslav the Wise, buried in 1054. In this year in the “Tale of Bygone Years” it is written: “The Grand Duke of Rus’ Yaroslav… was laid in the marble tomb in the church of St. Sophia”. His marble sarcophagus has stood for a long time at the eastern end of the northern inner gallery (now the Volodymyr Altar). The well-preserved sarcophagus is not only a valuable historical relic, but also a unique work of art. It is made of white Prokonesian marble and was probably brought from Byzantium. The sarcophagus consists of a four-ton rectangular box and a gable weighing 2 tons, made of two solid blocks of marble. Its length is 2.33 m, width is 1.17 m, height is 1.63 m. The thickness of the walls reaches 13 cm. Made according to traditional antique patterns, the sarcophagus resembles an antique dwelling with a gabled roof and four acroteria protrusions at the corners. 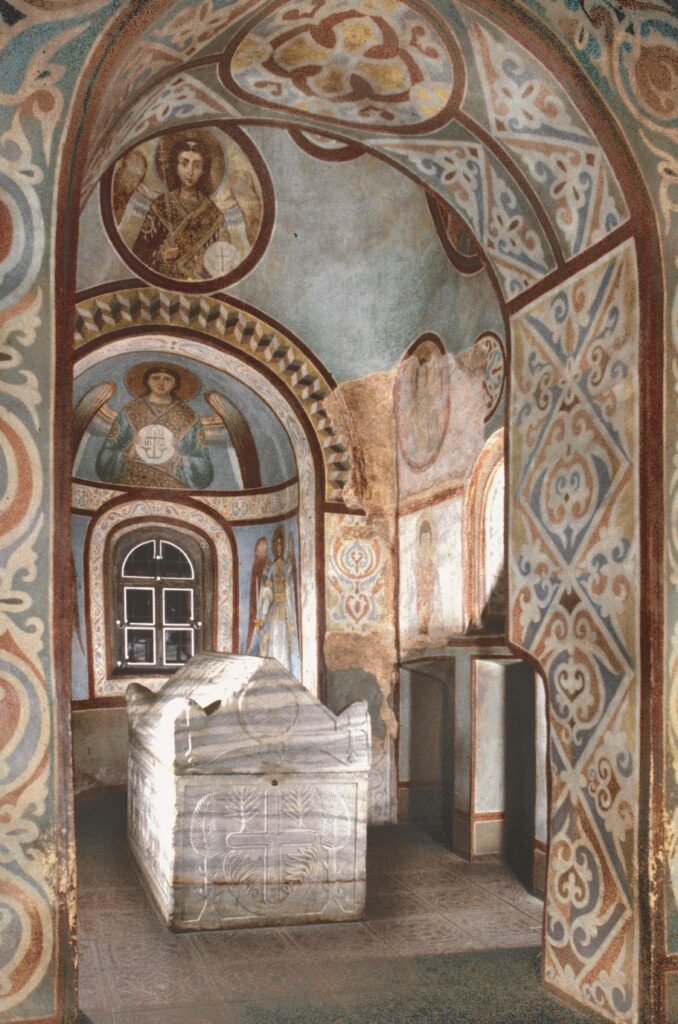 Sarcophagus of Yaroslav the Wise

The sarcophagus is richly decorated with carvings made by a first-class master. Its plot motifs and symbolism are traditional and date back to early Christian times. In the art of that time, images of Christ were impossible due to persecution, so there were various symbolic codes. A flourishing cross is carved on the west end facing the viewer – a symbol of the Tree of Life and a monogram of Christ (chrism) in a wreath of glory. Evergreen cypresses, flanking the cross, symbolize immortality and eternal life. At the gable of the sarcophagus, the abbreviation “ФХФП” is carved – the initial letters of the Greek phrase “the light of Christ enlightens all”, taken from the liturgy of the Presanctified Gifts. Christ, the faithful and the Eucharist are symbolized by images of a vine with bunches carved on the slopes of the gable; the birds fluttering in the branches of the Garden of Eden probably mean the souls of the dead. The fish depicted here is a symbol of Christ the Savior, as the Greek word “fish” (ΙΧΘΥΣ) is an abbreviation of Christ’s name: “Jesus Christ the Son of God the Savior.”

The sarcophagus was discovered and studied in 1936, 1939, 1964 and 2009/10. In 1936, randomly mixed bones of male and female skeletons, as well as several children’s bones were found here. According to researchers, the remains of children could have come here by accident – during or after the robbery, because, judging by the disturbed condition of the burial, the sarcophagus was robbed in ancient times.

In 1939, the remains found in the sarcophagus were sent to the Leningrad Research Institute of Ethnography and Anthropology, where the scattered bones formed the male and female skeletons. It was found that the male skeleton belonged to a man aged about 70 years, who had a life expectancy of 172 – 175 cm, congenital lameness and pathological changes in the right hip joint, which occurred in adulthood. It is known from chronicles that Yaroslav the Wise was lame from childhood, and Eimund’s saga tells of a leg wound that the prince suffered during the battle with the Pechenegs. Yaroslav died at the age of 75, and according to other sources, at the age of 65. Based on these testimonies, scientists have concluded that Yaroslav the Wise was indeed buried in the tomb. In 1940, both skeletons were returned to Kyiv. Unfortunately, in 1943, the remains of Yaroslav emigrants were taken to Poland, and later to the United States. 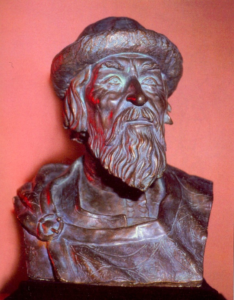 Their current location is unknown. In the sarcophagus there are only female remains, the dating and affiliation of which are explained in different ways. According to S.Vysotsky, they belonged to Yaroslav’s wife Irina, who died in 1050. Anthropologist M. Gerasymov created his sculptural portrait of the prince in 1939, which is exhibited in the cathedral.

After Yaroslav, his son Vsevolod (1093), grandchildren Rostyslav Vsevolodovych (1093) and Volodymyrr Vsevolodovych Monomakh (1125), and great-grandson Vyacheslav Volodymyrovych (1154) were buried in the cathedral. Judging by the chronicle text, the Vsevolodovyches were buried next to each other, although today it is difficult to say where their ancestral tomb was located in Sophia. There is a version that the body of Volodymyr Monomakh was placed in a marble sarcophagus, the lower part of which now stands in the chapel of Saints Anthony and Theodosius (ancient southern inner gallery). For a long time, this sarcophagus was used as a stand for the pedestal of the tomb of St. Metropolitan Macarius of Kyiv. The sarcophagus is a long narrow and low marble box (length – 2.37 m, width – 70 cm, height – 49 cm), decorated on the front side with carved relief.

In addition to the graves of secular rulers, the burials of Kyiv metropolitans were located in Sophia. The first known saint from the chronicles to rest in the cathedral was Metropolitan Cyril II of Kyiv and All Rus’, who died in 1280. During a study of his burial in the southern inner gallery, fragments of silk cloth with gold and silver embroidery depicting Our Lady of Oranta, angels and saints. These fabrics are the oldest of all found in the East Slavic territories, they are the pearl of the repository collections of the Conservation Area. 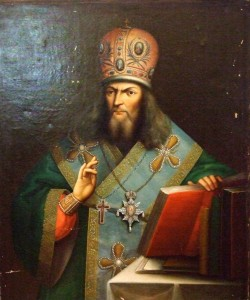 At the end of the 17th century Sophia became the burial place of the Kyiv metropolitans again. In 1690, Metropolitan Gideon (Prince Sviatopolk Chetvertynsky, who came from the Rurik family) was buried there. According to Gideon’s will, he was buried under the north wall of the Volodymyrsky altar, opposite the tomb of his ancestor, Yaroslav the Wise. In the middle of the 18th and the first quarter of the 19th century, there were six more metropolitan burials in Sophia. Under the Assumption Chapel (the ancient southern outer gallery), probably in times of Hetman Mazepa and for himself as a descendant of the Rurikoviches, a large crypt was built, in which, however, he did not have to rest (d. 1709 in Bender). Later, six metropolitans were buried in the crypt: Raphail Zaborovsky (1747), Arseniy Mohylyansky (1770), Gavriil Kremenetsky (1783), Samuil Myslavsky (1796), Hierofei Malytsky (1799) and Serapion Alexandrovsky (1824).

In the 19th century , three other representatives of the higher clergy were buried in Sophia – Archpriest Ioann Lewanda (1814), as well as Metropolitans Eugeniy Bolkhovitinov (1837) and Platon Gorodetsky (1891). All three burials were made under the choirs in the ancient northern inner gallery, rebuilt in the late 17th – early 18th centuries on two altars – the eastern Annunciation alter (later – St. John the Baptist) and the western – the Cathedral of St. John the Baptist (later – Stritensky). The burial of Metropolitan Platon was the last to be done in Sophia. In the gallery you can see a copper memorial sign over the burial of Ioann Levanda (in the eastern part of the room), as well as tombstones (kiots) over the burials of Eugeniy Bolkhovitinov and Platon Gorodetsky (in the western part). 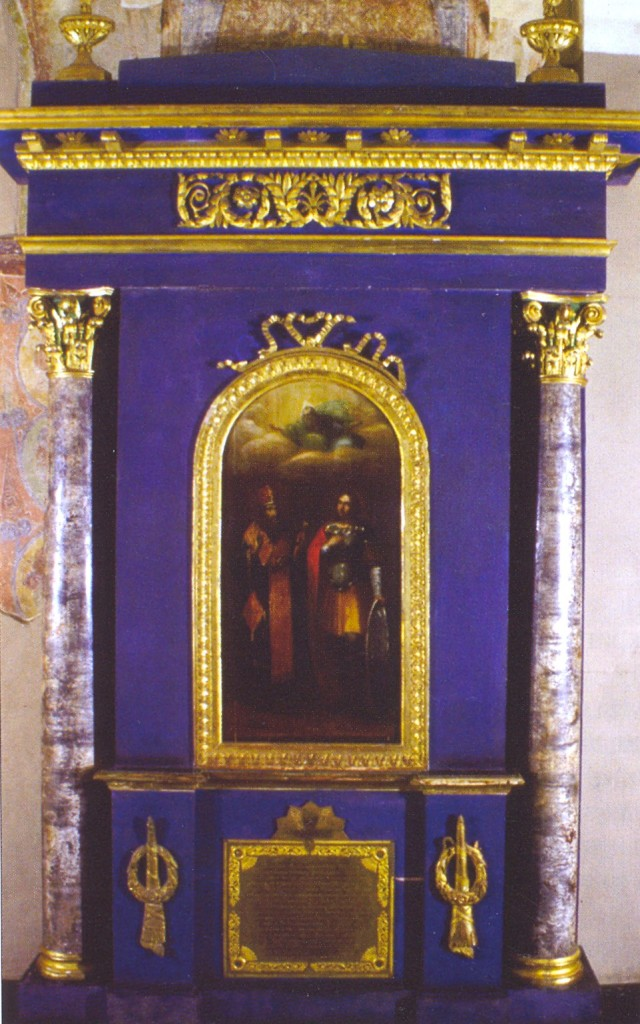 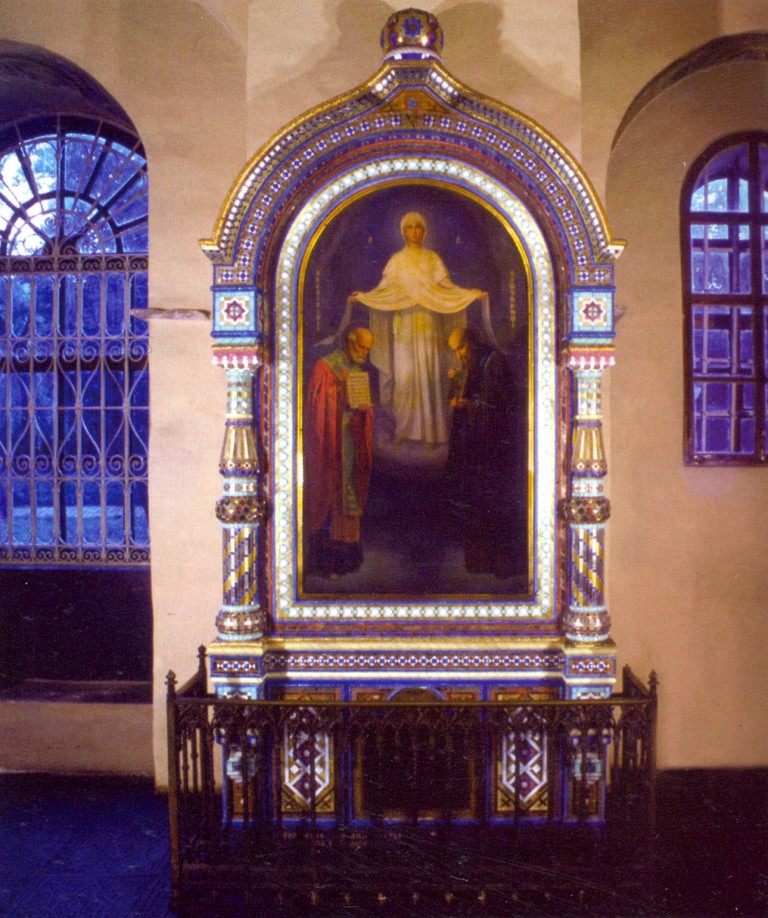