Volodymyr’s daughters, Agafia (Agatha) and Maria Dobroniega, made a match to the English and Polish kings, and Yaroslav’s daughters, Elizabeth, Anna and Anastasia, became queens of Norway, France and Hungary.

The history of the cathedral knows repeated lootings, fires, years of desolation, repairs and reconstruction. In 1240, during the conquest of Kyiv by the hordes of Batu, St. Sophia Cathedral survived, but was looted and devastated. Despite the invasion of the Horde, Sophia remained the metropolitan residence, the spiritual center of all Rus. Under Metropolitan Cyril II (1242-1280), who was an authoritarian hierarch, St. Sophia was repaired and put in order. In the 14th century South-Western Rus fell under the rule of the Lithuanian state. After the transfer of the metropolitan’s residence from Kyiv to Volodymyr on Klyazma, and then to Moscow (1325), the Lithuanian princes initiated the creation of a separate metropolis for their Orthodox subjects. However, the danger of Tatar raids led to the fact that the southern Rus metropolitans almost did not live in Kyiv, having a residence in the capital Vilna or in Novogrudok, near Vilna.

After the Union of Brest in 1596, the cathedral was taken over by the Uniates. The condition of Sophia, for the possession of which there was a fierce struggle, remained very disappointing. The sacristy of the cathedral was looted, the roof was torn off and stolen. In the first quarter of the 17th century the western wall of Sophia fell, blocking the central entrance with debris.

Then the so-called Age of Ruin (1657 – 1687) came, and Sophia fell into disrepair again for several decades.

During the 18th century the interior of the temple is also changing. Its ruined western part is being rebuilt, as a result of which the center of the cathedral becomes more spacious. Old frescoes are plastered and whitewashed, and new oil paintings appear on top of them. The newly created art ensemble was a model of mature baroque, marked by a bright local colouring.

The 19th century was for Sophia an epoch of discovery, study and restoration at the level of that time of its ancient artistic values. In 1843–1853 the frescoes were cleared from later paintings and renewed with oil paints. At the end of the 19th century the era of the first major restorations of Sophia of Kyiv is over. Restoration of the cathedral, carried out in the middle of the 19th century by F. Solntsev and continued at the end of the century by A. Prakhov, opened to the world the largest national monument of architecture and monumental painting, after which the ancient Rus art was talked about as an artistic phenomenon of millennia ago. This was a new point of view in comparison with the accepted in those times attitude to the oldest shrines of Kyiv as Byzantine monuments.

Interrupted by the war, this work was continued in the 1950s by Kyiv restorers L. Kalenichenko, E. Mamolat, and O. Plyushch, and was completed in the 1970s by their students. As a result, ancient frescoes in all parts of the interior of Sophia have been freed from oil layers. In places where frescoes and mosaics of the XI century are not preserved, oil renovations of the XIX century are left. All remnants of 18th century frescoes that survived the restoration of the 19th century were preserved and conserved. Currently, the condition of St. Sophia Cathedral and the ensemble of its monumental painting is monitored by a group of specialists led by the restorer of the Conservation Area A. Ostapchuk. 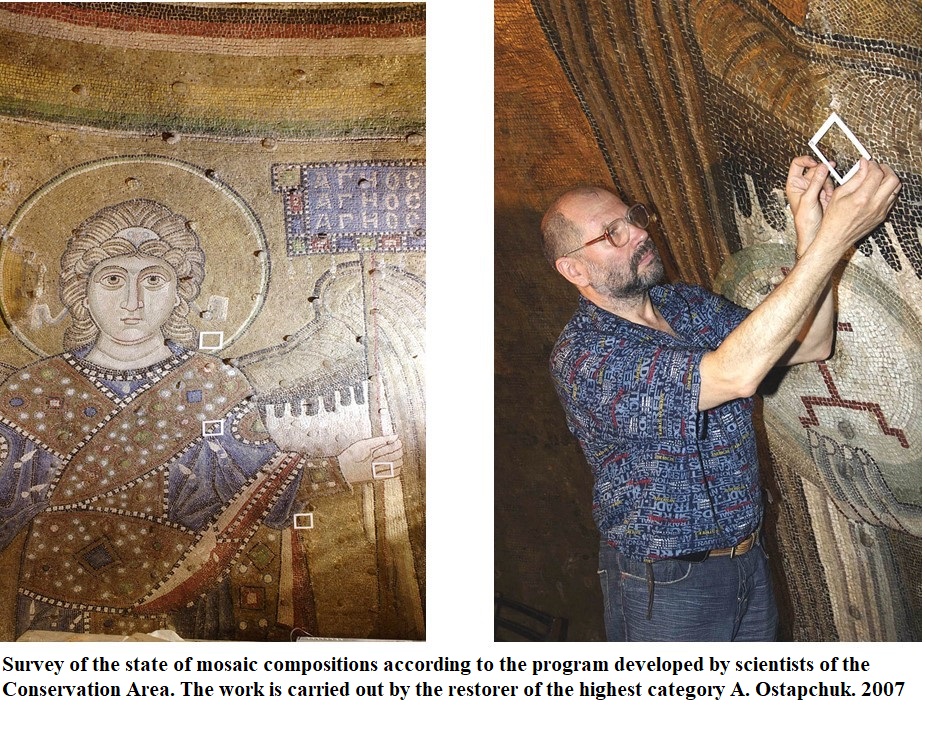 In 1987, an international jury of Hamburg Foundation awarded Sophia Reserve the European Gold Medal for preservation of historical monuments. In 1990, St. Sophia Cathedral in Kyiv, along with the entire complex of monastic buildings, was included in the UNESCO World Heritage List. After Ukraine gained independence, the Conservation Area received the status of National (1994). Since then, its name is the National Conservation Area “St. Sophia of Kyiv”. 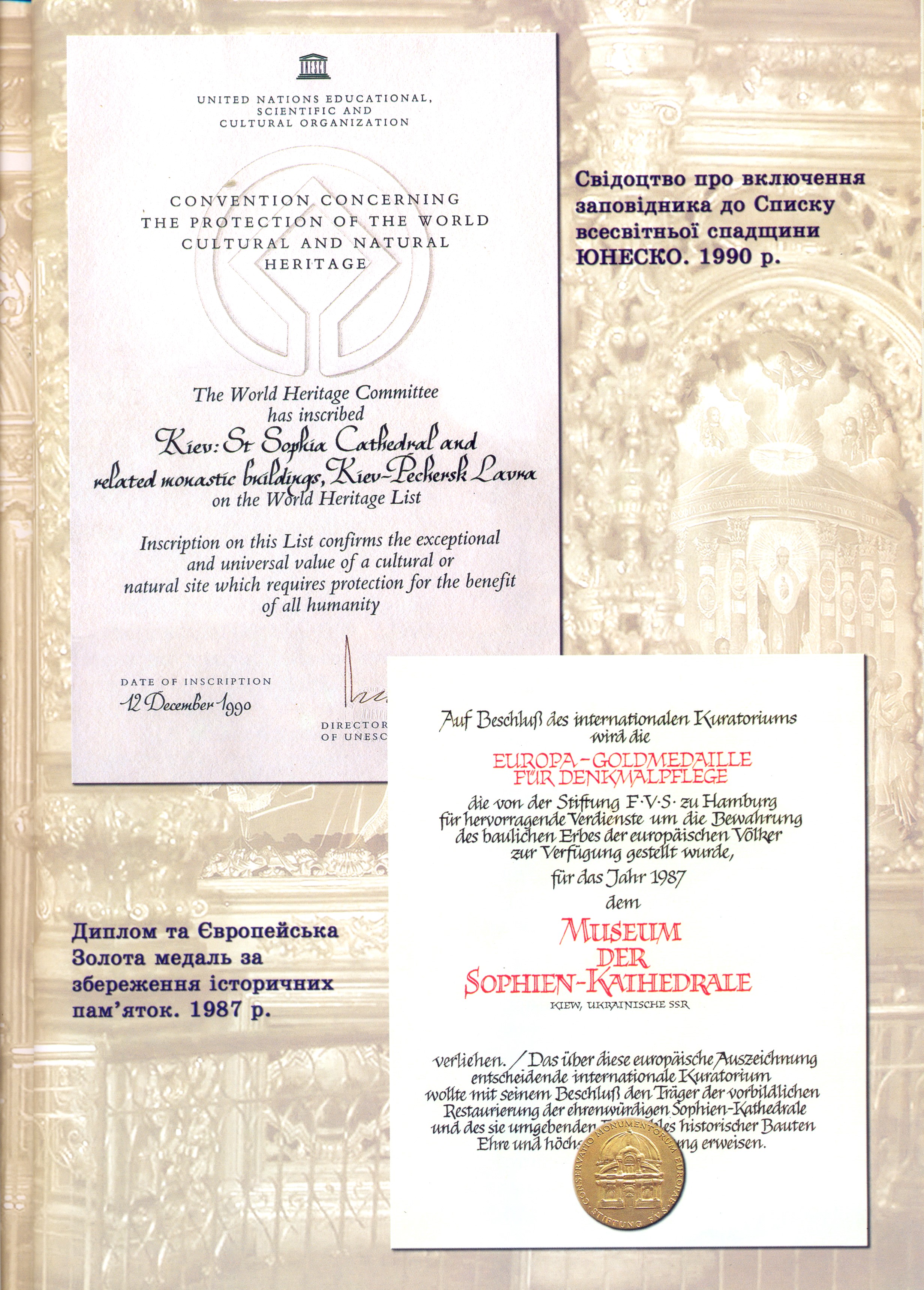