St. Sophia brings to us the living voice of our ancestors. More than seven and a half thousand graffiti of the 11th – early 18th centuries were found on its walls. They are unofficial inscriptions and drawings left in antiquity by clergy and laity on frescoes. So many graffiti have not been found in any other temple. This testifies to the importance of St. Sophia in the historical and everyday life of the people. Researchers and discoverers of most graffiti are scientists of the Conservation Area, Ph.D. Serhiy Vysotsky (1923 – 1998) and a modern researcher, Ph.D. Vyacheslav Kornienko (born 1979). 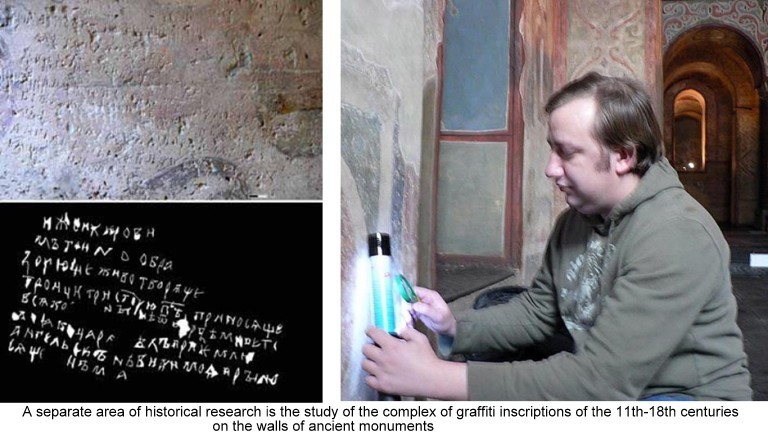 Graffiti with the names of Princess Olysava and her grandsons – mother and sons of Prince Sviatopolk Volodymyrovych, made to their order in 1019 – were found in the princely choirs. Graffiti painted by young men (warriors) of the Novgorod mayor Konstantin Dobrynych, who were in the army of Yaroslav the Wise, who, having come from Novgorod, sat down at the Kyiv throne in 1019, also belongs to the same year. Interesting are the records of the thunder that clapped on March 3, 1052, the “passing” of Yaroslav the Wise on February 20, 1054, the appointment of Hilarion “Rusyn” as metropolitan on February 12, 1051, about the peace on Zhelyan, concluded at the end of the XI century between princes Sviatopolk Izyaslavych, Volodymyr Monomakh, and Oleg Sviatoslavych, who then ruled in the three main centers of Rus’-Ukraine — Kyiv, Pereyaslav, and Chernihiv. The oldest dated inscriptions 1018/21, 1019, 1022 (three inscriptions), 1023, 1028, 1033 (three inscriptions) and 1036, found on frescoes in various places of the cathedral, irrefutably testify to the appearance of Sophia Cathedral in the second decade of the 11th century. Among the graffiti is the first known bill of sale of the 12th century, which testifies to the purchase of Boyan’s land by “Princess Vsevolodova”. This land, bought by Maria Mstyslavivna, the wife of the Kyivan prince Vsevolod Olhovych, may have belonged to the famous singer-narrator Boyan, who is mentioned in “The Tale of Igor’s Campaign”. Other graffiti also contain unique information – it is a whole chronicle of the life of the church, Kyiv and all Rus’-Ukraine. Medieval graffiti inscriptions indicate that the spoken language of Rus’ was the Ukrainian language*.

Since 2010, V. Kornienko has published a complete collection of writings of Sophia of Kyiv graffiti, which will consist of 10 parts in 12 books, 9 parts of which have already been published.