St. Sophia Cathedral preserves the artistic heritage of many generations. A unique architectural and artistic ensemble has been preserved Since Petro Mohyla and Ivan Mazepa times, created in the northern and southern outer galleries, rebuilt at the turn of the 17-18th centuries. In the eastern part of the northern gallery, at the request of Petro Mohyla, a chapel was erected for the relics of Volodymyr, discovered by the Metropolitan in the ruins of the Tithe Church. In the chapel one may see fragments of drawings of 11th and 17-18th centuries. Above the entrance to the chapel and inside of it, on the northern arch and on the south wall, are preserved scenes interpreted in the spirit of the apotheosis of Orthodoxy, illustrating the Akathist Virgin. It is these scenes, renewed with oil paints in the 16th century, that belong to the Peter Mohyla epoch.

The Mazepa epoch made a rich contribution to Sophia’s art treasury. A decorated main entrance was created on the site of the destroyed western outer open gallery. It retained copper gilded entrance door decorated with icons in oval medallions depicting archangels. This magnificent piece of jewelry is made by Kyiv masters. 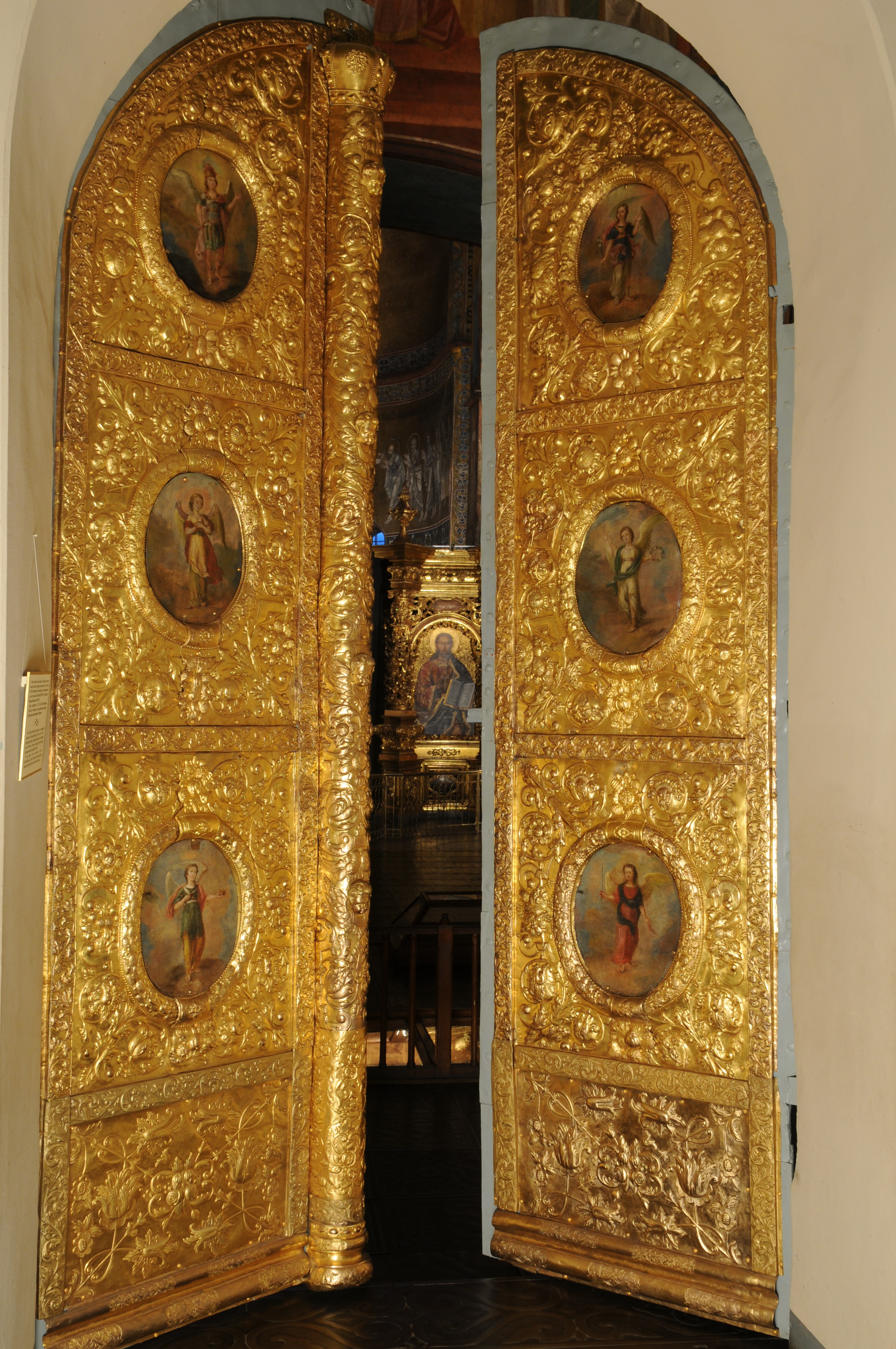 An elegant chapel of the palace type dedicated to the Twelve Apostles was created in the western part of the southern gallery by Hetman Mazepa. It is oriented at the specially arranged at the same time in the eastern wall of the south tower an internal entrance leading to the princes of the choir. There, during the missions, there was a Cossack-elders’ elite, headed by a hetman, whom contemporaries compared with Volodymyr. Deriving his ancestry from the Rurik, the Mazepa sought to imitate them throughout. During the years 2008/9, all plots of this chapel were released from the restoration toning of the 1960s, cleared of later oil covering, restored, and at this time opened for display. Today, this very peculiar architectural volume, which gives a distinctive sense of optimism, parity, national, purely Kyiv color of the Hetmanate era, its patriotic spirit, is taken in a completely new way. The altar composition of the chapel is a monumental image of the throne of the Savior with priest Volodymyr and Olga. The prince is depicted in royal robes, on his head is a “Monomakh’s hat.” St. Volodymyr holds the sword firmly and raises the cross, acting as a reliable heavenly patron saint of Rus-Ukraine. Olga is dressed in the clothes of the noble Ukrainian woman of Mazepa times and is depicted not with a traditional cross, but with a gold vessel, which she opens, gracefully lifting its lid. The vessel in her hands is a symbol of the spiritual healing that the Holy Princess gives from God to her people. It is possible that in the images of Volodymyr and Olga could see the symbolic parallel of Hetman Mazepa and his mother Maria Magdalen. The Chapel of Mazepa also preserved the majestic images of the Slavic high school teachers Cyril and Methodius, the first Metropolitan of Kyiv, Mykhailo Syryn, the Holy Martyr Macarius of Kyiv. 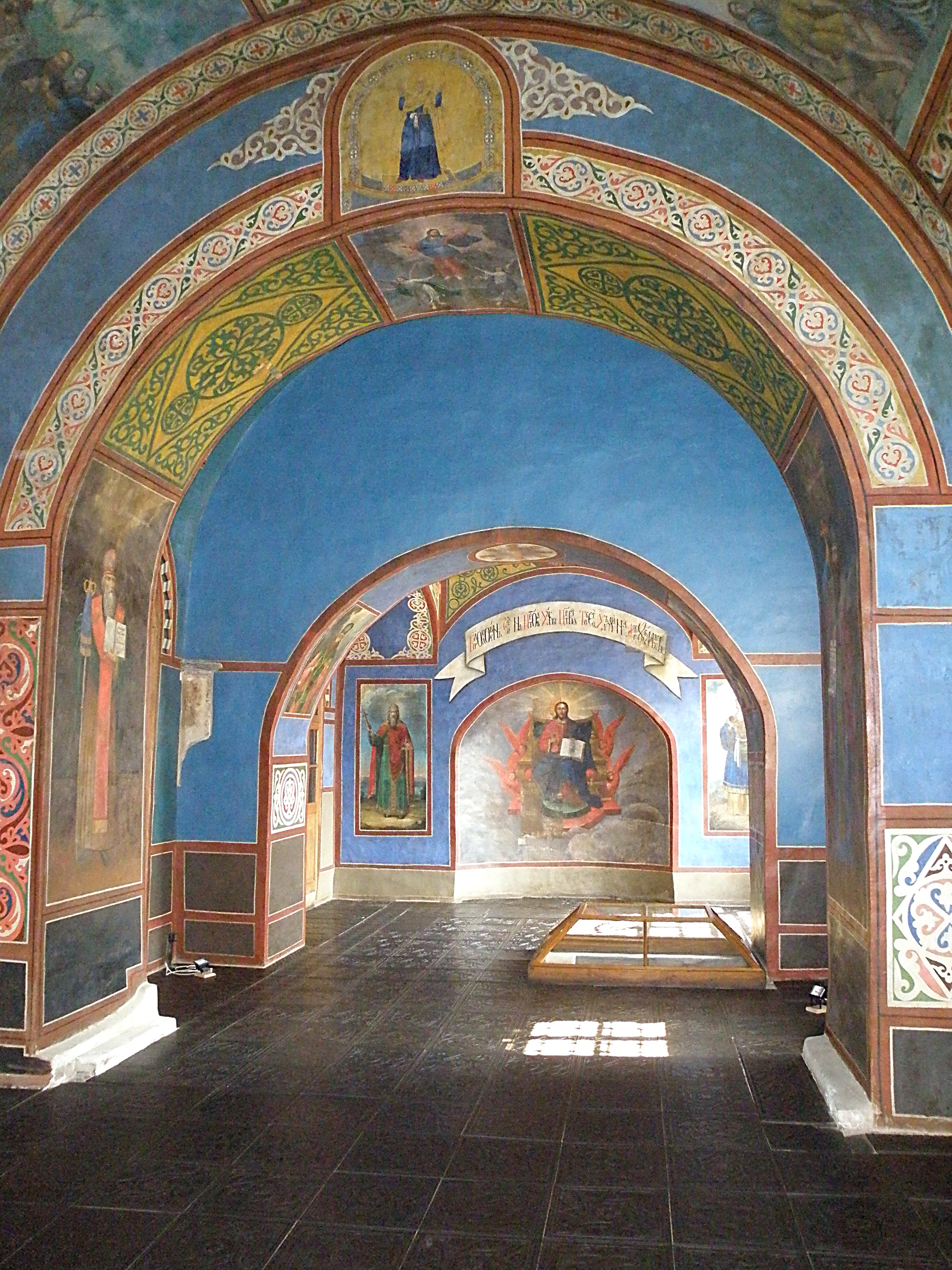 The scenes on the baptism of Rus intertwined with the Mother of God scenes make up an interesting ensemble of painting of the 16th century, preserved in the Assumption alter. This alter, created on the site of the eastern part of the ancient outdoor gallery, looks like a lush palace hall decorated with scenes reminiscent of salon paintings. Here, in addition to the large title composition “Assumption of the Virgin” on the western wall and placed in the landscape scenes on the high vault, we see interesting Kyiv subjects – “Princess Olga at the urn with the ashes of Igor”, “Choice of faith by Prince Volodymyr”, “Baptism of Kyiv”.

Relevant for those times images of the seven Ecumenical Councils appear in the first third of the 18th century in the central part of the temple, which surrounded the dome space with a magnificent frieze. This cycle preserves the image of the First Ecumenical Cathedral above the western entrance arch of the central nave. It is a solemn composition filled with figures of ten hierarchs in lush holy shirts and numerous images of laymen. The center of the composition depicts Constantine the Great sitting on a throne, holding in his hands the attributes of royal power – sphere and scepter. Images of ten hierarchs are beside him, behind which laymen are depicted. The figures of hierarchs resemble portraits of ten Moscow patriarchs of the 17th century, and the images of laymen – the Cossack officers, among whom is the image of Hetman Mazepa This composition originated during his reign, at the beginning of the 18th century. It embodied the idea of ​​equality and cooperation between the state and the Church, relevant to the Hetmanate period.

The ideological and artistic dominance of the iconostasis is the silver Holy Gate. This outstanding work of Ukrainian Baroque was made for a new iconostasis, created in the middle of the 18th century under Metropolitan Rafail Zaborovsky (1731-1747) and Tymofiy Shcherbatsky (1748-1757). Rumyantsev’s Chronicle of 1747 mentions that this gate was made by the Kyiv-Podolian goldsmiths Semyon Taran, Petro Volokh, and Ivan Zavadovsky. In 1934, the Holy gate was removed from the iconostasis and split into pieces for remelting. About 50-60% of the original gate has been preserved. At the beginning of the 21-st century the gate was reconstructed, restored and in 2008 installed in its place in the iconostasis of Sophia Cathedral. On July 25, 2008, the Holy Gate was opened and consecrated by the Ecumenical Patriarch Bartholomew I at the state level.