The fresco ensemble of the monument is distinguished by amazing integrity, artistic perfection and originality. The authentic St. Cyril’s Church frescoes of the twelfth century in a number of 800 m2 have no equal among the simultaneous paintings of sacred buildings of Eastern Europe in terms of quantity, plot content and quality of execution.

The arrangement of the plots of the frescoes corresponds to the canonical scheme of the heavenly hierarchy developed by the Church. Monumental figures of the twelve apostles are located in the windows of the drum of the cupola. Four evangelists are inscribed on the pendentives (architectural spherical triangles, which are used to make the transition from the drum circle to the drum square).

The central arches supporting the drum of the cupola are decorated with images of the Forty Martyrs of Sebasta in medallions connected by painted loops-rings. In the central apse there is a figure of the Mother of God Orans (the Praying One) with her hands raised in prayer. Most of the composition is an oil painting of the nineteenth century, and the edge of the blue chiton of the Mother of God and the podium on which she stands have been preserved from the ancient fresco image. Near Orans there is a fresco composition “Eucharist” – a scene of the communion of the apostles. Under the “Eucharist” – “Holy Order”, or “Adoration of the Sacrifice”.

On the pillars of the triumphal arch, in the middle horizontal register, there is a biblical story “The Meeting of the Lord”, which is rarely depicted in this place. The Cyril’s “Meeting” depicts the holy family – Joseph and Mary with the little Christ in their arms – on the northern altar pillar. They go to the church. The holy family is greeted by the elder Simeon and the prophetess Anna, whose images are made on the west side of the southern altar pillar. The image of Simeon the God-receiver impresses with mastery. 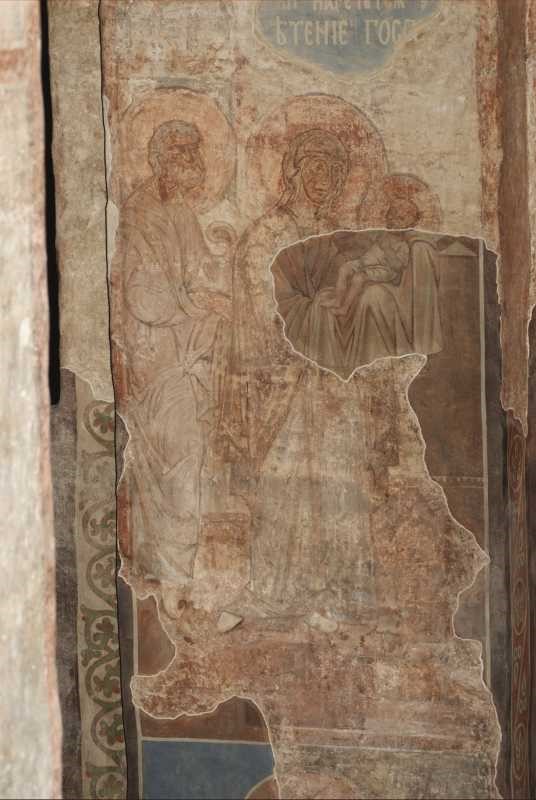 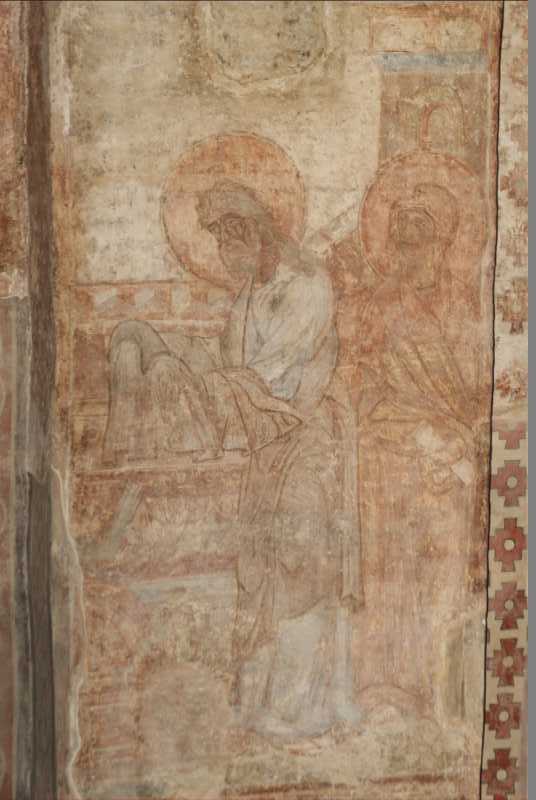 Under the composition “The Meeting of the Lord” we see majestic monumental fresco figures of the apostles Peter and Paul – governors of the Church of the earth.

On the south wall of the transept on a large square there is a composition “The Nativity of Our Lord”. This festive plot, as if woven from individual miniature scenes, marks the coming of the Savior into the world.

Of great interest is the unique fresco cycle of the southern apse. These are vivid detailed life scenes of paired saints – the glorious bishops of Alexandria Cyril and Athanasius, this is a painting that has no analogues in the ancient monuments of the entire Byzantine-Balkan circle.

Although the paintings preservation is not complete, they are the best of all the frescoes in the monument. The color range is red, blue, green and yellow pigments. The manner of execution resembles a book miniature. The frescoes of the diaconicon, united by a plot, form a consistent story, which introduces the viewer to the realities of church life of the third-fifth centuries. Egyptian Alexandria and the period of early Byzantium.

There are sixteen life scenes on the walls of the southern, or the Cyril’s apse; twelve of them have survived in the technique of fresco painting: “Cyril writes the commandment of God”, “Cyril teaches the king”, “Cyril teaches in the cathedral”, “The Virgin blesses Cyril and Athanasius”, “St. Cyril exposes heretics”, “St. Cyril preaches the true faith”, ”Saint Athanasius in a boat”, ”The funeral of St. Cyril”, “The funeral of St. Athanasius” and others.

The painting of the altar, or the northern apse of the Cyril’s Church, represents plots that do not find direct analogies in ancient monumental art. In total, the walls of the apse embody the images of 37 Balkan saints, most of whom are preserved in the fresco.

On the walls of the cathedral you can see five frescoes of soldiers. One of them differs from the others by its original interpretation. Arrogant imposing figure and precious clothes testify to the fact that it depicts not an ordinary warrior, but a prince-commander.

In the narthex, the grandiose composition “The Last Judgment” attracts attention. The giant fresco occupies the entire area of ​​the walls of the narthex, goes to the pillars and arches, pilasters and box vaults. In monumental church painting, this plot is spread in Rus’ in the monuments of the twelfth century. In St. Cyril’s Church, this composition can be considered as the earliest and best-preserved image of the Last Judgment in ancient Rus’ art.

Slavic inscriptions accompanying the ancient painting testify to the execution of frescoes by Kyiv masters, who, following the Byzantine and Macedonian traditions, created their original fresco ensemble, insisting on local ancient Rus’ decorative and painting traditions.

The frescoes of St. Cyril’s Church, in comparison with the frescoes of other modern churches of Rus’-Ukraine, are distinguished by the best preservation and the greatest completeness, integrity, ideological content, artistic perfection, originality.