Home » Monuments reveal: from scientific works of employees » The Christianization of Rus-Ukraine by Saint Volodymyr and his image in Sophia of Kyiv

On July 28 (15) we celebrate the memory of the holy co-apostolic prince Volodymyr and his Christianization of Rus-Ukraine. Prince Volodymyr died on July 15, 1015, and the state commemorative date in Ukraine in honor of his Christianization of Rus is timed to the day of his death. It is a holiday of universal scale, which was established in Ukraine as part of the celebration of the 1020th anniversary of the Christianization of Kyivan Rus in accordance with the Decree of President of Ukraine Viktor Yushchenko of July 25, 2008 “On the Day of the Christianization of Kyivan Rus-Ukraine.” However, this date is conditional, as sources do not say when exactly it was baptized. According to our hypothesis, the day of the Christianization of Rus-Ukraine is not the date of Volodymyr’s death, but the day of his baptism, which coincides with the consecration of the two main churches of Kyiv – the Church of the Tithes (May 12, 986) and St. Sophia of Kyiv (May 11, 1018). It was on the night from Saturday to Sunday (as required by the canons), from 11 to 12 May 989, that Volodymyr and his warriors, as they said at the time, “all of Rus”, were baptized. The memorials of this event were the Church of the Tithes and St. Sophia of Kyiv.

There is no exact information about the beginning of church veneration and official canonization of Prince Volodymyr. This is not surprising, because the Byzantine Church was very conservative in this sense. It canonized only a few kings, mostly those whose names were associated with the Ecumenical Councils. However, sometimes the canonization took place, so to speak, “from below”, at the local level in those countries that were part of the Byzantine ecumenism. This is what happened in Rus-Ukraine. Based on the analysis of ancient Rus texts, it is believed that the first experience of the church work about St. Volodymyr was “Memory and Praise to Prince Volodymyr of Rus”, written by Jacob Chornoryzets not earlier than the second half of the 11th century. Since Jacob says that in his time Volodymyr was not revered for his merits, that is, as a saint, researchers believe that “Memory and Praise” was written before the canonization of Volodymyr on the basis of oral tradition, “very fresh and trustworthy,” and this is very old monument was compiled before the Initial Chronicle. It is believed that the inclusion of the name of Volodymyr in the church calendar of July 15, i.e. the official canonization, probably took place around the middle of the 13th century. The first reliable evidence of the church’s veneration of Volodymyr as a saint dates back to the 14th century: all Prologues and theological books of that time contain the memory of St. Volodymyr on July 15. However, historians have put forward a version of the canonization of Volodymyr in pre-Mongol times. Already in the “The Sermon on Law and Grace” of Metropolitan Hilarion of Kyiv, a contemporary of Volodymyr and Yaroslav, Volodymyr is called “blessed.” Addressing Volodymyr, Hilarion claims that this is what the people call him “with inspiration and without a doubt, as the Savior himself called you.” That is, Volodymyr was revered by the people of Rus as a saint in the first third of the 11th century. The Church calls blessed the holy ascetics, whose glory is attested by the people themselves.

The initial stage of the canonization of Volodymyr had to be accompanied by the appearance of the first icons of the prince, which were based on the church canons was his prototype, reflecting the real features of the saint. However, ancient images of Volodymyr as a saint have not survived. In later memoirs, he appears as a gray-bearded, handsome old man who bears no resemblance to the authentic image of the prince on his coins. This is due to the rather late official canonization of Volodymyr, and hence the lack of a long iconographic tradition. To determine the time of the canonization of Volodymyr and to identify his first portraits, we proposed to use the oldest authentic source – the monumental painting of Sophia of Kyiv. Today it is known that the mosaics and frescoes of the cathedral appeared not later than 1018 – 1019, i.e. at the time of its creation, as these dates appear in the oldest graffiti on the walls of Sophia. The wide and consistent glorification of the princely couple of the Christianisers of Rus – Volodymyr the Great and Anna Porphyrogenita, traced by us in the mosaics and frescoes of Sophia, testifies to the fact that their names were preparing for canonization in the second decade of the 11th century. Volodymyr and Anna appeared on the prince’s portrait in the center of the cathedral as an equal apostolic royal couple leading Rus to the altar of St. Sophia of the Wisdom of God. The unique secular frescoes of the two stair towers leading to the princely choir depict the dynastic marriage of Volodymyr and Anna in Constantinople at the turn of 987/988, which marked the beginning of the Christianization of Rus. The southern (male) tower shows the reception of the marriage embassy of Volodymyr by Emperor Basil II, Anna’s brother, at the hippodrome – the forum of the Byzantines. The northern (female) tower depicts the coronation of Anna during her engagement to Volodymyr, when she was crowned with the royal crown as the Caesar’s fiancee. That is why Volodymyr on his coins and Anna in all miniatures appear in the royal attire, Anna is invariably called the queen in the sources. In the frescoes of the towers, the image of Volodymyr is found many times in numerous hunting and theatrical plots, which illustrate the marriage ceremony of the engagement of Volodymyr and Anna. This was not previously known and these plots were perceived separately and quite abstractly, without concretizing events and persons, as a kind of entertainment of the feudal nobility.

In religious stories, Volodymyr and Anna are glorified through their holy prototypes as “new Constantine” and “new Helen”, “new king Hezekiah” and “righteous queen”, and so on. Of great interest is the image of Volodymyr on the fresco of the nave of St. Michael’s altar of the Cathedral “The Appearance of the Archangel Michael to Joshua.” The frescoes of this altar contain a hint on the theme of the Christianization of Rus, because the Archangel Michael – the patron saint of the prince and his wife, who was considered a helper to Christians in the fight against pagans. Impressive is the unusual image of the companion and successor of Moses – Joshua, who introduced his people to the Promised Land and was perceived as a prototype of those Christian rulers who defeated the barbarians. This tradition penetrated into Rus in the late 10th century, where local scribes compared Volodymyr to Joshua. In the Sophia fresco, Joshua, communicating with the archangel, stands in front of his soldiers. He is dressed in the attire of the royal Byzantine general: a purple mantle over military armor, on his head – a leather helmet with a cape for the neck. The clearly portrayed face of Joshua differs markedly in its Nordic type from the Semitic appearance of the fellow travellers. Joshua has overhanging eyebrows, a well-defined aquiline nose, a large heavy chin, and a dug-out lower lip. It is noteworthy that, like Volodymyr on his coins, Joshua has an accentuated lower jaw with a protruding massive shaved chin, which gives him a special courage. Such a portrait does not correspond to the iconography of Joshua in other monuments, where he is depicted as an outspoken Semite. Evidently, the Sophia image of Joshua was inspired by the will of Prince Volodymyr himself as the victor over paganism and the builder of Sophia of Kyiv. 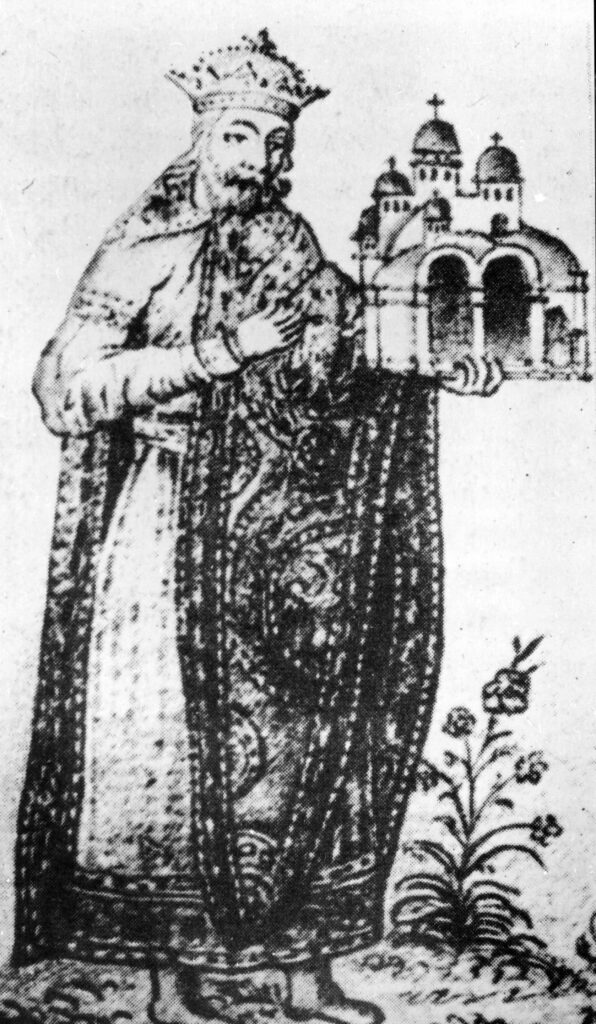 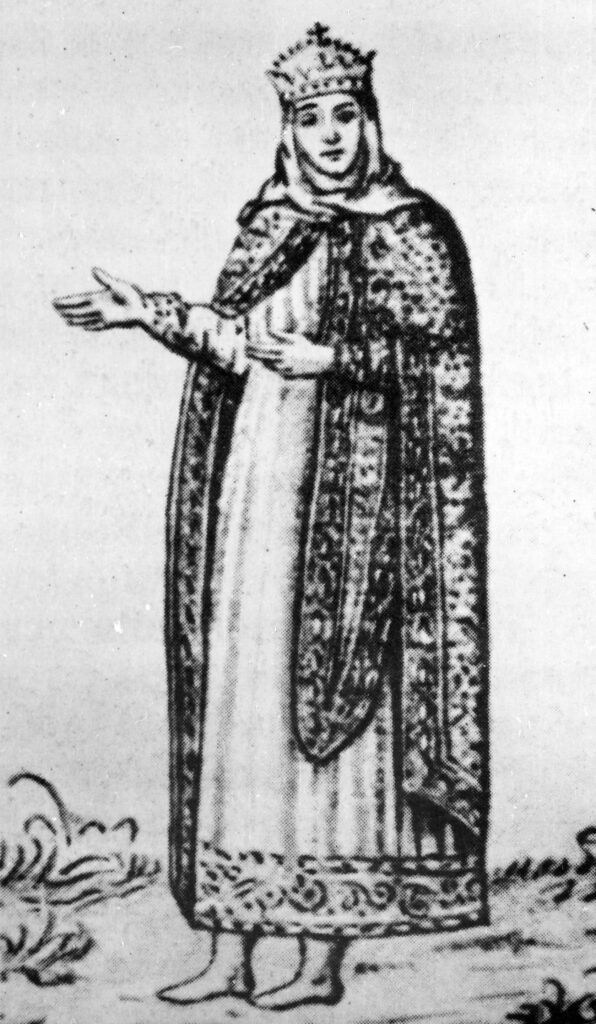 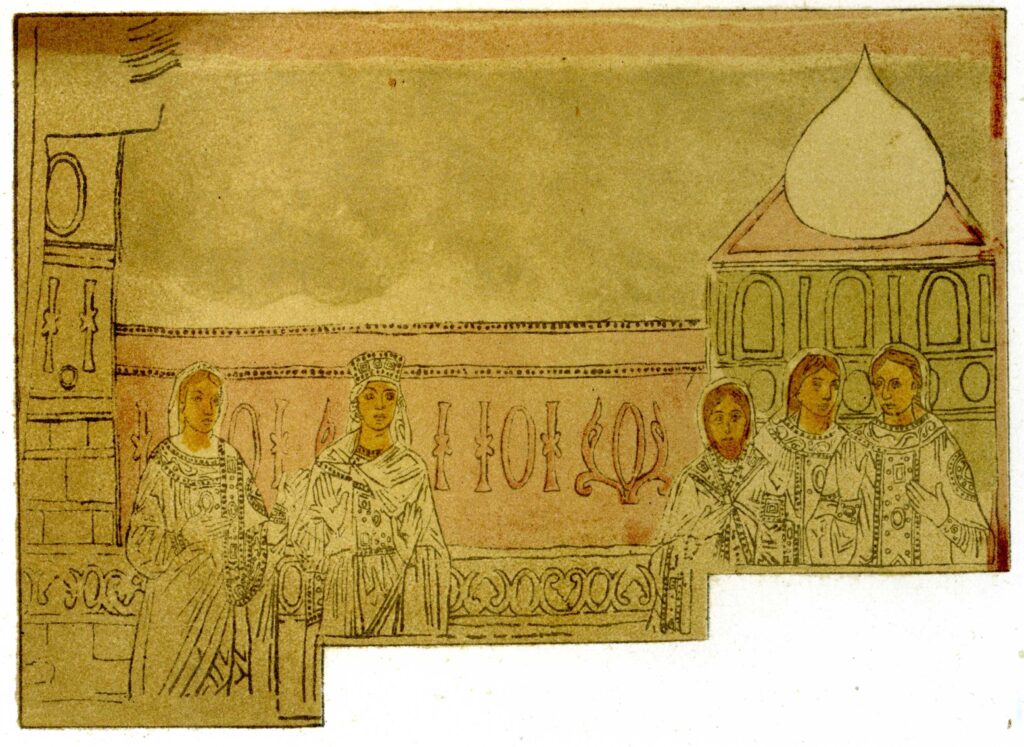 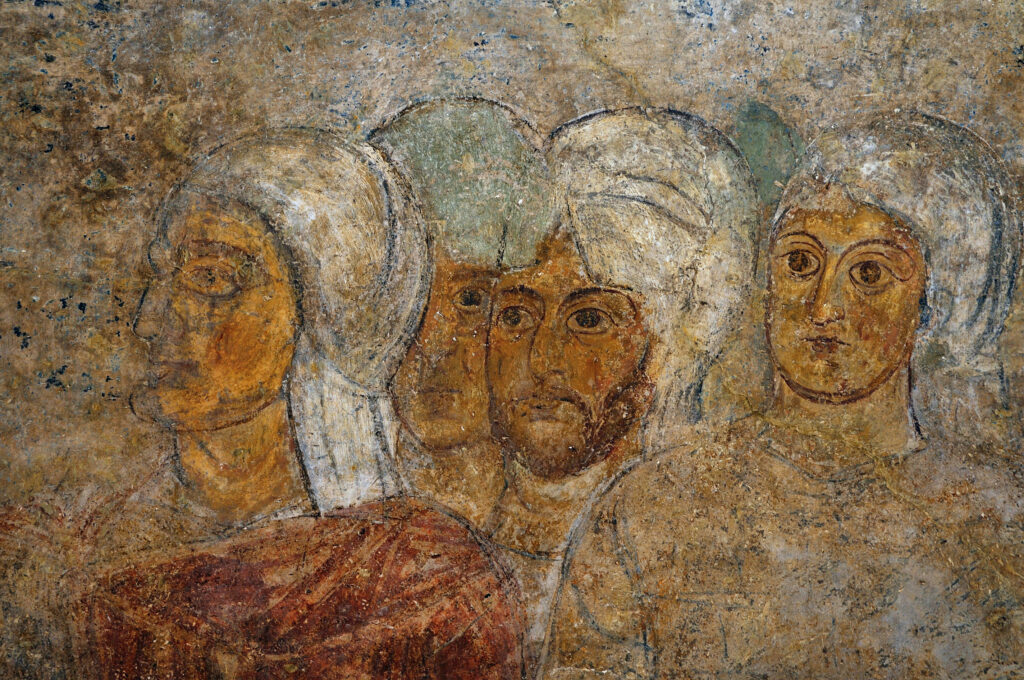 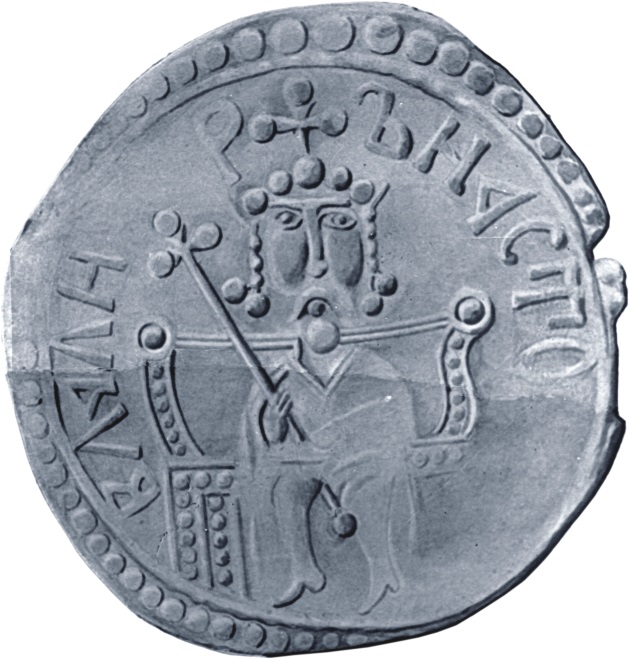 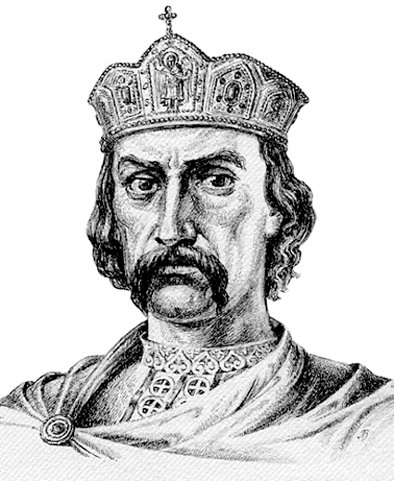 Nikitenko N. (2017) Volodymyr Velykyi I Sofiia Kyivska [Volodymyr the Great and Sophia of Kyiv]. Sophiia Magazine, vol. 1, Proceedings of the VIII International Scientific and Practical Conference “Sophia Readings”. To the 1000th anniversary of the memory of the Grand Prince of Kyiv Volodymyr Sviatoslavych and Saints Borys and Hlib: 1015 – 2015 (Kyiv, November 26 – 27, 2015), Kyiv, pp.306 – 327.

Nikitenko N. (2021) Volodymyr Velykyi na freskah Sofii Kyivskoi [Volodymyr the Great on the frescoes of Sophia of Kyiv], Proceedings of the IX Sudak International Scientific Conference “Black Sea Coast, Crimea, Rus in History and Culture”, dedicated to the 100th anniversary of the birth of the architect-restorer E.I. Lopushynska (Kyiv, September 24 – 25, 2020), Kyiv, (in press).

Prepared by Dr., Prof. N. Nikitenko, Head of the Research Department of the St. Sophia Institute of the National Conservation Area “St. Sophia of Kyiv”.