The frescoes of the Sophia of Kyiv founded under Volodymyr the Great (1011-1018), who brought Christianity from Korsun (Byzantine Kherson), embody the idea of ​​a mystical “settlement” of the Korsun saints in Kyiv. Of great importance in this sense are the frescoes of the composition “Holy Order” of the northern side St. George’s altar. The composition is located in the apse, three figures of saints on each side of the window. Among the saints here are Epiphanius of Cyprus, Vlasios of Sebaste and Martin the Confessor. Saints Vlasios and Epiphanius have been especially revered in Rus since the time of Volodymyr. Vlasios was the patron saint of cattle and replaced the pagan “beast god” Veles. And on Epiphanius Commemoration (May 12), the Tithe Church built by Volodymyr was consecrated. Interestingly, the image of the famous Korsun ascetic Martin the Confessor, the Pope (649 – 653/655, commemorated on April 14/27), whose temple-memorial (his remains have survived) existed in medieval Kherson (ancient Chersonesus), was introduced into this series of saints. Martin the Confessor is depicted the second on the south side of the apse (if you move towards the east). His beautiful image is a perfect and very expressive work of art. What did this saint become famous for? He is called one of the noblest among the Roman pontifex successor of the Apostle Peter. Saint Martin the Pope was a Confessor, because in spite of all his sufferings and torments, he devoted himself to the righteous Christian faith to the very end, that is, he sincerely professed it. He was a man faithful to the church canons, educated and noble. Before the election of the Pope in 649, St. Martin served as papal nuncio in Constantinople. He suffered for refusing to accept the dogmas of the Monophelites – supporters of the doctrine that although Christ has two natures – divine and human, but only one will – divine. After severe persecution, he, already dying, was sent into exile in distant Kherson, where the saint died of starvation on September 16, 655. Pope Martin was buried in the Crimean Kherson, in the church of the country monastery of St. Mary of Blachernae, with which researchers identify the Southern country cross-shaped church. The relics of the Holy Pope were endowed with healing power and attracted a large number of worshipers. According to tradition, when transferred to Constantinople, and then to Rome, part of the relics of St. Martin was to be left in Korsun, the site of this saint’s feat. It is quite probable that Prince Volodymyr, among other relics mentioned in the chronicle of Korsun, together with the relics of Pope Clement, who died in Korsun in 101, could have brought to Kyiv the relics of St. Martin the Confessor. Apparently, this fact contributed to the placement of the image of Pope Martin in the altar of the main cathedral of Rus, the founder of which Prince Volodymyr was baptized in Korsun, so he had to honor his great shrine in Kyiv.

Prepared by the head of the research department of “St. Sophia Institute” 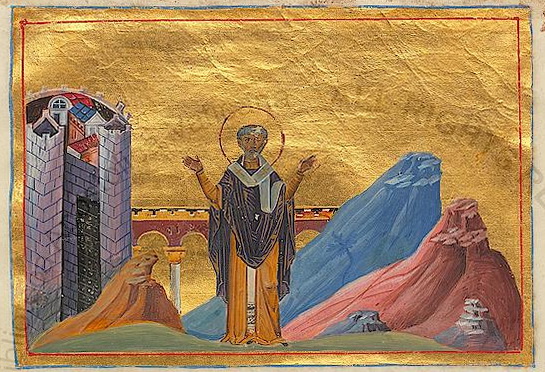 St. Martin the Confessor. Miniature of the Byzantine Menology. 985.