Addressees of correspondence of Kyiv metropolitans  of the 11th-13th centuries

Home » Monuments reveal: from scientific works of employees » Addressees of correspondence of Kyiv metropolitans  of the 11th-13th centuries

Addressees of correspondence of Kyiv metropolitans  of the 11th-13th centuries

As is known, the metropolitans of Rus in the 11th-13th centuries subordinated to the Patriarch of Constantinople, and their residence was in Kyiv. Since St. Sophia Cathedral at that time served as a cathedral, it is believed that the metropolitan palace was also located somewhere nearby – within the modern National Conservation Area “St. Sophia of Kyiv”.

The complex of buildings of the residence of the church hierarchs of Rus, among other things, was to include premises organized in the style of a kind of post office: there were stamped original letters and orders, as well as kept archive of correspondence. Unfortunately, neither the mentioned palace buildings of the Kyiv metropolitan nor the related archive have been preserved so far. However, during archeological excavations seals are found sometimes that affixed ancient postal items, and these findings can be used not only to establish the geographical boundaries of the territory covered by the correspondence of church bishops of Rus, but sometimes even to identify specific recipients of metropolitan correspondence.

The hanging seals, which will be discussed in this essay, are small lead disks with a diameter of 1.5 – 3 cm with images of saints imprinted on them on both sides and the so-called legends – multi-line inscriptions with information about the owners. These disks were equipped with through holes for laces, laid along the frames of seals: when sealing correspondence, a lace was stretched through the hole of the workpiece, and then it was compressed with special heated pliers, which left imprints on the lead surface in the form of various images or inscriptions.

Only a quarter of the now known seals of the Kyiv metropolitans of the 11th-13th centuries was found during archaeological excavations; all others are mostly undocumented items obtained by treasure hunters, which makes it impossible to establish a specific location for most of them. However, the available information on the geographical distribution of even part of the seals suggests that in the 11th century the correspondents of the Kyiv metropolitans were in Kyiv itself, in the territory of modern Kyiv, Zhytomyr, Chernihiv, Sumy, in the northern Rus Biloozer (modern territory of the Russian Vologda region) and in the Byzantine Constantinople (modern Istanbul in Turkey). In the 12th and first half of the 13th century Romanian Galatia, Crimean Chersonese, as well as ancient Rus Novgorod in the north, the Kaniv frontier in the south, and the territories of the Galicia-Volyn and Turov principalities in the west were added to the area of ​​distribution of metropolitan correspondence.

Unfortunately, it is almost impossible to specify to whom exactly the metropolitan letters were addressed in the indicated geographical points and localities. But interesting information about the addressees of correspondence of Kyiv metropolitans of the 11th-13th centuries can be obtained by studying the seals found within the estate of the Kyiv St. Sophia Cathedral, i.e., where, in fact, the metropolitan residence was located. Until recently, only six lead seals were found in the area in different years during archaeological excavations (Illustrations 14 – 19). Thanks to the latest research in 2018-20, this collection has been replenished with four more copies (Illustrations 20-23) and now consists of nine different bullas and one lead blank for printing. ***

Only two finds from this community come from ancient cultural layers, in particular: a blank of a medieval seal, found in 2018 in the cultural layer of the 14th-15th centuries, 25 m northwest of the cathedral (Illustration 21), and a seal with a two-sided legend with a Greek text, which mentions a Byzantine official (“oikist, and now vestiarii”) named Basil, found in 2019 in the layers of the late 11th – early 12th century 20 m west of the cathedral (Illustration 21).

It is important to note that among the correspondence kept at the Kyiv Cathedral were also letters from the metropolitans of Rus themselves, apparently written during their travels outside Kyiv. In particular, the mail of Metropolitan Heorhii could be addressed to the Kyiv metropolitanate around the mid-1070s, when the bishop was in Byzantium for a long time, leaving Rus in protest against the princely strife of the Yaroslavychi.

Incidentally, the aforementioned Patriarch of Constantinople Eustratius Garidas during his short service as hierarch of the church did not excel in any outstanding deeds, so he was soon dismissed on the initiative of Emperor Alexius I Komnenos. Instead, the sister of the same emperor, Maria Komnenos, held the extremely honorable title of panhypersebasta (“revered above all”) in Byzantium, which she acquired through her husband, Michael Taronites, and who, even without her own name, marked on her personal seals until her death.

No less interesting, though unknown from written sources, was also the above-mentioned Byzantine official Basil. Probably during the reign of Emperor Alexius I Komnenos as a result of the introduction in Byzantium in the late 11th century reform of the state bureaucracy, this man was forced to change his place of service, as reported in the text of the legend of the personal seal. Specializing in the accounting of imperial wealth, Basil was apparently transferred from the then abolished “office” of the Oikistes, who took care of the estates of the ruler of the state, to the management of the vestiarians, who served the expenditures of the imperial treasury. Therefore, it is possible that the correspondence of this official with the Kyiv metropolitanate concerned certain funds for the maintenance of the church bishop of Rus, which in the form of the so-called “ruha” could be provided by the Byzantine emperors to the Kyiv metropolitans.

Finally, it should be noted that all the seals found so far in the estate of Sophia of Kyiv date only to a few decades at the turn of the 11th-12th centuries. The seals of the first half of the middle of the 11th century have not yet been found in this area. or the second half of the 12th – first half of the 13th century, as well as later times, with the exception of the above-mentioned blanks of the seal of the XIV-XV centuries. ****

In addition, we will remind that practically all ancient Rus seals found so far on the territory of Sophia of Kyiv were found in later layers of the 17th-18th centuries. What can this mean? There seems to be only one logical answer to this question.

After the final decline of the Kyiv metropolitanate in the 15th century the Sophia residence of the church bishop was probably abandoned and gradually destroyed. It is even possible that it died from one of the historical fires, for example, during the robbery of Kyiv by the troops of the Crimean Khan Mengli-Giray in 1482. Later there was a so-called archaeologization of the buildings complex of the former residence: their ruins were gradually leveled, and hollow parts were filled with garbage, among which were to be the remains of the metropolitan archives. At the same time, the parchment scrolls gradually faded in the ground, leaving only the lead seals that had once been attached to them.

Probably around the 17th century during the reconstructions in the estate of St. Sophia of Kyiv, some earthworks partially affected the location of the former metropolitan archive, revealing accumulations of seals in the ground, which became a kind of souvenir for the fraternity of the then restored St. Sophia Monastery. But later those “souvenirs” were mostly lost again in different parts of the monastery estate: during archeological excavations they were found mainly under the floor of the 19th century in St. Sophia Cathedral and in the locations of fraternal cells of the 5th century. The fact that in early modern times only the seals of the second half of the 11th – first half of the 12th century were found may indicate that in the most ancient archive the correspondence was sorted chronologically (and later archeologized according to the same principle). At the same time, the accidental excavation of the 17th century probably affected only a small part of the ancient archival collection, most of which (with seals of earlier and later times) remained unexplored, still preserved in the cultural layers on the territory of Sophia of Kyiv.

Finally, it opens up a fascinating prospect of discovering in the future on the territory of the National Conservation Area “St. Sophia of Kyiv” the remains of an ancient metropolitan residence with a huge collection of seals of the 11th – 15th centuries preserved in its foundations. Such a discovery, no doubt, would be one of the brightest discoveries in the history of the study of ancient Rus and Byzantine antiquities in modern Ukraine. 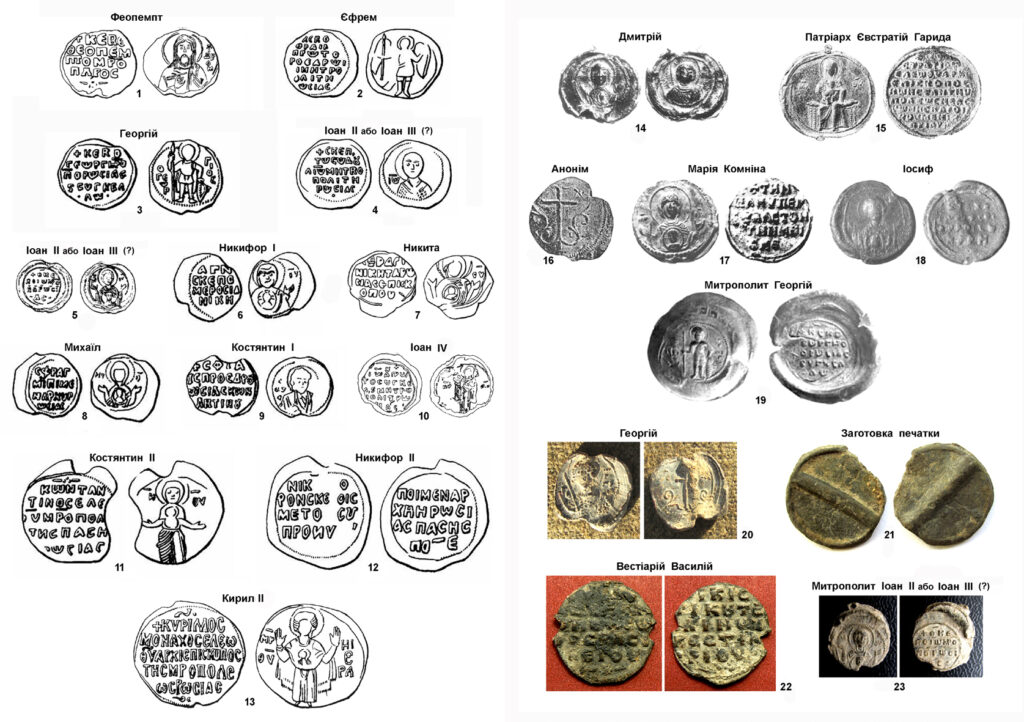 * The most common among the finds are lead hanging seals, which are called molybdenum. Seals made of silver (argyrobullae) and gold (chrysobullae) are much less common.

*** From the territory of the National Conservation Area “St. Sophia of Kyiv” come four more lead seals of the 11th-12th centuries, which are not taken into account in our essay. They belonged (one copy each) to the widow of Prince Iziaslav Yaroslavych Olisava, the wife of Prince Vsevolod Olhovych Maria, Metropolitan Heorhii and the boiar Ratybor. These seals were found in 1909–10 during excavations of the remains of the 11th century church, which most researchers define as the chronicle church of St. Iryna, built by Prince Yaroslav the Wise around 1037. Since this church was located at a certain distance from St. Sophia Cathedral and in the 11th-13th centuries occupied a separate monastery estate, we have no reason, except for the metropolitan seal, to consider these findings in the context of the archives of the metropolitans of Kyivan Rus.

**** Finding a blank seal of the 14th-15th centuries testifies to the functioning of the metropolitan “post office” in Kyiv even after the Mongol invasion, until the decline of the residence of the church bishop in the 15th century.

1 – 13. Drawings of the main varieties of hanging seals of Kyiv metropolitans of the 11th-13th centuries (according to V. Yanin and P. Haidukov).

14 – 23. Photos of finds of hanging seals of the 11th-12th centuries in the estate of St. Sophia Cathedral in Kyiv (after V. Bulhakova, V. Savytskyi and T. Bobrovskyi).

Text and illustrative material prepared by

Senior Researcher of the